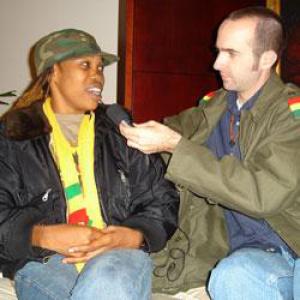 Queen Ifrica, your debut album, 'Fyah Muma', has finally been released. Tell us a little bit about the album.
Queen Ifrica: "Well, as you say, it's my first release and my fans have been waiting for it for a while. I wanted it to be just right and we're always working on the time of the Almighty so... He said: "The time is now!" so here it is."

Wasn't it originally supposed to be released on the French Jahmin' label that also released Tony Rebel's 'Connection' album?
Queen Ifrica: "Yes, but it never manifested. It never happened because of their bankruptcy."

How did you hook up with Tony originally?
Queen Ifrica: "I hooked up with Tony when I was performing on a tribute to Garnet Silk show. Tony was scheduled to perform there but I really went as a patron. I wasn't planning on getting on the stage but my friends pushed and persuaded me. Tony then heard me and told me I sounded just like Garnet. He then invited me to visit him at Flames and I've been there ever since."

Musically you chose to walk the conscious path in your career, not delving into raw dancehall. Was that an easy choice?
Queen Ifrica: "Yes, I would say so. I was born and raised in the Nyahbinghi Order. That's a Rastafarian movement in Jamaica. It's a very cultural movement that deals with positivism and upliftment. Growing up with these roots it was inevitable for me also to walk that path. Choosing to do so was choosing to share a part of me with the world. I think as a female artist it gives me a lot of credit and strength to go ahead and continue. A lot of artists don't take that road because it's hard and things don't come easily, but I embrace this cultural message with all my heart."

Rastafari is still seen by many as being a patriarchal religion, philosophy or way of life. How do you see your role as a female Rastafarian?
Queen Ifrica: "I see myself as a little light. We're in an industry that promotes sex as the ultimate thing. Sex is everywhere and it's the easiest way to gain money and recognition. Just take your clothes off, go on stage and say something derogatory and you're on top. I believe this world is filled with many different types of people and I especially look out for the younger children, the young girls who are looking for someone to emulate or to look up to. Slackness is there on a regular basis, so chances are they are going to look up to that. It warms my heart then, when I walk down the streets and young girls come up to me begging me not to change because I inspire them. We have testimony of young men who turned away from violence after we had visited their community to talk to them and show them another way. I think I can freely say that I am proud of the position I'm in."

One of your colleagues, Tanya Stephens, put out a tune called 'Do You Still Care' on her latest album 'Rebelution' in which she ingeniously tackles the whole homophobic trend that is going on in Jamaica right now. Where do you stand on that topic?
Queen Ifrica: "I'm not going to mince words when I say that homosexuality or sodomy are wrong, but people always have the right to choose what they want to do in life. It's not up to me to go around and impose my beliefs. I'm not going to waste my time to put something on paper that is there to judge someone, I prefer to uplift. Tanya has a very free spirit. She always says what she feels and makes that very clear in her songs. I can't bash her for doing that, but speaking on the whole, there are things going on in the world that are much more destructive to us and we should really be focusing on those larger issues instead of on these things that aren't necessarily the issues we should be worried about. There's the genocide in Darfur, famine in Ethiopia, there's the wars in Iraq and Afghanistan. We need to remind people of those issues and keep them focused. Good and evil were both created by man. It's upon us to choose on which side we want to be."

I read in the Jamaican press that Marcus Garvey finally got his own museum on the island just recently. Being a Rastafarian, what does he represent to you?
Queen Ifrica: "He was an eye-opener for the black race in terms of the fact that he made us remember the oppression and the way we ended up in the west. And he remembered us of the fact that there's a place called Africa, where we al came from. Sir Marcus was that voice that we all heard and looked up to and that told us: "Look towards your homeland, love yourself, remember who you are no matter what your surroundings are.". I think that over the years we have moved away from our culture. We've become more Americanized. We're not worried about the struggle anymore because we have plenty of food and we can move from one place to the next without harassment. The passion is not there anymore. The Rastafarians are now the only ones who are still shouting: "Repatriation! We have to go back!", but even they are not hiring a ship and making the crossing. It's mostly words nowadays, but they say that word is wind, so it is still important that we use them to remind ourselves of who we are and what Marcus Garvey stood for. He should have gotten a museum a long time ago!"

Let's get back to your music now. At which stage in your life did you become musically involved? When did the whole singing thing start?
Queen Ifrica: "I came from a very strong musical background. Reggae grew out of Ska and Derrick Morgan was my father, so I think I can say music was always in me. The passion to say: "I want to be a part of it!" came out of the fact that people who heard me sing were always telling me: "Girl you have a great voice! You should take that thing serious!". And then there was the meeting with Rebel at that Garnet Silk show I just told you about. I love Garnet Silk and I can easily say he's the main reason why I started to sing. When I heard him for the first time, he did something to my spirit. I've never since heard anyone who could sing with that kind of a connectedness to the soul. After he died I began to sing his songs on stage and while doing that I met Rebel at that tribute show that night. He told me I had a great talent, that was different from everyone else and that made me take it much more serious from then on and made me realise that I could use my voice to make a difference."

I want to end this interview by giving you some words and you can just respond by telling us what they mean to you. Let's start off with: women?
Queen Ifrica: "(laughs) Women are the reason why the world is as it is today. I think women can make a difference because all the world leaders, all the gangsters and all people who create turmoil have women and go home to women and go home to families. I know a man is at his most vulnerable when he is in the bedroom and that is when a wife, a girlfriend, a sister or a mother can have their say. We can support our men, but not to destroy ourselves! And believe me women know how to get men to do what they want. (laughs). Women also need to become less selfish, less wanting. If we do all that we can help in creating a better world."

Music?
Queen Ifrica: "Music is the healing force for all nations. No matter what language you speak, no matter what culture you're from or what your race is, music is universal, it's life. It's always there to soothe you, to calm your spirit. Music is a very great force of change. If it is used wisely and for the right purpose, it can create great and positive things."

As a last one then: His Imperial Majesty?
Queen Ifrica: "His Imperial Majesty is the ultimate force. Whether you worship him as the Almighty or not, just by reading his speeches and his words you will find that we would have far better world leaders if they could all take up the philosophies of His Majesty. He said: "A great leader can also be a good subordinate.", so if you want to move ahead and lead, you also have to be able to listen. He set a very good example in every field."