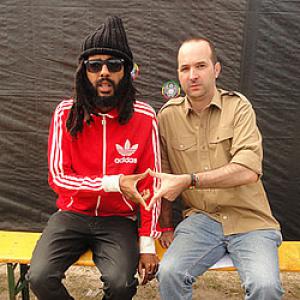 Protoje you were born into a musical family; your mother being singer Lorna Bennett and your father a St. Vincentian calypsonian. At which point in your life did you realize you also wanted to follow that musical path?
Protoje: "I guess that must have been from around the age of ten as it was around that age I first started to get the urge to go on stage and sing. I've always felt I communicated best with people telling my story through music. I never really had any formal musical training as such; I just started listening to a lot of music and studying other deejays and singers in my surroundings. Eventually I found my own voice, my own style, and these days it's just a natural thing for me."

Your mother is most famous for 'Breakfast In Bed', a song also famous in the version of UB40. Did you ever consider doing a version of it yourself?
Protoje: "(laughs) Not really, no. Don't get me wrong, I love that song, but I prefer it sung with a female voice."

For both 'The Seven Year Itch' and 'The 8 Year Affair' you collaborated with your cousin Donovan 'Don Corleon' Bennett. Was that the obvious choice from the start or did things just work out that way?
Protoje: "In the very beginning it was definitely the obvious choice, but for a while it still looked as if it was not going to happen, so I give thanks it still worked out. Don Corleon is a great producer to work with and I've greatly enjoyed our collaborations."

These two albums are linked not only in title but also musically. Is that something you will carry on in your future projects as well?
Protoje: "I always say you have to expect the unexpected; I don't like to do things in formula form. These first two albums were like two chapters of a story I wanted to tell; the story was a bit too long to tell in just one album, so instead I decided to do two. I think my next album will be very different, at least from a musical perspective. As a musician, I feel I'm constantly evolving and that's something you'll also see reflected in my albums."

Apparently Barrington Levy was a great inspiration for 'The 8 Year Affair'.
Protoje: "Barrington Levy is one of these great artists from that Junjo Lawes Volcano era, a period in reggae music I really love. I had the chance to see Barrington play live last year and seeing him do his thing on stage really brought home how much I loved that style of music and when I started working on 'The 8 Year Affair' it was completely into that whole Sly & Robbie and Ini Kamoze vibe again."

Jah9 did a combination with you for your 'The Seven Year Itch' album ('After I'm Gone') and you returned the favor with 'Legitimate'. How did that whole chemistry between you two get started?
Protoje: "Both our careers took off more or less at the same time. The first time I went on stage she was there and in the mean time we've already played together on stage for many many hours back home in Jamaica. We both have the same mentor in Gabre Selassie (radio presenter on Bess FM and sound system selector for his own Rockers Station Sound, red.) and both started out at Jamnesia (Jamnesia surf club and camp is situated 8 miles east of Kingston on the beach at Bull Bay, red.)."

You're backed by your very own Indiggnation Band. Where did you find these guys?
Protoje: "That also happened at Jamnesia, a place that in my opinion has been crucial in this whole resurgence of roots reggae in Jamaica. Most of the musicians in the Indiggnation Band knew each other from attending school at Edna Manley College. Simply put, we're all just youths interested in making music together. These days we've also got Danny Bassie (Donald Dennis, red.), former bass man for Firehouse Crew, in the band. Everything came together great!"

When did Rastafari find you and what does that philosophy represent to Protoje?
Protoje: "For me that really started after I had finished the 'The Seven Year Itch' album, because it was at that point I started delving deeper into the figure of His Imperial Majesty and once I started doing that it became an ever-growing part of my life. I would even go as far as to say it made me evolve into a different person. It's a growth process and I'm just happy to be on this journey!"