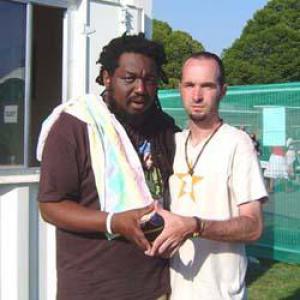 Malachi, could you tell us how you got involved in music, because I read somewhere that you didn't even start out as a singer?
Prince Malachi: "No, I started as a drummer, inspired by my father who is a jazz guitarist. He played with many of the greats; men like Ernest Ranglin and Byron Lee. He really brought me into music. So first I played a lot of big band and jazz stuff. From that I progressed to deejaying and from there to singing."

You're often compared to people like Luciano or Bushman, but what would you say are your influences as a singer?
Prince Malachi: "Naturally Bob Marley and Burning Spear, Israel Vibration and Luciano of course, because he's still my big brother. Subconsciously I think Dennis Brown was also a big influence and Bushman, Frankie Paul, the list is long! I personally never listened to a lot of Dennis Brown, but you can hear his influence is in all of us from Luciano over Bushman to me. So many influences along the way and I give thanks to every one of them for giving me strength."

I want to talk to you about your name, Malachi, one of the books in the Bible of course, but how did you come by it?
Prince Malachi: "It was really given to me by a "brethren", an elder called Kush Genesis. He was a drummer too. It's the name of the last messenger in the Old Testament, who came forward to deliver the world into righteousness, so I took on the responsibility of that name and try to do the work."

You were born and raised here in London. How did Rastafari find you here?
Prince Malachi: "To tell you the truth, Rasta is always within us. My brother is Rasta, my sister is Rasta. It's a genetic thing; some people turn and feed on something while others don't. It's a natural inborn thing. I was always positive and culture-minded and that manifested itself into Rastafari at one stage."

After your debut album 'Jah Light' you still did two great albums called 'Love Jah' and 'Watch Over We', but then there was a long silence before you returned last year with the 'Runaway Slave' album. What happened during that "quiet period"?
Prince Malachi: "At that time I departed from the whole Xterminator camp, so after that move I found that certain elements in the music industry were against me. Doors were not necessarily closed, but I encountered reluctance from people to work with me because of my past with Xterminator. I just decided to take some time off and write some songs and slowly things got back together again. Give Jah thanks for that."

We're about a week after the terrorist attacks here in London. As a Londoner, how did those attacks make you feel and how do you look at the future now?
Prince Malachi: "It's a worldwide thing, a worldwide war, but most people don't realize it yet. It's a bit like that movie "The Matrix" to a certain extent. People don't realize they are in it. We're living in a war zone and it finally touched closer to home. The fact that it were people who were born and lived here in England, shows that we really need help, more love, more teaching, more "overstanding". People need to get together and speak as one, speak to these presidents and prime ministers, these so-called leaders, and get them to sort out some of these matters that have really been going on for too long. Some of these things have been going on from before I was born, so I shouldn't really be confronted with them no more, my children shouldn't be confronted with them. They had time enough to sort them out! It's only the people that can change things. We have to hit the streets and protest in big numbers so we must be heard! Reality is that times are getting "dreader" and "dreader"."

To end this interview I'll give you some names and you just respond to me what they mean to you.
Prince Malachi: "Yeah man!"

Let's start with: Jamaica?
Prince Malachi: "Jamaica is Egypt. It's where I & I was brought on the slave ship to be sold and cut sugarcane on the plantations in order to build up the empire of the slave owners! Jamaica is just like another Egypt, a place that we have to try to leave to reach the Promised Land. Even though we love it because we've been there for so long and we claim it as our own, Jamaica is not our home. Just like England and America isn't our home."

His Imperial Majesty?
Prince Malachi: "The king, the emperor of creation, the God head! The black Christ in the flesh! Haile Selassie!"

A last one then: Prince Malachi?
Prince Malachi: "Rastafari warrior! A messenger of the Most High, coming to deliver his words to all people, no matter which color, race or creed. One love, one unity, equal rights and justice for all! Prince Malachi is just one of Jah messengers."