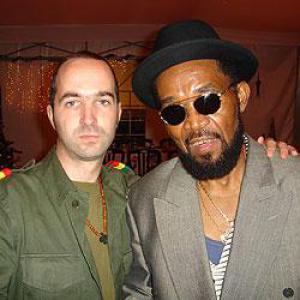 Prince Buster, first and foremost I want to say it's an incredible honour finally to be able to welcome you to Belgium. Your performance here at the Lokerse Feesten today was also your first ever in Belgium. How did that go down?
Prince Buster: "I'm happy that I came over man! I was able to entertain the people and that makes me feel very good."

To start off, I want to take you back right to the beginning of your career when you went over to Coxsone's...
Prince Buster: "(interrupts) No, Coxsone came to me! At that time Coxsone wasn't a force in music yet, Duke Reid and Tom ‘The Great' Sebastian were the main players. Coxsone was doing his best to get his place amidst the greats, but he was afraid of the bad men hanging around at Duke's. One night Coxsone was coming down Luke Lane just when I was having a problem with a youth, a big man called 'Mint Stick', who had robbed me at gambling (Buster, who was also known as 'Wild Bill' to many associates, decided to enter a game of poker. He left the others broke, then as he was about to collect his winnings together, the older men pulled knives. The most notorious, 'Mint Stick', kicked Buster's hat off his head. He had to leave without his money, red.). Coxsone saw me chasing him off with a knife and asked Count Machuki to introduce me so he could have me work for him. That's how I started."

You're more or less the inventor of ska music. In your opinion, what's the secret that makes that music still as popular today as it was back in the days?
Prince Buster: "Ska is a message. I've got an album by that title as well. Ska really portrays the voice of the people. When I say the people, I really mean the common people; their suffering and pain is what shaped the notes of that music. If you're wealthy and living somewhere up there in an ivory tower, you might find it difficult to adjust to ska, but as one of the common people you will accept it, admire and love it as expressing a part of yourself."

At which stage did the whole rude boy thing enter the music?
Prince Buster: "(ignores the question somewhat) You had bad boys and rude boys. A rude boy was an undisciplined child, someone with a mind of his own and his own set of ideas. Rude boys weren't criminals; most of them had some kind of education. Bad boys didn't care about anything like that at all. You really have to separate the two!"

In the sixties you had a huge feud going with your musical rival Derrick Morgan. How do you remember that period?
Prince Buster: "Derrick and me, we never had a physical confrontation. It was just a matter of who could make the best music. Derrick copied my style and took it to a china man to make his own records."

You're talking about Leslie Kong now?
Prince Buster: "Right, Leslie Kong (Chinese Jamaican, reggae record producer. With his brothers Fats and Cecil, he used to run a restaurant, ice cream parlour and record shop named Beverley's in Orange Street, Kingston, red.). The trouble was that Leslie Kong wasn't a friend of Derrick Morgan and neither was he a friend of mine. He and his brother Cecil grew up on Orange Street. Derrick is from Mocho, down in the country and he and I knew each other ever since we were small children. Now it didn't seem like competition to me to let Derrick record for Leslie Kong as he was using my band anyway; so when you were hearing Derrick, you were still hearing me in a way. Derrick kept me on my toes. When I recorded 'Black Head China Man', accusing him of running off to record for Kong, he retaliated with ‘Blazing Fire', to which I responded again with 'Praise Without Raise'. That verbal fight was a landmark in Jamaican musical history. Today still they are telling the youths in Jamaica to be like me and Derrick and just try to make better music than the other one instead of actually fighting. I loved this contest between me and Derrick so much, that when I went on my first tour of the United Kingdom I decided to take him along. I'm an entertainer so I saw how Derrick could be very useful on my tour because the people loved the controversy surrounding it. However, when I made to proposition to Mr. Shalit, he said no, so I ended up paying for Derrick out of my own pocket."

As a former boxer, you were also a big fan of Muhammad Ali and apparently it was after meeting him you decided to convert to Islam.
Prince Buster: "I was already a fan of Muhammad Ali from back in the early sixties. One day when I was in the UK, Mr. Shalit (Emil Shalit, founder of Blue Beat records, red.) took me to meet him at White City Stadium (originally known as The Great Stadium, it was built in White City, London, England for the 1908 Summer Olympics, red.) where he was training. Bundini Brown (Drew Bundini Brown, March 21, 1928 - September 24, 1987, was an assistant trainer and corner man of Muhammad Ali throughout the former heavyweight champion's career, red.) was there that day and when we came in he shouted: "Hey that's the guy we saw on the posters everywhere!" because there were posters advertising my concert all over the place. Now Ali always aspired to be a singer (laughs), so he came up to me to talk. He invited me to his place in Miami and there he talked to me about Islam for the first time. My mother and father were followers of Marcus Garvey, so I was already aware of some of the things he told me. You have to realise this was nothing like the Muslims from the East, this were Black Muslims (Muhammad Ali was a member of the Nation of Islam, a religious and social/political organization founded in Detroit, Michigan by Wallace Fard Muhammad in July 1930 with the self-proclaimed goal of resurrecting the spiritual, mental, social, economic condition of the black men and women of America, red.), dealing with the injustices against black people in America. I decided this way of living was very compatible with my way of thinking, so I became a Muslim and later on even a minister of Islam. At the same time, the man I had the most respect for in the world, Mister Emil Shalit of Blue Beat records, was a Jew; so he became my balancing point. He taught me a lot about psychology. I remember one time when white people weren't allowed to enter the Nation of Islam mosques. Shalit took me to see Mr. Farrakhan (Louis Farrakhan, born Louis Eugene Walcott, May 11, 1933, is the acting head of the Nation of Islam as the National Representative of Elijah Muhammad. He is also well-known as an advocate for African American interests and a critic of American society, red.) and entered the mosque without a problem. He was even received with much respect and grace. It was Ali who got me to accept Islam, yes, but Shalit showed me a lot of actual facts of life. He was my teacher and I'm glad I met him."

There's one band that paid you more tribute than any other, not only in covering your songs, but also in their band name itself. I'm talking about Madness of course. What do they represent to you?
Prince Buster: "Everything! In Jamaica, because of my militancy, my records were banned. Even 'Oh Carolina' was banned. Now when Madness appeared on the scene, it shut this whole boycott down, because suddenly my music touched the ears of millions of people! I want to say thanks to Suggs (Graham McPherson, lead singer of the band, red.) and to Madness. Even though they couldn't have guessed the extent of what they were doing, after that, Jamaica was forced to recognise and accept me!"