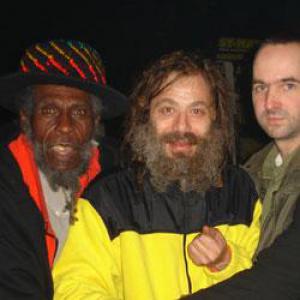 We had to drive all the way to the far eastern corner of Belgium to see Prince Alla in action, but we did not mind all that much; it was worth the drive just for the interesting conversation we had with the man, somewhere just before sunrise:

Prince Alla, you were born and raised in Greenwich Farm, a part of the Jamaican capital Kingston. What can you tell us about that area?
Prince Alla: "Well, Greenwich Farm is right next to the sea, so you have a lot of fishermen living there. It's also known as Kingston 13. When you leave Greenwich Farm and cross Spanish Town road, you're already in Trenchtown or Kingston 12; the two are next to one another. A lot of the artists that lived in Trenchtown used to come over to Greenwich Farm at night to spend some time on the beach, have some roast fish and play some guitar."

At what age did you realise you wanted to become a singer or an artist?
Prince Alla: "My grandmother used to sing in the church choir. I accompanied her a lot and enjoyed listening to the harmonies they sang. My first recording was as a young youth, I must have been fifteen or sixteen years old at the time. Joe Gibbs often watched me and my group rehearse and wanted to join the band. Unfortunately we quickly discovered the man couldn't sing! (laughs) He did have some money though, so we asked him to be our promoter and went to the Federal recording studio."

Of course Joe Gibbs went on to be one of the great producers in the island's musical history. He just passed away recently but left us with an impressive catalogue. How do you remember him?
Prince Alla: "Joe Gibbs really left his mark in the record industry. He produced a lot of top hits in his studio and when you worked with him you were always sure to be backed by a very good band, the We The People band led by Lloyd Parks. He always had a very good ear and feel for the music and that is something that is a key factor for any music producer. You have to be able to asses very quickly whether a song has potential or not. His passing truly is a great loss and I will surely miss him."

One of the first steps you took in the music business was with a group called The Leaders. Most people will probably not even have heard of it, so could you tell us a bit more about that period? Who else was in the band and what kind of music did you play in those days?
Prince Alla: "We mostly played rocksteady in those days. The other members of the trio were Roy Palmers and Milton Henry. We recorded a few songs for Joe Gibbs, but then I left to spend some time at the Bobo camp and Milton left for the States (Where he went on to record for the Wackie's label, red.); so that was kind of the end of The Leaders."

In the mid sixties, you went to live at the Boboshanti camp in Bull Bay. This was at a time when Rastafarianism was still very much an underground thing and frowned upon by most Jamaicans. How did Rastafari find you?
Prince Alla: "I like the way you asked that question: "How did Rastafari find you?", because it's not us who find God, it's He who finds us. One day I was at my gate and a Rastaman passing by started telling me about Prince Emmanuel who resided at Spanish Town road. He invited me to check the place out, so I went to listen what the man had to say. I loved what he was talking about; it was as if he was opening a whole new world to me. As you say, Rastafarians didn't get much recognition in those days, so they chased us out of Spanish Town road. After a brief stay in Trenchtown, we ended up in Bull Bay, where the Boboshanti reside up until this day. Back then the government was really opposed to Rastafarianism because they were afraid the Rasta's would come and overthrow the system. Luckily Bob Marley came along to spread the message of Rastafari worldwide with his lyrics. Today, as a result of that, you can see Rastafarians practicing medicine, working as lawyers or even having a seat in parliament. Rastafarianism is big now, educationally as well as musically."

Prince Emmanuel was the founder of the Boboshanti cult within the Rastafarian movement. Nuff artists are profiling themselves as Boboshanti today. Do you feel any affinity with them or have things changed?
Prince Alla: "No, it's a different thing now! When I was at Bobo camp, we kept the Sabbath day holy. Also whenever a Boboshanti would disrespect someone, be it another Boboshanti or a stranger, he could no longer stay at the camp. Prince Emmanuel taught us it was not up to us to pass judgement. It's only up to God to pass judgement. We as humans must have mercy, because all of us do something wrong here or there. But now you have these artists who went to spend just a little time at Bobo camp. They learned just a few things about Boboshanti and then left again to focus on their music careers, profiling themselves violently and touting guns and all that. We, the original Boboshanti, never used any guns; we used the word and preached love! We never ran around shouting burn this and burn that. Boboshanti don't deal with that! Those artists really lack the spiritual foundation we had. They walk around cursing people and all that, while we never even used bad words. They're not the real thing; all they do is imitate. Right now Boboshanti is divided up into different segregations. Capleton came to Bobo camp, left again and called his own thing David House; Sizzla came there, learned something and then established his Judgement Yard... It's become a joke thing man! They are definitely doing the wrong thing! I'm not even afraid to say that! I'm a Rastaman, seen. Less judgement and more love, that's what they need. They can't even say they love Selassie I, because Selassie I said technology was the key, the way forward, and all they do is talk against it, burn the internet and all that."

You were one of the Rastafarians who went to greet His Imperial Majesty when he visited Jamaica in 1966.
Prince Alla: "At that time I wasn't at Bobo camp yet, but as a little youth I had a vision one night. I saw a little short man standing up till his knees in the clearest water. He waved his hands and suddenly the water was full of fish. The next day I went to a Rastaman and told him about my dream. When he heard my story, his eyes lit up and he said: "That was Selassie I you saw there!" Now when I heard His Imperial Majesty was coming to Jamaica, I said to myself: "I have to go down there and check this man out for myself!" I was really still expecting to see a big man, but when he passed I just saw a little man sitting there. He waved to me as he passed - I was sitting alone on a hill - and at that moment I felt a power running through me, lifting me as if I could fly. On that moment Rastafari found me!"

You use a lot of Bible references in your songs...
Prince Alla: "Yes, because when I was at Bobo camp, every morning we had service and used to read the Bible and chant psalms. On the Sabbath day we even spent the whole day reading the Bible. On that day not even the fire was lit; from six o'clock on Friday until six o'clock on Saturday, we just stayed in and did our readings and reasonings. Now when I left and started recording for Freedom Sounds and Tappa Zukie, I still drew on those texts from the Bible for my songs; songs like 'Daniel From The Lion's Den', 'Man From Buzzrock', 'Stone' and so on."

Do you think today's youths still get those references?
Prince Alla: "Yes, I think so. Everywhere I perform, it's mostly youths who come to my shows and they love my music, so there must be something strong in those songs."

One of your biggest tunes is 'Stone', a track that was originally mixed by King Tubby; a fact you are particularly proud of I believe.
Prince Alla: "Yes! King Tubby only used to mix for himself; he never mixed songs produced by other people. When I went there to record the song I think Scientist was at the controls and Tubby was busy in his office fixing an amp. When he heard the tune, he stepped out and said: "That tune deh nice!" I looked at him and replied: "Tubby if you like this tune, you haffi mix it fi we!" At first he was a little reluctant, but after a while he agreed."

In the eighties you disappeared from the music scene for a while. What happened in that period?
Prince Alla: "Well, back then most producers were starting to ask me to do slackness and gun tunes, just because these tunes made more money. I didn't want to do that, so I just stopped recording and returned to fishing. I prefer fishing and just getting some food to eat to recording slackness and making money. That's just how it is!"

Blood & Fire then refreshed your career in the mid-nineties when they decided to re-release those massive tunes you recorded in the seventies.
Prince Alla: "Yeah man! Blood & Fire are like family to me. They were the first who finally saw to it that I got some money from those tunes. Up till then, from my biggest tunes, songs like 'Stone', 'Bucket Bottom' or 'Lot's Wife', I never saw any money. Blood & Fire put food on my table; nuff respect to them!"

For a Rastaman you have kind of a peculiar stage name. How did you come by it?
Prince Alla: "As a youth I was a big fan of Cassius Clay. As you know at one stage he converted to Islam and changed his name to Muhammad Ali. When my friends heard that, they wanted to make fun of me and told me: "See, your boxer now him turn to Islam, so from now on we're gonna call you Prince Alla!" and the name stuck. I'm glad it's not "Allah" like in Islam though, it's just "Alla" cause I'm a Rastaman still seen! (laughs)"