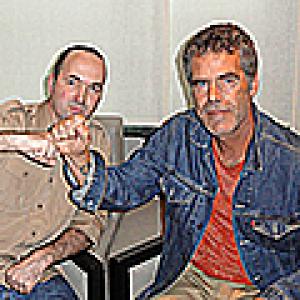 Pékah, you didn't start out as a singer. At which point did you discover the power of your voice?
Pierpoljak: "At the very beginning of my career I still played bass in a punk band. After I left that band, I discovered reggae music whilst living in London. I quickly fell in love with the genre and everything started from there."

What did reggae offer you that you weren't able to find in punk?
Pierpoljak: "I'm not sure… To tell you the truth, I never looked for reggae, it found me. Back then I lived in Stockwell, close to Brixton, London's Caribbean neighborhood. There reggae sounded on every corner. I also listened to ska and rocksteady, the favorite sounds of the skinheads."

Reggae music also steered you towards Jamaica, when at one point Clive Hunt took you over there. How did the two of you meet?
Pierpoljak: "At one point Clive came to France to cash in. (laughs) He was due a reasonable sum for a song he produced for Bernard Lavilliers and Jimmy Cliff ('Melody Tempo Harmony', Barclay, 1995, red.). Back then Bernard was signed with Barclay and since I was also signed there and the label didn't really know how to market me, they asked Clive's opinion. They made him listen to 'La Musique', a song for which I'd used a sample of The Paragons' 'Only A Smile' and Clive was immediately enthused. At that time I was rehearsing elsewhere in Paris and that's where he looked me up. We started working together and that collaboration eventually yielded no less than 4 albums."

How big would you say his influence on your career has been?
Pierpoljak: "(in Jamaican patois) Clive Hunt a mi fatha man! I can't express it any other way."

What did your trip to Jamaica leave you with?
Pierpoljak: "Well, seeing that I lived in the French Antilles for a while, Jamaica reminded me of those islands somewhat. I immediately embraced local lifestyle. Of course Jamaica isn't just sun, see and sand, the island also has its brutal, violent side, but that's all part of its identity."

Way before you took to the stage as Pierpoljak, you were known as Pierrot le Fou ("Crazy Peter") for a while.
Pierpoljak: "Well, let me be honest… As a youth I was affiliated with a local gang for a while. That period of my life really only lasted two years, but that's when I "earned" the nickname Pierrot le Fou; a name I've always disliked, let that be clear!"

How did you come by your stage name Pierpoljak then?
Pierpoljak: "It was my brother who came up with that name. At that time I was still active in the sound system scene where I was known as Peter Pan… Not much of a stage name, I know! (laughs) One day my brother came up with Pierpoljak and since I kind of liked the way that sounded, I decided to stick with it."

'General Indigo', the title of your new album, is another one of your nicknames; this time one you got in Jamaica.
Pierpoljak: "True! One day I was accompanying one of my friends on a quick shopping trip in downtown Kingston. Waiting for him on the parking lot of a mall, I had just lighted a spliff when one of the security guards at the complex saw me and immediately started yelling. Of course I replied him in fluent patois and that must have caught him by surprise, because he hesitated and asked me if I was a white Jamaican. When I told him I was French, he started laughing. I added I was a singer and that my name was Pierpoljak. He then replied: "No, no, with your piercing blue eyes, from now on your name is General Indigo!". Jamaicans have a tradition of giving each other nicknames describing character flaws or physical disabilities. Once you get a name like that, you better believe it will stick!"

I read somewhere that 'General Indigo' took you quite a long time to complete.
Pierpoljak: "Well, it was just a matter of finances really… Back when I recorded 'A La Campagne/En Jamaica' and 'Kingston Karma' at Tuff Gong, I was still signed with Barclay, but I released 'General Indigo' on my own Garvey Drive label, so I had to finance it myself. I managed to solve that problem at least in part by calling on a number of befriended musicians, but in truth, I'm really happy with how it all turned out in the end."

Did you have to make a lot of sacrifices or did that independence also come with its perks?
Pierpoljak: "Don't get me wrong, I still have fond memories of my time with Barclay, but doing things yourself opens other possibilities. Creating the Garvey Drive label also gave us the opportunity to offer young upcoming artists a break."

What does the name of the label refer to?
Pierpoljak: "It's the name of the street in Kingston where Tuff Gong Studios are located, the former Federal Studios; not the Bob Marley Museum, because that's located on Hope Road."

'General Indigo' contains a number of autobiographical songs, with 'Papa Du Weekend', in which you describe your experiences as a divorced father, being perhaps the most poignant example.
Pierpoljak: "In that song I describe my personal situation and give my opinion on the matter! (laughs) It also serves as a message of solidarity with other fathers out there who are in the same boat."

Then there's the ganja tune 'Pour Moi C'est Déjà Légalisé'. From all your experiences with drugs, is marihuana still the one that you only had positive experiences with?
Pierpoljak: "Well, I still smoke so… I was almost going to say: "…unfortunately!", because let's be honest, smoking weed has its drawbacks as well. I always said I'd do a song about it one day. That being said, I wanted it to be a ganja tune that was a statement as well. Everyone who's been smoking weed for a long time already should be honest enough to admit there are negative sides to blowing as well; it's a drug that can render an individual quite lethargic."

If I were to describe 'General Indigo' as being a melancholic album, would you agree?
Pierpoljak: "Oh yes, absolutely, but I've got somewhat of a melancholic personality, so to me it's not that surprising that that fact also shines through in my music. I think you can find that melancholic or even sad side in all of my albums. That's just the way I am I guess. (laughs)"

In conclusion, would you say Rastafarianism has played a role in your music or your life in general?
Pierpoljak: "In my music for sure, because reggae music is undeniably linked to Rastafarianism. On a personal level, I'm not bothered with religion. That being said, the Rastafarian philosophy, or livity so you want, really changed my life. When I arrived in Martinique in the French Antilles, I was still a delinquent - I burgled hotel rooms - and it were the local Rastafarians who showed me there was also another path."