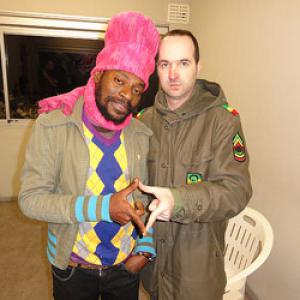 Perfect, the first thing we have to talk about is your album debut that has just been released.
Perfect: "Yeah! The album is called 'Giddimani' and thus far a lot of people are telling me they love it. It's a very interesting 18 track album with songs to free the people's minds and to uplift you know. It's an album that you can easily play for your children or your grandma too. There aren't any songs on there telling you about killing or violence or something, just songs telling you what is happening in everyday life. So I think it's really a good album and I want to give thanks to DHF Records from Austria and to Chalice Palace Music who made it all possible."

Tell me a bit more about that title. Where does it come from and what does it mean?
Perfect: "The word "Giddimani" comes from two words "Armageddon" or "Gideon" and "morning". I just took the syllables from both words and made them one word: "Giddimani". It's really an outward cry to the people, a cry to have the weaker ones among us find the strength within themselves, because judgement day is now. The time of Babylon is at hand! There are wars going on everywhere, people hating each other because of religion, creed or colour. But you can create your own judgement in the way that you live and treat other people. "Giddimani" is a cry to the people to tell them to look within themselves and open their eyes. Rastafari!"

Isn't the name 'Perfect' a heavy one to bear? It comes with a lot of connotations.
Perfect: "Well, a lot of people are sceptical about the name 'Perfect', but it really helps to motivate me. Nobody is perfect except for Haile Selassie I, the perfect one. Whenever I'm about to go on stage and I hear the Mc say the name 'Perfect', I know I have to go out there and give it my best shot. Creation is perfect and I'm a part of creation. I think I was made perfect; I have two hands, two eyes and two feet and so on. The name really helps to bring out the best in me. Rastafari!"

Is your number one tune, 'Handcart Bwoy' an autobiographical song? Were you the handcart boy in the song?
Perfect: "Yeah man! I used to push a handcart in Brownstown, that's a town in St. Ann because that's where I'm from. I'm from the country, not from Kingston. A lot of vendors come there with their fruits and vegetables. There's a big market and I used to push a handcart with vegetables and sell them to the people."

At which point did you start to manifest yourself as a singer then?
Perfect: "I used to sing even before my handcart days. After pushing the handcart, I used to go and join up with my friends. One of them had a little sound system and there I always used to practice. Ever since I left high school, music has always been my career really."

Another song, that I know to be autobiographical, is 'Amerimaka', telling the story of your experiences being refused entry into the United States. How did that story go in reality?
Perfect: "Well, when I had my first big hit, which was 'Handcart Bwoy', in 2004, some people in the United States wanted to do a tour with me. Now when I went to the United States embassy in Jamaica, they turned me down and refused to give me a visa. They claimed I wasn't qualified enough to go to their country, but I never wanted to go there to live. I had waited all my life to do this, this is my career, this is how I survive and now that I had the chance to spread the message of Rastafari to the people, they turned me down. I just went home and wrote a song about it all. In the song I clearly say: "Nah live Amerimaka!" because I don't want to go there to live, I just want to go there to do my work and come back home! Happily enough I must say I got a lawyer who sorted it out and since March of this year I've had my US visa and come September I will be touring the US with I-Wayne. When I went back to the embassy, they said: "We saw your video!" because I did a video to accompany the song, and I got worried they weren't going to give it to me again, but they went like: "It was funny man!" so everything is cool now."

How and at what stage in your life did Rastafari come into your life?
Perfect: "Rastafari was always a part of me. It was an inborn concept, but it really started to manifest after I had left high school. My mother wanted me to become a doctor or a teacher or even a lawyer, but that wasn't my aim or idea in life. I wasn't going to school anymore, so sometimes I had some problems with my mother, arguments because I loved reggae music so much. Sometimes she threw me out of the house and then I used to go and stay with this old Rastaman who's known as King Samuel, and he taught me the works of Rastafari: how to live, how to eat, how to treat people, how to be true to yourself and to others, how to think positive, and so on. So I grew up with that message, learning more and more about it and eventually I started going to the Nyahbinghi, Boboshanti and Twelve Tribes. Rastafari knows!"

To end this interview, I just want to give you some names and you can just respond by telling us what they mean to you.
Perfect: "Yeah man."

Let's start with your home country: Jamaica?
Perfect: "In Jamaica we say this means ‘The land of wood and water', but to Perfect Jamaica means Jah-make-ya (meaning "Jah created you", red.)."

Africa?
Perfect: "Africa? I-free-ca! Liberty, free speech, free movement, no borders or barriers, no visas, but freedom for everyone."

And to end with: the head creator, His Imperial Majesty?
Perfect: "Emperor Haile Selassie I is life. He is the life giver, protector of all human faith. He puts a smile on our faces. Every morning he makes the sun shine and the rivers flow. He makes the good marihuana grow. Haile Selassie is life!"

Respect! I want to thank you for this interview.
Perfect: "Blessed love! Rastafari! Give thanks for having me, much respect. Giddimani, hit them like a tsunami!"