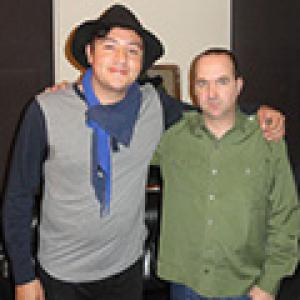 Sergio, the whole Orkesta Mendoza story actually started with you participating in the Great Cover Up concert series.
Sergio Mendoza (vocals, piano, guitar): "Yeah, it's actually a benefit for the Artists and Musicians Healthcare Alliance in Tucson and they ask participants to play a twenty minute set consisting of covers of any band you want. We decided to go for the repertoire of Perez Prado, who was a Cuban bandleader from the nineteen forties and fifties and a mambo legend. Previously we'd also done Buddy Holly, Paul McCartney & Wings. It's not just playing their music though, during those twenty minutes you try and become whoever you picked, impersonating them to the best of your abilities and that goes as far as dressing up like the artist or band you're impersonating. When we did our Perez Prado set, some local concert promoters were present and Joey Burns from Calexico saw us play as well and he invited us to open some shows for them."

You haven't just stuck to opening for Calexico though, as over the years you've become an integral part of the band.
Sergio Mendoza: "I've been playing with Calexico for about nine years now, playing piano, accordion and vihuela - the little Mexican guitar - and started touring with them when they released the 'Algiers' album back in 2012. For their 'Edge Of The Sun' album (City Slang, 2015, red.), I got to work in the studio with John and Joey and for that album I'm mentioned as a co-producer. I got a little more involved in suggesting collaborations, introducing them to musicians from Mexico and South-America."

Sound-wise there's quite a difference between 'Mambo Mexicano!', Orkesta Mendoza's debut album, and your new album '¡Vamos A Guarachar!'. There was a four year time gap between the two albums; was that because of your involvement with Calexico or because you wanted to develop the sound of Orkesta Menoza further?
Sergio Mendoza: "The first album, 'Mambo Mexicano!' was released back in 2012, and after its release I started touring with a band from Denver called DeVotchKa, immediately followed by the tour I did with Calexico. Apart from that I've been doing a lot of production work passed my way by Camilo Lara, a friend of mine from Mexico-City who's a member of Mexican Institute of Sound. So in short, I was keeping myself pretty busy! (laughs)"

As I already mentioned the sound of Orkesta Mendoza has evolved quite a bit. In which direction would you like to steer the band in the future?
Sergio Mendoza: "Well, the work I've done with all these other bands has had a profound influence. For Mexican Institute of Sound, which is basically an electronic music project, Camilo samples a lot of old cumbia and mambo records and what we do is almost the opposite: playing mambo and cumbia with a big band incorporating a little bit of electronics. The electronic part has come a lot more to the forefront on the new album and it's something I'd like to explore even further in the future."

For Orkesta Mendoza you drew inspiration from artists like Ramon Ayala and Chico Che.
Sergio Mendez: "Growing up in Nogales, Mexico, that was what I was listening to when I was little. Ramon Ayala is a really prolific accordion player and Chico Che is my absolute cumbia idol. There are a lot of different styles of cumbia: there's Colombian cumbia, which is perhaps the most well-known, then there's Peruvian cumbia or chicha, but I've always been more interested in the Mexican variant and Chico Che is undoubtedly one of the best exponents of that genre. Even though I've played many other genres of music, that's still the music I gravitate most towards as it was the soundtrack to my childhood."

What would you say the role of cumbia is in Mexican society? I'm asking because when I travelled Mexico it was the music that was always playing on the local busses.
Sergio Mendez: "It used to be poor people music, that you'd here in the barrios, the local neighborhoods - as you just stated, for people who took the bus or the music that taxi drivers seemed to love - but what bands like Mexican Institute of Sound and Chicha Libre have done and are still doing has caused a bit of a shift, and now the genre is reaching totally different audiences as is used to. In Mexico it's now almost the hippest thing in town."

You grew up in what's known as the frontera region, the border region between Mexico and the United States. While geographically and culturally both sides of the border are quite similar, politically they couldn't be more divided. Crossing the border is almost like going from one civilization to another. How did you experience that partition?
Sergio Mendoza: "All these things you just mentioned really help shape who you are as a person. In 2010 the state of Arizona issued the Arizona Senate Bill 1070, which basically allowed the police to racially profile anyone who looked Latino and pull them over to ask them for their papers. Back then Zack de la Rocha from Rage Against The Machine started an initiative called Sound Strike, calling on bands to boycott Arizona until the bill was lifted. He quickly got the support of artists and bands like Los Lobos, Lila Downs, Ozomatli and Los Tigres del Norte. On the other hand you had Manu Chao and Mexican Institute of Sound who came to play in Phoenix to confront the issue and show his support to the people faced with the daily consequences of this bill. A number of local bands including Calexico and Orkesta Mendoza started an artist alliance called Viva Arizona, trying to convince other bands not to boycott Arizona. The only effect the boycott was having wash punishing the people who'd normally come to see these bands play. All these events shaped our music as well. I think you can't escape that. '¡Vamos A Guarachar!' also contains a couple of songs that are quite political."

What exactly is the difference between a normal Orkesta Mendoza show and the XL version?
Sergio Mendoza: "Well, basically we tour as a seven or eight piece band and what we do is when people request on of our XL shows, we invite some local musicians to join us on stage. That way touring expenses are still limited, but we can still achieve the vibe of one of our hometown shows."