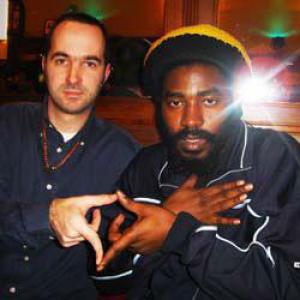 'Man Free', Omar Perry's debut album, proves something we already knew: Belgium has world class reggae talent. It's time for an interview with the man who came from Jamaica through London and Gambia and ended up in Brussels, of all places.

Omar, blessings. First and foremost congratulations on the release of your debut album 'Man Free'. How much of an uphill struggle has it been to get that album out there?
Omar Perry: "There really wasn't any struggle. Most of the tracks on the album are songs that I've been doing live for the last few years - I guess a lot of people will recognise them - so they were already there. It just took time to get the album together. I had to get into the studio to build the riddims, then to voice the tracks, mix them and so on. It was just a time thing."

You recorded your first single, 'Rasta Meditation', with Adrian Sherwood (Adrian Sherwood, born 1958 in London, is an English record producer best known for his work with dub music as well as for remixing a number of popular acts such as Coldcut, Depeche Mode, Primal Scream, Pop Will Eat Itself, Sinéad O'Connor, and Skinny Puppy. He is co-founder of Carib Gems and Pressure Sounds, and founder of Hitrun Records as well as Green Tea Records and Soundboy Records. His most well-known label is On-U Sound Records, red.), but for the album you teamed up with Steppa (Guillaume 'Steppa' Briard, red.), a French producer that most reggae lovers might know better as a musician in the Homegrown band. How did you guys get together?
Omar Perry: "It all kind of started in 2003, when I did a little tour alongside Horace Andy. Steppa saw me on stage and was genuinely surprised to learn I didn't have an album on the streets yet. He already worked as a producer on Horace Andy's latest album ('Livin' It Up', red.) and suggested to produce mine as well. That process took around two years to complete."

Two years is a lot of time and effort to invest in a project. Taking that into account how badly the music business is doing these days, is it still worthwhile to release an album?
Omar Perry: "Yeah, I think so. Remember this is my debut album, so I think there will be a certain buzz going around. For people who already have several albums out there it might be different. Just downloading tracks isn't enough; an album provides you with something you can treasure, a collector's item so to speak."
Content-wise, the album is very diverse with tracks ranging from calypso ('Cocoanut Woman', red.), over ska ('Ska-Ta-Fright', red.) to reggae and dancehall. Was that your intent from the start?
Omar Perry: "It was like a jigsaw puzzle in a way, where everything gradually falls into place. The ska and calypso tracks made the album stand out. It was only afterwards that I realised I had compiled a very diverse album, but that's only a good thing because it means it will appeal to a broad audience."

What about the title, 'Man Free'? What does it stand for?
Omar Perry: "We had to think of a title that would appeal to as much people as possible. If I had chosen to call it 'Rasta Meditation' instead, I would have mainly attracted a roots audience, so we decided on 'Man Free'."

There's only one cover on the album, the Harry Belafonte song 'Cocoanut Woman'. What's your connection with that song?
Omar Perry: "That track has been a special and funny song for me ever since I was a small boy in Jamaica. The term "coconut woman" refers to the big-bottomed Jamaican women in their old-time traditional clothes, carrying stuff on their heads and selling it on the streets. When I started to perform this song on stage, I realised it really appealed to the elder part of my audience. It's also those people who generally know where reggae music started and where it came from, so you have to respect that."

Being the son of the legendary Lee 'Scratch' Perry, you grew up in and around the Black Ark studios, in what we can now call "privileged surroundings". What do you remember about those days?
Omar Perry: "Well, it wasn't a very long period really; it was kind of finished already by the time I reached my teens. Some of the few things I can remember are when people like Max Romeo and Junior Byles came to voice in the studio and me and my other brothers and sisters doing some recordings together there (As the Upsetters Juniors, red.). I also remember the time Bob Marley came over and took me and my brothers and sisters together with Ziggy and Stephen to the beach. Small little memories like that you know."

At one stage you went to live in Gambia for a while. As a Rastafarian fulfilling that dream of returning to Africa, was it everything you hoped for?
Omar Perry: "Ever since I was a child, I considered myself an African. A lot of people want to go to the United States or the United Kingdom to live the nice life, but my dream was to go to Africa. At the point when I left Jamaica, I wasn't really doing much in music anymore, but Africa really rejuvenated those feelings again. I started doing a little deejaying again and promoted reggae music over there. Going to Africa really helped me spiritually and it instilled a great fire in me that is still burning and keeping me going today. I'm really thankful for making that choice when I made it!"

Eventually you ended up in Belgium. You even have a daughter here now. Does that make things somewhat more permanent?
Omar Perry: "In every man's life there comes a time when you have to stop travelling and settle down a bit and nothing can make you do that more than having a child. Having said that, I have to add that I'm still on that same journey that I started when I left Jamaica and it led me to a point where I've got an album now and can tour the world to promote it. The journey is still going on; it's not over at all!"

Omar, thanks for doing this!
Omar Perry: "Give thanks! We all need to understand what the purpose of reggae music is. I would like to tell the people of Belgium that it's high time they start to realise that they have to join hands to support the upcoming reggae artists in their country. I'm convinced everybody would like to see a local reggae artist making it big someday. Right now you've got artists coming from Germany, Holland and Italy - guys like Gentleman and Alborosie - all getting a foot in the door. Here in Belgium people are still questioning things and that's not what I expected from people who've been listening and enjoying reggae music for so long. Reggae is making big headway all over the world right now, but it yet has to do so here in Belgium, so the Belgian people really have to ask themselves what they are waiting for. Television, radio, the newspapers, everybody needs to get involved in promoting local talent! That's my motto: "Do it locally!""