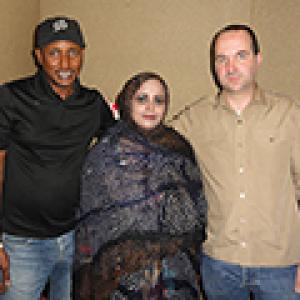 Noura, compared to music from neighboring countries like Mali, Senegal or even Burkina Faso, Mauritanian Music isn't that well known. Why do you think that is?
Noura Mint Seymali: "Mauritania is a vast country (1030000 square kilometers, red.), but only counts 3 million inhabitants, so there aren't really that many of us. The main reason I've attempted to modernize Mauritanian music is because I wanted to try and popularize our music culture outside of Mauritania as well."

Are there other artists in Mauritania walking a similar path to yours or are you really playing a pioneering role?
Noura Mint Seymali: "There are a few others, but the majority of musicians in Mauritania are still traditional griots or, as we call them, iggawen. In my family, which is also a traditional griot lineage, it was my father who first started modernizing Mauritanian music. He left the country to study music in Iraq and upon his return brought a number of modern instruments with him. With Jeiche, who's also my husband, I started out doing a traditional repertoire. We mainly played at weddings and other festivities, but after a while we felt we wanted to experiment more."
Jeiche Ould Chighaly (guitar, tidinit): "With our music we try to represent the four main ethnic groups in Mauritania: the Fula, the Moors, the Wolof and the Soninke."

Noura, you play an instrument in shape resembling the Malian kamele ngoni. I've learned it's a uniquely Mauritanian instrument though.
Noura Mint Seymali: "It's called an ardine and is only played by women…"
Jeiche Ould Chighaly: "The big difference with the kamala ngoni which is only played by men."
Noura Mint Seymali: "The ardine is uniquely Mauritanian, but we also use another instrument called the tidinit, a lute that's also used in Senegal where it's known as a xalam, and in Mali where they call it ngoni. There's no special reason why it's only the Mauritanian women who play the ardine, it's just a cultural tradition that's been around for centuries already."

Why did you opt to call your first international album 'Tzenni'?
Noura Mint Seymali: "Tzenni is a word that holds different meanings; it's the name of a traditional Mauritanian dance, but it's also used to indicate something that turns or spins."
Jeiche Ould Chighaly: "We liked it, because it's a very poetic term."

Before 'Tzenni' there was the 'Azawan' EP. What does "azawan" mean exactly?
Noura Mint Seymali: "It's a term used to indicate a traditional Mauritanian orchestra made up of an ardine and a tidinit player, possibly supplemented with other instruments."

Apart from traditional Mauritanian music, what would you say are your musical influences?
Noura Mint Seymali: "In all honesty, I will listen to just about anything, no matter where it's from…"
Jeiche Ould Chighaly: "I have a preference for guitar driven music like that of Dire Straits or Jimi Hendrix. That's also one of the reasons why we introduced a more western sounding guitar sound in our music."

How did your relationship with Glitterbeat Records come about?
Matthew Tinari (drums, production): "We first met them when we were billed to play at the same festival as Samba Touré. I handed them a copy of the EP and they must have liked what they heard, because here we are!"

'Emin Emineïna Chou Weynë', the closing track on 'Tzenni' is dedicated to your grandmother.
Noura Mint Seymali: "Yes, my grandmother was a grand-dame of Mauritanian music and 'Emin Emineïna Chou Weynë' was one of her songs. She was the mother of my father and it's been said her voice and mine sound somewhat similar."
Jeiche Ould Chighaly: "Mounina already enjoyed fame before the independence of Mauritania and she was close to Moktar Ould Daddah, the first president of Mauritania. She taught Noura a lot!"

Now you've also established an international career, do you still find the time to perform in the traditional circuit like you used to?
Noura Mint Seymali: "Ever since I've started touring internationally, I honestly can't find the time anymore. From time to time I still get requests, but I can't always oblige."
Jeiche Ould Chighaly: "There are people in Mauritania who aren't pleased with what we're doing and would prefer Mauritanian music stay traditional. That being said, there are plenty youths that listen to hip-hop, reggae and other western genres as well."

Your new album is called 'Arbina'.
Noura Mint Seymali: "It means "our God" and in the eponymous title track I'm addressing the issue of breast cancer. I wanted to encourage Mauritanian women to have themselves screened regularly. You should be aware that for many people in Mauritania, and the rest of West-Africa for that matter, music is just about the only source of information. So it's important to get these kinds of messages out there. Moreover, my mother fell victim to the disease and passed away from the consequences, so I think I know what I'm on about. In the song I'm asking God to help us to battle cancer."
Matthew Tinari: "We recorded the album in the same New York studio (Studio G, red.) we already used for the previous album as well, so the technical crew was virtually identical . The main difference is that 'Tzenni' was still partly recorded in Nouakchott."

In closing… With the vast range of music on offer today, why should people go in search of Mauritanian music?
Noura Mint Seymali: "Because it would mean the realization of a lifelong dream of mine! However, I would already be very happy if I succeeded in making Mauritanian music better know then it is today. And it's not just about the music either, because a lot of people aren't even too familiar with Mauritania itself. That's why every time I get on stage somewhere, I feel like a proud ambassador of my country and it's also the reason behind me putting the Mauritanian flag on my ardine! (laughs)"