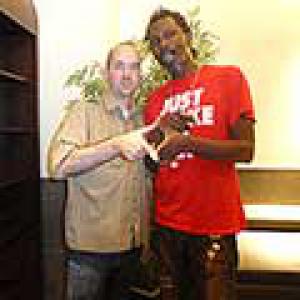 Noel, as the son of the late great Alton Ellis basically you were surrounded by music from birth and you already recorded your very first song at the tender age of eleven.
Noel Ellis: "Yeah, that was at Channel One; at the time they had just built the studio and were still testing the equipment. They needed somebody to voice a song so they could see if everything was working as it should so I asked my father if I could do it and he agreed. The song was called 'It Has Been A Long Time', but for some reason it was never released."

Was it already at that age that you knew you wanted to pursue a career in music or did that come later in life?
Noel Ellis: "The first who took me to perform somewhere was my aunt Hortence Ellis. She took me to a club on Maxfield Avenue called Kittymat. I performed some of my dance moves and got paid a modest sum in return. That's where my career on stage really started."

Your dad moved to Canada at one point, where you joined him after a while and became a member of a dance group of some sorts.
Noel Ellis: "That group was called The Disciples; basically we were a bunch of young guys who all loved to dance and we would rehearse and go on the City TV Boogie Dance Show program, which was a television show that was shot in Toronto and broadcasted weekly in Canada. For me it was just a continuation of what I already was doing back home in Jamaica. I wasn't really into reggae at that time, but instead was listening to the funk and disco that was coming out of the US."

I believe it was Anthony Hibbert aka Base who eventually introduced you to Jerry Brown. How did you guys meet?
Noel Ellis: "Base was a guy I met in Toronto. He was a member of a rival dance group called Rapid Fire and also played in a local reggae band called Innocent Youths, who used to record at Jerry Brown's studio. Jerry was the guy who owned Summer Records, the same place Jackie Mittoo also used to hang out at whenever he was in Toronto. Base introduced me to Jerry and that's how things got started."

Your relationship with Jerry eventually also led to the release of your 'Noel Ellis' debut album (Summer Records, 1983, red.). In time it's become a cult classic in reggae music, but back in the day the release didn't cause that much of a stir I believe?
Noel Ellis: "(laughs) No one knew about it, man! Even in Toronto nobody had heard of the album. I think we sold some copies in the UK, but overall it didn't do too much."

I know you no longer live in Canada, but where are you based these days?
Noel Ellis: "I lived in Canada for quite some time, but moved back to Jamaica a while back now. I'm involved in the comedy circuit now, in what's known as the Ity & Fancy Cat Show, the biggest comedy show on Jamaican television. I'm not a standup comedian or anything, but am mostly known for doing parodies and singing funny songs. In Jamaica, if you say Noel Ellis, nobody will know who you're talking about, but everybody will know Rozah Rose, which is my stage name as a comedian."

How do you remember Alton? What kind of a father was he?
Noel Ellis: "From as far back as I can remember he was working on his music, with musicians coming and going all the time. Nuff times he would also take me along to the studio to watch or record a tune of my own."

Your brother Christopher tries to keep Alton's name alive by performing his songs. Is that also something you do?
Noel Ellis: "Only when I'm requested to do so; I mostly tend to stick to my own material. When I perform in Jamaica I get asked to do that often and I've also got an album with acoustic versions of my father's songs in the works."

Was 'Noel Ellis' the only albums you ever released? Are you working on any new stuff?
Noel Ellis: "Well I did two albums for Love Life, but they didn't really make it out of Canada. Apart from that I released a 7inch called 'No Apology' with Christopher doing his thing on the A-side (All Tone, 2005, red.) and you'll also see a brand new album on a French label called Iroko Records real soon ('Zion', released in Oktober of 2015, red.)!"