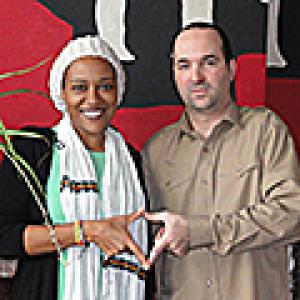 Nish, you were born and raised in Rotterdam but are of Cape Verde descent. Even though Cabo Verde used to be a Portuguese colony, there's also quite a large Cape Verdean community in The Netherlands. Any idea how and why all these Cape Verdeans ended up there?
Nish Wadada: "The Cape Verdean community in The Netherlands is mainly concentrated in Rotterdam, something which probably has to do with the fact it's a port city. Cabo Verde is made up of ten islands, with a large part of the population working either in the fishing or the shipping industry. Rotterdam sustained heavy bomb damage during the Second World War and in the nineteen sixties and seventies skilled labor to help in the reconstruction of the city was very sought after."

Being of Cape Verdean descent, your first steps in music were not in reggae but in genres like zouk and kizomba. How do you look back on that part of your career?
Nish Wadada: "Above all else it was a learning period. I started out doing backing vocals for Grace Evora, one of Cape Verde's most popular singers. Cape Verdean zouk was and still is mainly produced in Rotterdam, resulting in many Cape Verdean artists residing in that city. Back then I mainly did studio sessions and they proved an important learning trajectory. After a while I started missing substance in the music though and that's how I eventually ended up doing reggae instead."

Did that happen gradually over time or was there a defining moment where you decided you wanted or needed something else?
Nish Wadada: "It was a natural progression of things. In 2004 Rotterdam reggae band Delidel Touch asked to become their backing vocalist and the experience of working with them was a real eye-opener. I started to read up on the history of the reggae genre and the Rastafarian movement and doing that also inspired me to go in search of my own Cape Verdean roots. When I started noticing reggae and Rastafari were becoming my livity rather than my career, I decided to abandon zouk and kizomba altogether."

A point of criticism of made when talking about the Rastafarian movement is the fact it's still largely male dominated. As a young Rastafarian woman, what's your stance on that?
Nish Wadada: "Well, for starters I'm a firm believer in the equality of the sexes, but that being said, the Rastafarian movement is still in its infancy and there's still evolutionary potential. It's definitely true that in reggae music women have always been underrepresented, but that fact never stopped me from doing my thing. I see it as a challenge to try and alter the status quo. In reggae music alpha and omega are often referred to, so I think it's only logical we also try to apply that balanced vision in daily life."

In reggae, who are your musical examples?
Nish Wadada: "I'm still exploring and discovering the reggae scene, so forgive me if my knowledge is still rather limited. I mostly listen to conscious roots music: female artists like Dezaree, Mo'Kalamity or Aisha and bands like Twinkle Brothers, Misty In Roots and off course Bob Marley & The Wailers. But as I just stated, I've got loads to discover still!"

Musically speaking the 'Queens & Kings' EP and your debut album 'Jah Calling' are quite different.
Nish Wadada: "The thing is that it took several years before 'Jah Calling' was finally completed and in that time I was also approached by Delmighty Sounds in Portugal, who sent me several of their riddims to work with. The past few months I've been on tour almost non-stop, doing sound system show all over Europe. But to promote 'Jah Calling', I'll be touring with an actual band which will provide a totally different experience."

Who did you collaborate with for 'Jah Calling'?
Nish Wadada: "It was more or less the same team led by Anne Riou, previously also already responsible for 'Warriors Of Light' and 'Deeper Revolution', Mo'Kalamity's first two albums. The band's entirely made up of musicians with a conservatory education, who don't limit themselves to just reggae, but are active in a range of other musical projects."

I've never seen your name among the contestants of one of the many reggae talent contests out there. That's not the kind of thing that appeals to you?
Nish Wadada: "Thing is I wanted to focus all of my energy in completing the album project first. Also, I've already performed at many of the well-known festival locations in Europe. In part that's probably beginners luck, but apart from that, I truly believe there's a demand for female reggae vocalists as there still aren't that many out there. All in all I'm not fully convinced of the need to enter one of these contests yet, but it might be an interesting challenge."

What's the story behind your stage name?
Nish Wadada: "Nish is just an abbreviation of my real name, Eunice; a name people have been calling my by for as long as I can remember. Translated from Greek it means "victory". Wadada is the Amharic word for "love". Adding the two together, you get "victory of love", which summarizes beautifully what I want my music to represent. Before I started doing reggae, I still performed under my real name, Eunice Vieira, but to avoid all confusion I opted for Nish Wadada; a new name for a new beginning!"

Tracks like 'Kriolo' and 'Korda', which are both celebrations of your Creole identity, give 'Jah Calling' a bit of a Cape Verdean flavor.
Nish Wadada: "Absolutely! In both songs I sing in Portuguese Creole. Cape Verdeans are a mixed-race people of African and European descent. In fact our history is far from a fairytale. In 'Kriolo' I stress the fact that we shouldn't forget where we came from even though that heritage also means we're neither one nor the other, which can cause an identity crisis. In short: Creole people, know who you are and whence you cometh!"

Being of Cape Verdean descent, but raised in The Netherlands, what's your stance in the whole Black Pete (Zwarte Piet) discussion?
Nish Wadada: "(laughs) To start off with, I'm kind of surprised it took this long to become an issue. Personally I've always found it to be somewhat of an odd story. It so happens that I was born on São Nicolau, one of the ten islands that make up Cape Verde. In any case I'm not a big fan of the whole commercial side of Sinterklaas. The story itself is ambiguous to say the least: on the one hand you've got Sinterklaas (Saint Nicholas, red.) handing out gifts and sweets to the children, but on the other he's accompanied by a bunch of glorified slaves. On top of that the whole thing is in fact an elaborate lie we tell our children and being Rastafarian, that's not something I want to partake in."