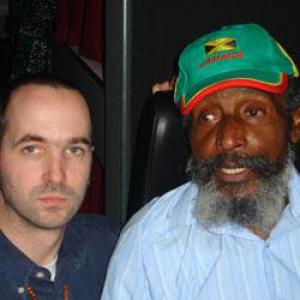 Blessings Brother Sam. Nice to have The Mystic Revelation Of Rastafari back in Belgium once again.
Brother Samuel 'Sam' Clayton: "Blessed be the ties that bind our hearts in one love!"

As a logical opener, can you tell us how The Mystic Revelation Of Rastafari got started or formed all these years ago?
Brother Sam: "It was started by Count Ossie (born Oswald Williams, 1926, St. Thomas, Jamaica, Jamaican drummer and band leader who founded The Mystic Revelation Of Rastafari in the 1940's, red.) in the 40's, when the Rastafarian brethren used to sit together and play the drums to console their spirits. In Jamaica we already had kumina (cultural form indigenous to Jamaica. It is a religion, music and dance practiced by in large part Jamaicans who reside in the eastern parish of St. Thomas on the island. These people have retained the drumming and dancing of the Bantu-speaking peoples of the Congo, red.), the maroons (from the American/Spanish word cimarron, meaning "fugitive" or "runaway", were runaway slaves in the West Indies, red.) played their drums and you had the pocomania tradition (a religious group in Jamaica whose worship is characterized by singing, dancing, spirit possession, speaking in tongues and healing rituals, red.) as well. The Rastafarians drew from those traditions."

One of the first great occasions that brought The Mystic Revelation Of Rastafari into the spotlight, was the visit of His Imperial Majesty Emperor Haile Selassie I of Ethiopia in 1968, where Count Ossie played to welcome him in Jamaica. Were you present on that occasion?
Brother Sam: "Yes! I was there because I was a part of the Rastafari delegation that went to Africa. We spent six months in Ethiopia, at His Majesty's command and expense, so that we could see, study and understand Ethiopia, the place where we would like to go."

This year marked the bicentennial of the abolition of slavery. How important are these celebrations to you as a Rastafarian and a descendant of African slaves?
Brother Sam: "It's very special, so special even I think every person should celebrate it in their own way, even if it's only by writing a small poem or something."

The Mystic Revelation Of Rastafari has never been a group interested in making popular music or gaining world fame, none the less you have been around for nearly fifty years now. What's the secret behind that longevity?
Brother Sam: "Well, we are defenders of the faith, lovers of humanity and we are prophets, so we perform for everybody, big or small, in love!"

As a defender of the faith, as you put it so nicely, do you believe in the restoration of the Ethiopian throne? Can there be talk of a successor to His Imperial Majesty Haile Selassie I?
Brother Sam: "As the Bible says: "On the sides of the north, the great king, Jah is known in his palaces for a refuge. For, lo, the kings were assembled and passed by. They saw it and so they were marvelled, troubled and hasted away. Fear took hold upon them. Thou breakest the ships of Tarshish with an east wind (Psalm 48, Beautiful for situation, the joy of the whole earth, is mount Zion, on the sides of the north, the city of the great King. God is known in her palaces for a refuge. For, lo, the kings were assembled, they passed by together. They saw it, and so they marvelled; they were troubled, and hasted away. Fear took hold upon them there, and pain, as of a woman in travail. Thou breakest the ships of Tarshish with an east wind. As we have heard, so have we seen in the city of the Lord of hosts, in the city of our God; God will establish it for ever. Selah, red.). The Sea of Tarshish is now known as the Mediterranean; the division between Europe and Ethiopia. Europe has always wanted to come over and rob and steal from Africa, also in Ethiopia where the kings had to send them back time after time. Until finally, when Italy came to steal Ethiopia, His Majesty, as King of Kings, Conquering Lion of the Tribe of Judah, drove them back out...apart from the five years they occupied Addis Ababa. Mussolini got the worst beating; he didn't only lose the war, but was executed and hung upside-down to show everybody how wrong he was. They say (starts singing): "Trouble Zion King, Babylon trouble Zion King. Trouble Zion King, Babylon trouble Zion King. What a botheration when you trouble Zion King!" You see, the King of Kings was ordained to come and free all the countries under colonial rule. (starts singing again) "The Lion of Judah, shall break every chain, and give us the victory again and again!" He came to break the colonial chains! All countries that were under colonial rule were inspired by His Imperial Majesty, because Ethiopia never succumbed to foreign invaders. That knowledge became the stimulus for them to become free also. His Imperial Majesty was also the head of the Nyahbinghi Order. Nyahbinghi means ‘death to all black and white oppressors'; that does not mean that we were literally going to chop their heads off and kill them, but that we had to kill oppression. That is why His Imperial Majesty addressed the United Nations in a firm way: "Until all Africans stand and speak as free beings, equal in the eyes of all men, as they are in the eyes of Heaven; Until that day, the African continent will not know peace. We Africans will fight, if necessary and we know that we shall win, as we are confident in the victory of good over evil." (H.I.M. Haile Selassie's address to the United Nations Oct 6, 1963, red.)."

As a Rastafarian elder, do you pass on your knowledge to the youths in Jamaica? Do you teach or give lectures about Rastafari?
Brother Sam: "Yes, we go and talk in schools and universities. It's important to do that and project what Rastafari is about, because a nation without the knowledge of its past is like a tree without roots (quote by Marcus Garvey, red.)! It's up to us to pass on that history!"

Brother Sam, I want to thank you for taking the time out to do this.
Brother Sam: "I do appreciate it, but we want the world to know that reparations must be made for the barbaric act called slavery that was bestowed on the African people; reparations in the form of global restructuring, which can be the flagship for world peace!"