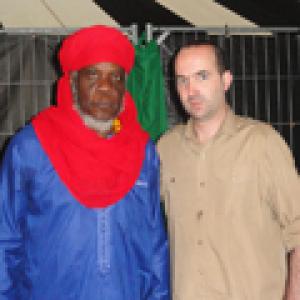 Muta, what does Marcus Garvey represent to you on a personal level?
Mutabaruka: "To me Marcus Garvey is where reggae music got its inspiration. He's what inspired the philosophy of Rastafari. This year we're celebrating the hundredth anniversary of the foundation of UNIA, the United Negro Improvement Association, which was the largest black organization the world has ever seen. It was established in July of 1914 by Marcus and his first wife, Amy Ashford Garvey. His work has inspired so many artists, that I would go as far as to say, that without Garvey we wouldn't have had what we now know as reggae music. He launched the principle of Africa for the Africans and showed black people in the diaspora a way to regain their dignity and identity; something that wasn't a given in places where being black was still seen as something inferior. Suddenly Africa was no longer the Dark Continent, but a place black people from all over the world could call their home. My personal connection to Marcus Garvey is that I was still taught by his son Marcus Garvey Jr., who used to teach engineering and science. I also used to hang out at Amy Jacques Garvey's house, Marcus Garvey's second wife, at 12 Mona road, where we used to gather and have discussions and conversations. The combination of Marcus Garvey's philosophy and the spirituality of Rastafari, is what really formed me."

Do his teachings and philosophy also have to offer something for people who are not of African descent?
Mutabaruka: "Well, we can't deny that Garvey's main trust was race first. You have to remember that back in the nineteen twenties racism was still rampant in most parts of the world. His answer to the discrimination and oppression he saw everywhere around him was trying to instill his people with a black consciousness and African awareness. Rastafari also started as a means for Jamaicans to escape the heritage of colonialism and slavery, but somehow managed to appeal to a broader audience."

Where do you stand in the whole reparations versus repatriation discussion?
Mutabaruka: "To me, they are both of equal importance; reparations for the suffering the African people went through in the slavery era - in my view still one of the largest atrocities ever committed - and repatriation because a lot of black people in the diaspora still see Africa as our home. We never asked to be transported to the Caribbean or America; we were brought there by force. It's as Marcus Garvey stated: "Africa for the Africans, at home and abroad!"."

There was a time when Marcus Garvey was an underground figure only remembered by a selective few. With him posthumously being awarded the Jamaican Order of National Hero in 1969, that situation has fortunately changed for the better.
Mutabaruka: "Luckily we now live in a time of science and technology; all the information you want is but a few clicks away and with sites like Amazon you can order all the books on Marcus Garvey you want. I still remember a time back in the nineteen sixties, when black literature was banned in Jamaica."

Marcus Garvey is part of that list of iconic figures that also includes people like Martin Luther King Jr., Malcolm X, Nelson Mandela and so on. Where are the great leaders of today?
Mutabaruka: "The thing is people will always be looking for messianic figures, but instead of looking for a messiah, we should aspire to become one ourselves. The people you mentioned there set a great example to follow, but since they are no longer with us, it is up to us to continue their legacy. We are who we have been waiting for! I am my ancestor and my ancestor is me. As Marcus Garvey said: "If you have no confidence in self, you are twice defeated in the race of life. With confidence you have won even before you have started!"."