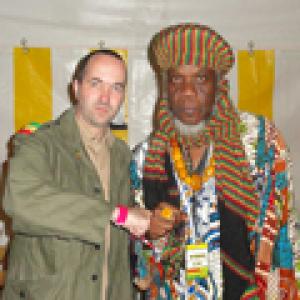 Mutabaruka, am I right in saying before Rastafari came into your life you were more of a Black Power influenced individual?
Mutabaruka: "Yes, definitely so. Marcus Garvey's son was one of my teachers when I was still attending school and I was acquainted with Garvey's wife as well. A lot of my teachers were into Black Power and one of them introduced me to Malcolm X. Black Power was always more of a social thing to me; it lacked the spirituality I eventually found in Rastafari which combined all the elements I'd been searching for."

These days Rastafarianism is a worldwide phenomenon but the whole Black Power movement seems to have evaporated.
Mutabaruka: "The reason for that is that the Black Power movement was heavily infiltrated by the FBI who eventually succeeded in destabilizing the movement with their COINTELPRO program (an acronym for COunter INTELligence PROgram) was a series of covert, and at times illegal, projects conducted by the United States Federal Bureau of Investigation, FBI, aimed at surveying, infiltrating, discrediting, and disrupting domestic political organizations. The program ultimately encompassed disruption of the Socialist Workers Party, the Ku Klux Klan, the Nation of Islam, the Black Panther Party and the entire New Left social/political movement, red.). From the get-go the Black Power movement has always been somewhat of an American thing, when Rastafarianism always had its eye on the rest of the world. Rastafarianism focused on Africa with Haile Selassie I as its spiritual nucleus, when the Black Power movement focused on socio-economic changes, mainly in the US and Europe."

You've been hosting your own show (The Cutting Edge, Wednesday night from 8 - 11 pm. Pacific Standard Time, red.) on Irie FM for many years now. What do you get from doing radio that you don't necessarily get from performing on stage or writing poetry?
Mutabaruka: "Well, for starters it allows you to reach more people and it also allows me to talk to the Jamaican public about subjects I wouldn't necessarily tackle on stage or in my publications. It's a good way to awaken the consciousness in the Jamaican people as in many ways Jamaica is still a backward very Americanized society. I praise myself lucky, because being given the opportunity to play what I want and say what I want on national radio for four hours straight is not nothing. It's also a very rewarding thing as after so many years I can really see the return from what I'm doing. That being said I brought some fire down upon myself on occasion as well as my views often conflict with those of the church who've already declared me the antichrist! (laughs) I'm not what you would call an "orthodox Rastafarian", I often think outside of the box and that means I'm criticized in Rastafarian circles as well. Daring to question or criticize, are things that scare a lot of people because it shakes the foundations they have created for themselves, but I can only state things as I see them."

Your radio show is broadcast from Ocho Rios, but you live in the country I believe?
Mutabaruka: "I live in a place called Temple Hall in Saint Andrew. I my view you can't be a Rastafarian and live in a city. One of the pillars of Rastafarianism is self-sufficiency, so I try and grow some vegetables and encourage others to do the same."

You don't smoke; does that mean that you don't use ganja at all?
Mutabaruka: "No man! Smoking is definitely not the best way to use ganja. Not that I have anything against smoking it, but it's simply not for me. I could grow it, but it's illegal and I wouldn't want the police to find a stick they can beat me with. I prefer to steer away from that kind of controversy around my person."

What came first in your life poetry or music?
Mutabaruka: "Poetry! I never considered myself a musician. In Jamaica most people listen but they don't read, so we had to find a way to confront them with an oral form of poetry and that's how what we now know as dub poetry got started."

Where did you draw from? Which poets or authors influenced you?
Mutabaruka: "Ironically it's not poets who influenced me most; I mainly drew on the writings of activists like Marcus Garvey or Stokely Carmichael to be honest."

What is poetry all about for Mutabaruka?
Mutabaruka: "There's an old expression that states the pen is mightier than the sword. I use poetry as a way to express myself and release tension. If I wouldn't do it in my poems, I might do it in a way I'd come to regret."