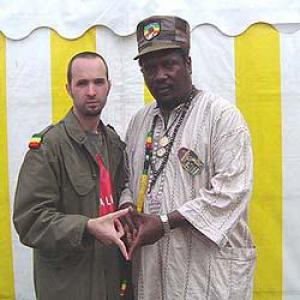 To many, Mikey General is still only known as Luciano's blood brother and sidekick on stage; time to put this humble Rastaman in the spotlight and let him talk about his roots, his influences and the things that are dear to him.

Mikey, from your biography I gathered that, contrary to a lot of Jamaicans, your parents decided, somewhere in the sixties, to move back from London to Jamaica. Where they that disillusioned with life in Europe?
Mikey General: "No, what happened is that at that time there was a man in England by the name of Enoch Powell. He was a racist preaching his racist philosophies. My parents used to hear him talk and they didn't like what they heard at all. In the sixties there was still a lot of racism going on in England lifestyle-wise. I never experienced any racism over there. I had to come back to Europe to experience and a few black people living there then. When I was two years old, in 1965, my move back to Jamaica. I think she made a great decision then, because Jamaica is a great place, culturally and that. In Jamaica we don't talk about it. When you go to school there, your classmate can be white, black or Indian; it's all mixed."

Unlike artists like Buju Banton and Capleton who converted to Rastafari at a later stage in their career, for you consciousness has always been a primordial thing.
Mikey General: "Yes man. I grew up in the seventies, listening to deejays like U Roy, U Brown, Ranking Trevor, Ranking Joe and singers like Horace Andy and so many others. These people only sung about roots, culture and righteousness. Actually, Barrington Levy was my favorite artist. In that time Jamaica was going through a lot of strife and struggle. From the start of my musical career singing about that came naturally to me. I can not stray from it and I can also see very clearly how the music from people that came before me, like Bob Marley, still stands out today. Next year it will be 25 years ago since he passed on, but his music still lives on. That shows that it pays to do the good and righteous thing!"

How did you come by that name 'General'?
Mikey General: "I got it through the game of football. I played soccer quite well and my mates used to cheer me on shouting: "Go on general!", so that's how it stuck."

Do you still play the game?
Mikey General: "I still love soccer, but I don't play it as much as I should as you can clearly judge from the size of my figure! (laughs) It's still my favorite game though."

Your label is called Qabalah. Because of the involvement of people like Madonna, the whole kabala thing has grown in interest and popularity, but I believe a lot of people still don't know what it is all about.
Mikey General: "It's a Jewish form of mysticism, just like Islam has the Sufi mysticism. It talks about the importance of the Hebrew words and letters in creation. It states that it was the word that created everything; hence the importance of the letters."

I can't leave out talking to you about one brother, and I believe I can literally say "brother" in this case, and that of course is Luciano. How did your relationship start out?
Mikey General: "I hooked up with Luciano when I met him at Castro Brown's studio. When I saw him for the first time, I saw a very humble youth that was always smiling. There was an immediate connection and I just knew I had to team up with a guy like that. He's my brethren now and I love him dearly!"

Could you maybe share some words of wisdom to end the interview?
Mikey General: "Yeah! What I want to say is just love and respect each other. We're living in a world of so much war and turmoil. We need peace, we need prosperity and happiness and that can only happen if we love each other. Jah is love, so he who abides in Jah, abides in love! Selassie I, Rastafari!"