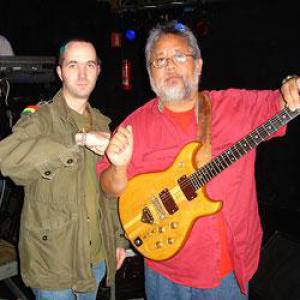 Mikey, you played with almost all the greats in Jamaica, but where did it all start?
Mikey Chung: "Basically I started doing studio sessions in the early seventies. I did recordings with just about anyone you can think of, from John Holt over Ken Boothe to Leroy Sibbles and so on. At one point I hooked up with Sly & Robbie and they got me in touch with Peter Tosh. I then started working for Island Records with artists like Black Uhuru and Grace Jones. I attended the Jamaica School of Music and through that education, I also got involved in the jazz scene. I also play some keyboard, so over the years I did just about everything there was to do musically speaking."

Did you already know from an early age you wanted to pursue a career as a musician?
Mikey Chung: "Not really. Music really came as a blessing to me, because when I left school I went to college to get a degree as an electrical engineer. Because I noticed I really had the potential to play as a session musician, music, which was a hobby up to that point, gradually took over."

Do you come from a musical family?
Mikey Chung: "Not at all! (laughs) Neither my father nor my mother ever played any music, but my brother (Geoffrey Chung, red.) and I just took it up."

You already mentioned one key artist you worked with in your career: Peter Tosh. How do you remember him?
Mikey Chung: "I remember only good things. He was a very nice guy. I know a lot of people think he was violent and aggressive, be he just stood for what he believed in. Truthfully he was just a nice tender loving person, really funny to. I think he was a true artist. I liked Peter a lot and everybody in the band felt the same way."

As a guitarist, do you usually stick to one brand of guitar or do you switch regularly?
Mikey Chung: "I switch all the time, so I play Fender as well as Gibson. What happened is that early on in my career I experimented a lot with different guitars. I used one for this, the other for that and so on. Then one time I got an Ibanez and found out it just about did all the things I wanted to do, so I stuck with that one. I still use my Gibsons and Fenders, but the Ibanez is kind of my favourite."

Do you teach as well or is that not really your thing?
Mikey Chung: "Well actually I started doing that from early on in my career; from the time I was still with Peter Tosh to be exact. I had a lot of students; Pablo Moses, for example, was one of my pupils. I'm still trying to spread my talents and the music because Jamaica needs it. There are a lot of youths out there who have the talent but lack direction!"

Alright Mikey, respect and thanks for doing this.
Mikey Chung: "Yeah man, cool!"