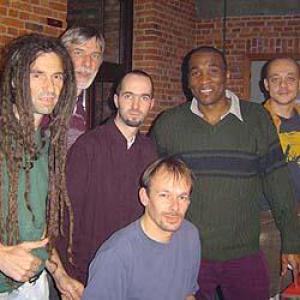 To my knowledge, Mighty Pirates is one of the oldest still enduring reggae bands in Belgium. Where and how did it all start?
Roni Geboers (lead vocal): "In 1989... but we really started jamming in the south of France in 1987. Before that we had already played together a little in Louvain and Brussels. At one point, Hans (Wielockx, red.), the keyboard player, was in the south of France and saw the opportunity to play some gigs there."

Has the line-up of the band stayed the same over the years?
Roni Geboers: "More or less. Yakke (Moens, bass, red.) has joined us. Thierry (Manoka Boka, drums, red.) has been with us for seven years now and for Marc (Van Giel, saxophone, red.,) this must be round about his 10th year in the band."

Your first album 'Enjoy' was released in 2000. We're five years onwards now and things have quieted down a bit. What have you guys been up to in these past years and might there be a successor to 'Enjoy' in the making?
Roni Geboers: "I must admit the work on the new album has been lingering on a bit, but it is very near to completion now."

Does it have a name yet?
Roni Geboers: "Maybe we should call it 'Pirates & Friends' because there are quite a few duets on there: Rasta Bob is there, Rohan Lee sings along on one track and Busi Nkube from Zimbabwe voiced one song when she was visiting. Before we finish more "friends" might always pass by the studio; you never know! (The album was eventually released as 'Give Thanks' in 2006, red.)"

I'm looking forward to it already. Where do you, as a Belgian reggae singer, draw from? Who are your inspirations?
Roni Geboers: "I'm mainly influenced by the great roots singers. I also used to play a lot of rock, jazz and blues, though, and even some funky disco, but for me there's no other music that radiates positivity like reggae does."

Is Mighty Pirates just a reggae band or is there a deeper philosophical Rasta side to your music as well?
Roni Geboers: "Reggae and Rasta are very closely related. If I'm honest, I think we're more reggae band than Rasta movement, but nonetheless, we are a shining example of that ‘one love' spirit. We've been working together for quite some time now and wherever we go, we try to spread a vibe of peace and love."

Just before the summer, Mighty Pirates was one of the bands contributing to the benefit for the late Open Tropen festival (the festival disappeared after more than 15 years, red.). Did this festival hold a special place in your heart?
Roni Geboers: "Well yes, like all festivals hold a special place in a musician's heart. Watching people come together in love and unity is a blessing for a Rasta. And of course Open Tropen was a local festival that I knew and frequented from the very beginning. I watched that festival grow and it became a part of my life. I'm going to miss it."

With the Dutch-Congolese band Makoma you travel the world to play on stages everywhere. Doesn't it feel strange to make the switch back to Mighty Pirates then and play in small youth clubs like here tonight in Wollewei in Turnhout?
Roni Geboers: "Of course there's a difference, but the principle is the same and that is making music. The size of the audience doesn't really matter; what is important is that someone is listening. Touching one person with your music has far more importance than playing for ten thousand people who might not even be paying you any attention."

Have you ever been to Jamaica?
Roni Geboers: "No, the closest I have been to Jamaica, spiritually speaking then, is Ethiopia, but not too long ago I was in Papua New Guinea and I think that island must bear a lot of resemblance to Jamaica. Maybe I'll get there one day!"

To conclude this interview, do you have any message to give to the readers and your fans?
Roni Geboers: "To all those that play an instrument or sing: "Keep on playing and singing! One Love!""