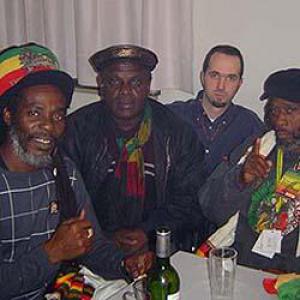 The Mighty Diamonds are part of that great tradition of vocal trios in Jamaica. At one point during the seventies the island was swarming with trios like The Meditations, The Gladiators, The Itals and many more. Where did that tradition come from?
Tabby: "Already during the sixties you had groups like The Heptones, The Melodians, Toots & The Maytals and Desmond Dekker & The Aces. The style of music changed in the seventies but the line-up stayed. We are about the only group that survived (in its original formation, red.) until now."

What's the secret that held you guys together when so many other bands disbanded over the years?
Tabby: "The secret is really nothing that big; it's just how we approach the whole music business. From the time we started we were never very interested in the whole financial part of the music, only our love for it was important. We just believed we would make it on an international level one day and it has paid off."

On a spiritual level also, The Mighty Diamonds are an example of unity; you being a Nyahbinghi and Judge being Twelve Tribes.
Tabby: "They say it's the same brethren with a different mind...It's all about the same God you know. We're all the same, we just think differently. It's the same livity."

In the past few years Jamaica has seen an enormous increase in violence. How do you see that evolving and what is your view on the problem as a Rastafarian?
Tabby: "I think when you look at a country's history you'll always find a period of unrest, but as we say in Jamaica: "After every storm, must come a calm.". Jamaica is still a very nice place you know!"

A lot of artists have migrated abroad though just because of those issues. Is it important for you to stay firmly grounded in Jamaica?
Tabby: "Personally I don't have any problems in Jamaica and I'm not creating any problems for anyone else either. Maybe that's why? Rastafari!"

Probably your biggest hit during all those years is 'Pass The Kutchie', but it only became world-famous after it had been covered by the English band Musical Youth as 'Pass The Dutchie'. How did you feel about that?
Tabby: "I still felt a part of that whole success. Musical Youth helped to take the song to an international level."
Bunny: "'Pass The Kutchie' was a huge hit in Jamaica and then we were told Musical Youth wanted to cover it but wanted to change "kutchie" (Jamaican slang for a herb pipe, red.) to "dutchie" (Jamaican slang for a cooking pot, red.). I could understand that and the song still worked, so it was all right."

You guys played a very small part in the movie "Rockers" as garage mechanics. How did you end up in that movie and how was that experience?
Tabby: "(laughs) Well, we knew Horsemouth (Leroy 'Horsemouth' Wallace, drummer and lead role in the movie, red.) very well and he actually used to live behind that welding place workshop we are working in in the movie. He asked us to play a part in the movie. It was alright you know but I wouldn't have minded playing a bigger part! (laughs)"
Bunny: "The producer, Bafaloukos (Ted Bafaloukos, red.), really liked The Mighty Diamonds and pieced the thing together so we could play a small part in it. It's a shame they haven't made another movie like that, because we really liked the whole movie thing you know (laughs)"

How do you feel about playing at an event in honour of Bob Marley? Is that still special?
Tabby: "It's always special to play at Bob Marley's birthday. He was an icon and opened the way for reggae music. We have to respect that."
Bunny: "Furthermore Bob Marley was our brethren. We were there when he played his last concert in Jamaica, on the Reggae Sunsplash festival (July 7th 1979, red.). We knew him in the flesh and used to reason and thing."

I want to end of on a spiritual note. In these times of tribulations, war and sufferation, in your opinion what should be the role and message of the Rastafarian?
Tabby: "We have been spreading that message for a long time now and that is: "Love & unity!" If they don't want to listen, there's nothing we can do. A lot of people just think differently from the Rastafari way."
Judge: "I&I fear not you know, for the Lord is with us. We know what the prophecies say, so we knew these times were coming. It was written in the Book of Revelations. Some men will be safe from the wrath of God, some men won't, but I&I feel safe."
Bunny: "Most of the things you see going on in the world right now are just greed. This man wants the other man's things."
Judge: "But man has to realise that he enters this world with nothing and that he will leave with nothing. Most people don't realise this, so they end up with nothing!"

That's a nice note to end on. I want to thank you for this interview!
Mighty Diamonds: "Yeah man! Nuff respect, Rastafari!"