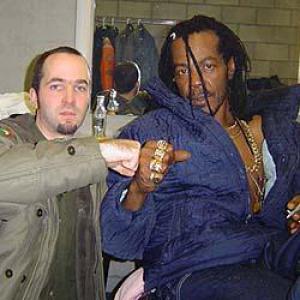 Michael, for those first records, how did you hook up with Yabby You?
Michael Prophet: "I started out with Yabby You in the seventies. The first record was released in 1978. It started in my youth days, singing as a choirboy. Then I started getting on the road in the soundsystem business. Everything expanded from there and I hooked up with Vivian Jackson (aka. Yabby You, red.). He's great; I'm very thankful."

Who were your direct influences as a singer?
Michael Prophet: "My main man was Bob Andy. He's got the peak and the reach. He showed me what you can do!"

At one point you moved to the UK; what exactly prompted that move?
Michael Prophet: "Sometimes a man has to move. I'm not bound to one city. I'm a mover. I believe Jah trod all about, so I feel I should too. (laughs)"

That move meant that you arrived in London, a big metropolitan city. How was that for a youth coming from a life on a Caribbean island?
Michael Prophet: "I had already travelled to London before I finally moved there. It didn't worry me because wherever you might go, Babylon system is there! At the same time it's just a system. You just have to be who you are and get on with your life."

Without a doubt your biggest hit was and still is 'Gunman'. Could you tell us how you wrote that tune and what it means to you?
Michael Prophet: "'Gunman' is a part of my life, of my history. While living in Jamaica, in the ghetto, I was robbed by gunmen. That is simply how the song came to be. It was a spiritual thing I think. It was reality."

When you wrote the tune, did you expect it to kick off like it did?
Michael Prophet: "To be truthful, I didn't, but for some reason it just took off. When something happens to you in a natural way, as this happened to me, it gives a song that extra something. It's a message."

Through the years you worked with a number of producers. We already mentioned Yabby You, but there's also Junjo Lawes, Mad Professor, Gussy P, etcetera. Among all of them, is there a favourite for you, for any special reason?
Michael Prophet: "My favourite is still Yabby You, but I kind of like Junjo and Volcano, because Volcano kind of opened the road again for me after things ended with Yabby, so that was great."

Nowadays it seems to be dancehall all around. How do you, as a roots singer, maintain yourself in all of that?
Michael Prophet: "I grew up in the dancehall and was a part of it at one stage. To me it doesn't matter whether it is roots or dancehall; to me music is just music. I'm in the mix. I'm into dancehall; I'm into roots, into everything really. Music is everything. You can't be just compliant, you have to stand your ground as well and make sure you do the right thing."

The next question is a bit of a political one. I'll leave it up to you if you answer or not. A while ago a deal was struck between a number of record labels and some gay rights movements about putting a ban on anti-gay lyrics in dancehall music. How do you see the role of a singer in the age old conflict between "being a role model" and "freedom of speech"?
Michael Prophet: "To be truthful, I've got little to say about that because every man is true to his own heart. I'm doing my thing; another man is doing his thing. That is life. I haven't got anything to say on whether a man is gay or not. That is his life, his road. If that is what he or she chooses, just let it be! I chose my road and if you let me be that's great enough brother! I'm here to carry out my message and get on with my life!"

Talking about a message, can we end this interview with some words of wisdom for the youths reading this?
Michael Prophet: "Just tell them to hold their head up and don't let the system beat them down and make them lose their way of life. Just put your trust in god and you will find a way out! I did it!"