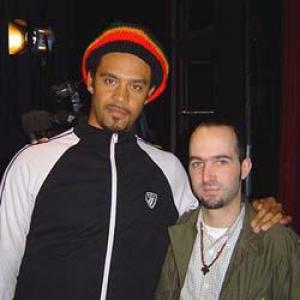 The least you can say about Michael Franti is that the man evolves. He started his career as an angry young rapper and a member of Disposable Heroes of Hiphoprisy, rediscovered himself in Spearhead and finally almost totally did away with the limitations of hip hop to return to being Michael Franti, the singer-songwriter he is today. In this whole mix there has been one constant throughout, however, and that is the message he puts in his music; a message against intolerance and racism and above all a statement for peace. Only recently he's also been able to put that message into his newfound passion: film.

Frustrated by the one-sided media coverage of the war in Iraq, Franti decided to fly to the country himself and talk to the people there. These encounters were put on film and, together with Franti's music, they are the base of the documentary "I Know I'm Not Alone". Michael kindly agreed to come over to Turnhout to promote his film at the Open Doek film festival. A few hours before the screening we managed to pull him aside briefly and ask this advocate of peace some questions:

Michael, you're here today to present your movie "I Know I'm Not Alone". As an introductory question, could you tell us how the idea to make this documentary came to you?
Michael Franti: "Well, I got sick of watching my TV every night and hearing about the war in Iraq from generals and politicians. All they would talk about is the economical and political cost of the war. They never mention the human cost. I wanted to go to Iraq and see with my own eyes how the people are dealing with this war, so I bought a plane ticket, flew to Baghdad and spent a week over there. After that I went to the Gaza strip and the West bank in Palestine to see how people were living there. Mostly I just played guitar for people on the street and then when people would come up to me I'd turn on the camera and speak to them."

I remember seeing you walk around with a small camera at a festival last summer. Did you do all of the filming yourself?
Michael Franti:  "No, I just did a little bit of the filming; the rest was done by some people that were with me on the trip. I was interviewing people on camera most of the time. I directed and edited the film afterwards."

What conclusions did you draw from this trip? What did it teach you?
Michael Franti: "The main thing it thought me is that everyone suffers in a war, no matter what side they're on. The American soldiers that are over there, went there believing they were doing the right thing, but now they realise there are no weapons of mass destruction and Saddam wasn't involved in 9/11. They feel like they were lied to and are just waiting to get killed over there. As for the Iraqis, they lost 175.000 civilians up till now. They are happy Saddam is gone, but more than anything they want the Americans to leave and let them take care of their own life and their own country."

You recently went on a totally different trip too, going to Jamaica to record an album with Sly & Robbie and Chris Blackwell, founder of Island Records and the man behind Bob Marley. How did that come about?
Michael Franti: "On my last record ('Everyone Deserves Music' red.), I already worked with Sly & Robbie on two tracks, but this time I wanted them to play live drums & bass. So I called them up and told them I wanted to do a whole album with them. I had written about 30 songs when I went over there and I would just tell them: "This one is in A-minor and a-b-b-a." and they would come up with a riddim. The music for this record is not going to be pure roots reggae, it has a reggae foundation in the drums and the bass, but there's also a lot of funk and my own flavour on top. What Chris Blackwell is concerned, well, I already knew him for some time, since 1991. He hadn't been in a studio in 22 years, so I was very inspired and exited to get Chris in there. He produced some of my favourite records and he has a desire within himself to bring a kind of music to the world that has a strong political message but that also is danceable."

Let's stay on that topic of putting a message in music. Only few artists seem to be interested in putting a message in their music anymore. The whole black consciousness scene that grew out of the civil rights movements in the sixties seems to have made way far what in Jamaica is referred to as the "bling" generation. In your opinion what is the cause for that?
Michael Franti: "That's the term in America too, pure bling bling! (laughs) I remember when 'Nation Of Millions' ('It Takes A Nation Of Millions To Hold Us Back' - Public Enemy red.) came out. The general reaction was: "Wow, this is a strong political message!". That record sold a million copies, but then NWA came out with 'Niggaz4life', a record that sold 4 million copies without even have gotten any airplay. When that happened all major record labels opened their eyes and said: "If this is what they can do without any publicity, we should jump on this train.". So from that moment they really stopped signing conscious artists and replaced them with so-called "gangstas".  In the nineties a lot of these record labels fused or got bought out by bigger ones. Now there are just about five major labels left that own everything. They don't really care about music; they care about their share holders. The bottom line is money. It's the market place dictating the message, so it takes a strong artist to say: "Fuck the market place!" I'm not here for the market place, I'm here to say what I have to say and do the best I can to deliver that message to the people. It's always been an uphill struggle for political artists, even for Bob Marley. He didn't really become well-known until he was almost dead, but fortunately his music lives on. I never got into music because I wanted to get rich and retire. I wanted to make music for the people. It's more important to me that after my death a thousand people can sing my songs then having left a thousand dollars on my bank account."

Let's go back to the movie. Was this documentary project just a one-off or is it going to inspire more?
Michael Franti: "We are already planning more. I like to travel to places where there is conflict and document it. A good way to do that is through music, by writing songs about what I see and meeting other musicians along the way. We're planning to go to Africa and I also want to do a film about Native American people and Aboriginal people. Their situation is very similar so I want to do a film to compare both. We're going to continue as a small movie production team making movies about crises in parts of the world that don't regularly get reported on."

To end this interview is there a message you want to share with our readers?
Michael Franti: "My message is that I wish people ease of heart; that whatever is in your heart passes through you with ease. We don't have to live the way we are told to live on TV; we can live from our heart! I wish you ease of heart!"