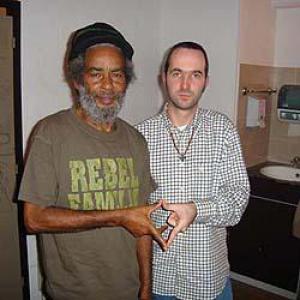 Max, you started your career in music after winning a talent show and then right after got involved in the vocal trio the Emotions. What kind of music did you guys do in those early days?
Max Romeo: "Basically we were just moving out of the ska period into rocksteady. I didn't stay in the band for too long, we did about 5 or 6 recordings together and then one of the members (Lloyd Shakespeare, red.) died and the other (Kenneth Knight, red.) migrated abroad. So that was the end of the Emotions. By then I had already launched a solo career as Max Romeo though."

Where did you get that 'Romeo' name?
Max Romeo: "It was given to me while I was still going to school. I was the guy writing love verses for other guys who didn't know what to say to their girl. They called me Romeo after the character from the Shakespeare play "Romeo & Juliette" and added 'Max' which was short for 'Maximum', so 'Maximum Love' was my name."

Still your most popular set to date is the set of tracks that you recorded with Lee Perry. How do you recall that collaboration?
Max Romeo: "Lee is one of the greatest producers I've ever worked with, a very inspirational great person."

Every time you release a new record it will be compared to that one. Do you see that 'War Ina Babylon' album as a blessing or a curse?
Max Romeo: "It's a blessing in disguise. It cemented my career so to speak. It made my name known all over the world; especially the track 'I Chase The Devil'. The album produced quite a few hits: 'War Ina Babylon', which is one of the most sampled tracks in reggae music - I'm really proud of that - 'One Step Forward' and 'Norman The Gambler', which was a big hit in New York."

In the beginning of your career you did songs like the infamous 'Wet Dream' which was banned in several countries. You must have been one of the first artists in Jamaica to have faced censorship like that. If we then reflect on the present day situation, how do you regard the whole dancehall scene where sexually explicit or violent lyrics have become an inherent part of the music?
Max Romeo: "(laughs) It's not a scene that I embrace because it's too violent. It's disrespectful too and it preaches pure violence which is a drawback for me. I don't fight against it, but it's certainly not my favourite thing. They should tone it down a bit."

You left Jamaica at one point only to return in 1990. What prompted that return after such a long stay abroad?
Max Romeo: "In 1976 I did a song that certain people in certain parts of society didn't appreciate - to say it mildly - so it was getting a little dangerous for me (With songs like 'Let The Power Fall On I' and 'No Joshua No, Press Along Joshua', Max had become a fierce supporter of Michael Manley's People's National Party. On top of that the sleeve of his 'Revelation Time' album, adorned with the hammer and sickle, branded him a communist, red.). I decided to migrate to New York where I immediately got a job writing for a Broadway play called "Reggae". I had my wife and kids with me and they also did not want to return to Jamaica because of the political situation, so I stayed in New York. After some years though, I realised that this city was not the place for me. It all moved too fast, so I returned and I've lived in Jamaica ever since."

Didn't you ever think of putting that play "Reggae" back in theatres? The production of a stage version of "The Harder They Come" is under way, so it might be the right time.
Max Romeo: "Well yeah, they should give it a thought. Back then the play already closed after seven weeks. It was considered to be too explicit, too violent. Looking back on it now, that might be surprising because nowadays everything including music has become more violent. It might do well now and it was a good play."

Talking about violence; the stories of Jamaica becoming a more and more violent place are even starting to seep through here in Europe. How do you see that situation evolving?
Max Romeo: "I think there's a lot of covert street destabilisation operations running, because it's not natural what is happening. To give you an example: You have guys running around with 500$ guns begging you for 20$ to buy some food. It's getting from bad to worse, but still there's something that tells me it's going to end real soon because they are getting rid of these guys one by one."

At one stage you were quite politically involved. You wrote a number of tracks in support of the PNP. Has that involvement changed or are you still into politics?
Max Romeo: "Actually it wasn't me who wanted desperately to be a part of it. They approached me and asked my permission to use the songs, so I agreed. The songs weren't written especially for the PNP, they had a Biblical content but they depicted perfectly what was happening in Jamaican society at that time, so I let them use them. After a while I quit doing that though, because like Bob Marley said in one of his lyrics: "Never make a politician grant you a favour, they will always want to control you for ever." (from the song 'Revolution' on the 'Confrontation' album red.)."

I would like to end the interview with a spiritual question. How did Rastafari find you? When did everything change for you?
Max Romeo: "It was back in the beginning of the seventies. I was singing all these rude songs at the time, tame stuff if you compare it to what they do now though, but when my first child was born, I started questioning myself. How would I explain these lyrics to my children? They would look upon me as a dirty old man (laughs); so I quit singing these songs and started doing roots & culture and I've embraced the faith of Rastafari ever since."