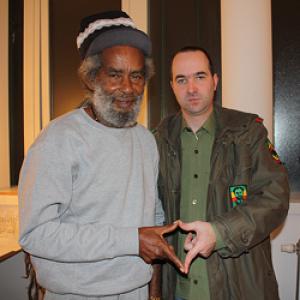 Max, when did the whole farming thing start for you?
Max Romeo: "That was in the nineteen nineties - I think it was 1994 - and the first thing I did was raise a small flock of goats. I immediately liked the feel of the whole thing, because apart from music the only blessed thing to do is to feed people and truthfully you can't play music on an empty stomach so maybe feeding people is still more important in that way. Personally I try to provide both: food for the stomach and the mind. After a while I started planting yams and banana plants and from the goats I moved on to rearing pigs and later still to cattle. Hurricane Sandy just passed and destroyed almost all of my banana plants, so when I finish this tour I have to start replanting immediately. Apart from music, farming has always been my great passion, because I grew up with a grandmother who was the breadwinner of the family and she made her money growing crops. My farming activities are still on a smaller scale at the moment, but I'm always on the lookout for more land to expand."

As a singer you still tour for a substantial part of the year. Who takes over at the farm when you're not there?
Max Romeo: "I'm working with a crew of seven people at the moment and they take care of things when I'm away. Three guys take care of the livestock and the others tend to the fields."

Is your produce meant for personal consumption or do you take it to market to be sold?
Max Romeo: "The major part of what we produce goes to market to be sold off. In my family we don't consume a lot of meat, so apart from a little goat meat everything else is sold."

When talking about Rastafarianism often the same cliché subjects - repatriation to Africa and Marcus Garvey to name few - are broached. An important pillar in the Rastafarian philosophy is self-sufficiency. Should I see your farming activities in that perspective?
Max Romeo: "Well the whole thing is inspired by Marcus Garvey anyway, because he told us to look for our riches in the soil ("We believe in the farmer and in ownership in the soil as the most independent life...", quote from an editorial in Marcus Garvey's Negro World, red.). I strongly believe in that, because no man should suffer hunger and the best way to avoid that is to grow your own food."

I know some of your children are already following in your footsteps where music is concerned, are they equally interested in your farming activities?
Max Romeo: "Interesting question, but the answer sadly enough is no! They all want to go to university or go into the music business like you just said and I try to give them what they ask for. It's not just me and my children though; it's something most farmers in Jamaica are going through with their children. A lot has to do with how farmers are treated in society; we don't get paid nearly enough for our produce. Half of the time farmers are struggling to get by. The younger generation is not being enticed to get into farming; it's almost as if it's something degrading. I'm quite gloomy about the future, because if this trend continuous after my generation is gone there will be famine in the world because no one is growing crops or raising livestock anymore. The world is facing a potential disaster in that area, because at the end of the day we can't eat computers, can we? It's something world leaders should urgently look into!"

How important are terms like "organic" or "biological" to you as a Rastafarian farmer?
Max Romeo: "Terms like "organic" and "biological" are too expensive for most Jamaican farmers; most of us have to make do with the products we can find and afford. Luckily most of the land in Jamaica is quite fertile, so you don't need to add these chemical fertilizers anyway. Apart from that we don't spray insecticide; we just weed using a machete, so I guess in that way a lot of the agriculture in Jamaica is just organic by nature. (laughs)"

Which part of the whole planting, growing and harvesting cycle do you like most?
Max Romeo: "Well, certainly not the selling part; with the prices we get that's the most miserable part of the whole process. For me it's all about the planting and watching the crops grow. It gives me a thrill to watch crops grow from a seedling into a big plant. It's like a woman carrying a baby for nine months; each month you watch her belly grow bigger until finally the baby is born. As I say I love farming!"