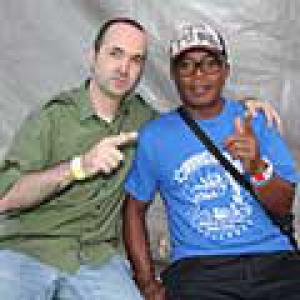 Matic, as one of the most respected trombone players in reggae music, I have to start by asking you if you've always been playing that instrument.
Henry 'Matic Horns' Tenyue: "Well, when I first started out playing as a professional musician, back when I was still a member of Matumbi, I still used to play the saxophone as well. The first tune I played on was called 'Point Of View' and in that song you can hear me play the sax."

If I'm well informed you learned to play as a member of the Salvation Army.
Henry 'Matic Horns' Tenyue: "That's absolutely correct, yes. I actually started out playing the cornet and the flugelhorn."

I suppose you weren't exactly playing a reggae or ska repertoire yet in those days?
Henry 'Matic Horns' Tenyue: "(laughs) No, but coming from a Jamaican family that's what I listened to at home. My father used to go back and forth to Jamaica all the time and always brought records back with him. That's how I fell in love with Don Drummond's trombone sound. Even though I always liked the trombone, it took me a while before I could get my hands on one. Even in school, where I was also in the band, they made me play the tuba."

You already mentioned Matumbi. How did your involvement with that band start?
Henry 'Matic Horns' Tenyue: "At the time, my brother was working as a mechanic in a garage when one day Eaton ‘Jah’ Blake, bass player for Matumbi, brought his car in for service and the two got talking. One thing led to another and before I knew it, me and my brother were the horn section for Matumbi. The funny thing is that, because they were looking for a saxophone player and I really played the trombone, I still had to run out to find a sax before I could head to the studio to record."

As a horn player, did you suffer from the digitalization that hit reggae music in the nineteen eighties?
Henry 'Matic Horns' Tenyue: "Not really, no, as in that period I was doing a lot of touring with people like Linton Kwesi Johnson, Aswad, Winston Reedy and eventually also UB40."

I've seen you perform countless times with Mafia & Fluxy. When and how did that relationship start?
Henry 'Matic Horns' Tenyue: "We kept bumping into one another as session musicians. Eventually Mafia & Fluxy also started recording their own music and that's when they also started calling on me whenever they needed a horn player. We go back a long way."

If we say Mafia & Fluxy, we also have to say Gussie P. I believe your relationship with him goes back even further.
Henry 'Matic Horns' Tenyue: "Right, Gussie and me used to go to the same school and started out in the sound system business together, making up our own little dubs, dub plates and what have you. I still played the flute for a while in those days."

Another one of your school friends was Blacker Dread.
Henry 'Matic Horns' Tenyue: "Yeah, he was one year up from me, but we became close friends still. He's going through a rough patch now (Blacker Dread was sentenced to two and a half years in prison for money laundering in June 2014, red.) but let's hope when he returns he'll be able to put that behind him and pick up where he left off, because over the years he's done a lot for the community of Brixton."

It wasn't until 2008 that you released an EP with your own material. Why did it take you that long?
Henry 'Matic Horns' Tenyue: "Well firstly I didn't really feel like releasing stuff myself; I wanted the distribution a good label could offer. Thing is that when you tell them it concerns an instrumental album, most of them aren't too interested anymore. It even took me a while to convince Gussie P and we go back a while, so that's saying something. Eventually he put one of my versions on the B-side of one of his releases and when people kept asking him about that tune, the penny finally dropped and he asked me to record what would become the '400 Years' EP (Gussie P Records, 2008, red.) and after that even the 'Musical Storm' double album (Gussie P Records, 2011, red.). Before that I had already recorded an album for Mike Brooks though ('Increase The Peace', Coptic Lion 2009, red.)."

Whenever I see you on stage, you always perform your reggae version of the theme tune to 'The Godfather'. When did you first start playing that?
Henry 'Matic Horns' Tenyue: "That was actually that recording I did for Gussie P I was just talking about. It was actually released as a B-side, but people loved it so much they kept asking him about it. Jah Shaka helped to promote it as it would feature in his sets regularly."

You already mentioned Don Drummond earlier; who were some of the other greats you looked up to?
Henry 'Matic Horns' Tenyue: "I guess I would have to name Vin Gordon and the great Rico Rodriguez of course, whom I always refer to as my godfather. 'Man From Wareika', the album he recorded for Island Records in 1976, is an absolute trombone classic! I never tried to copy anyone's style though."

Looking at your career, one could say you've done it all. What's left for Matic Horns?
Henry 'Matic Horns' Tenyue: "I recently started focusing more on the vocal side of things. In the past I already did a lot of harmonies and as people seem to like my voice, I think the time is right to explore that further."