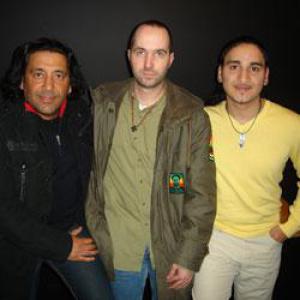 What's left for a musician who's already won just about every award and title out there? For Boban Markovic, Serbian master of the gypsy trumpet, the answer was simple: passing the torch on to his son Marko. The duo has been travelling the world with their energetic style of brass band music. When they recently halted for a concert at CC De Warande in Turnhout, we grabbed the chance to find out a little more about the family trade from Marko (Boban was suffering from fatigue and a sore throat on that night, so he gladly left the talking to his son, red.)

In the West-African griot tradition, music is taught from father to son; generations playing the same instrument. You're a father and a son playing the trumpet; does such a tradition exist in Romani families as well?
Marko Markovic: "It's not necessarily a tradition as such, but it happens a lot. Even though my father is a trumpet player, I didn't necessarily have to become one as well, but I had a feel for the instrument and since I wasn't doing that well in school, I decided to dedicate myself to my music. The region I come from in south-eastern Serbia (The Pčinja district, red.) is very well-known for the many musical families that live there. It's no general tradition with gypsies everywhere, but it's a tradition in that region of Serbia, yes."

Boban is one of Serbia's top trumpeters. Was it hard for you to step in your father's footsteps and take over as bandleader?
Marko Markovic: "Of course there was great pressure on me. I already felt that from the moment I joined my father's band. I had to overcome the same obstacles my father had faced at the beginning of his career with the added fact that my father is now considered to be one of the best trumpeters in the whole of Serbia. I will be very glad if I can even equal my father's achievements one day; at this point I wouldn't even dream of being better than him. There's a possibility that the famous Guca festival in Dragacevo will become a competition for the world's best trumpeter and it would be my ultimate goal to win that title one day."

The Guca festival isn't that well known yet over here in Belgium, so could you maybe tell us a little more about it?
Marko Markovic: "The Guca festival has been like a stepping stone for a lot of gypsy artists. If you are successful at Guca it can really give your career a boost. Boban is a great example; if he wouldn't have won all these awards at the Guca festival, he wouldn't be where he is today. It's hard to capture the whole Guca-vibe in words; you have to experience it for yourself really. Each year more and more people from all over the world are coming there. Along with the Exit festival (In Novi Sad, red.), which focuses on a totally different kind of music, it's the most important festival in Serbia. It is three days of non-stop music and good food like traditionally cooked lamb with cabbage."

Would you say your style is different to that of your father and if so, do you perhaps have different musical influences as well?
Marko Markovic: "My style was very similar to that of my father until I was about sixteen years old. In that period, my father was still teaching me a lot of techniques. When I felt I had developed enough as a trumpeter, I started combining jazz influences with the original gypsy arrangements from Serbia, Bulgaria and Romania."

Recently, under the influence of deejays like Shantel or, here in Belgium, Gaetano Fabri, gypsy music has really taken flight. Of course the western youngsters that listen to your music do not speak the Romani language. Does that matter or does the music speak for itself?
Marko Markovic: "Well, first of all, I did all the trumpet arrangements for Shantel's latest album ('Disko Partizani', red.). I really like the unique way in which he approaches gypsy music. Thanks to people like him, gypsy music is now reaching audiences it wouldn't reach otherwise. I think gypsy music is exactly the type of music where you don't necessarily need to understand the lyrics. It either grabs you or it doesn't."

The rise in popularity doesn't necessarily mean that gypsies are suddenly being treated better or discriminated less.
Marko Markovic: "(laughs) Sadly that's exactly true. Our music is more popular now, but most people treat us just as badly as they did before."

You also took your first steps in the world of cinema not too long ago, taking the lead role in the movie "Guca - Distant Trumpet" directed by Dusan Milic. How did you get involved in that project?
Marko Markovic: "It had always been a secret dream of mine to be in a movie or a documentary one day, but when they came to my house to offer me the role, I still thought I was part of a candid camera prank. (laughs) There were a couple of other guys that also tried out for the role, but apparently they really wanted someone who really lived the life of the main character in the story. It was a great experience and, maybe because of my stage experience, I didn't really suffer any camera shyness. I honestly never really felt I had to act, so I could just be myself."

A recent project that your father and you were involved in was 'Il Terrone, Il Hebreo e Il Zingaro' (the south-Italian, the Jew and the gypsy, red.), for which you collaborated with Roy Paci and Frank London. What was the idea behind that project?
Marko Markovic: "The original idea behind this project came from both Boban's and Roy Paci's management. We had already collaborated with Frank London in the past. The idea behind it was to unite three of the world's best trumpeters; Boban representing the east, Roy Paci the south and Frank London the west."

In conclusion, what does being Roma or gypsy mean to you?
Marko Markovic: "Roma is who and what I am. The word gypsy has a somewhat negative connotation for us, but that's how we're known throughout the world, so it's a cross we must bear. (laughs)"