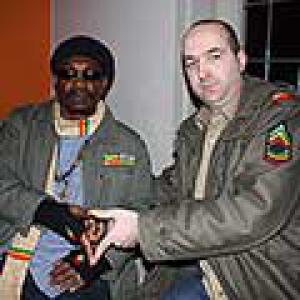 Mark, reading your biography, I noticed a lot of your musical influences come from outside the scope of reggae music.
Mark Wonder: "Well, in Jamaica folks have been feeding off American jazz, soul and r&b for as far as I can remember. Producers like the legendary Coxsone Dodd used to travel to the US and bring back loads of records; a lot of his early productions were either versions of these songs or compositions that were inspired by them. Just think of Bob Marley's 'One Love/People Get Ready' for example, which was a version of Curtis Mayfield's/The Impressions' 'People Get Ready'. My mother had a huge record collection - I don't even exactly know how she came by them - and I grew up listening to people like Al Green, Otis Redding, Sam Cook and so on."

Let me add one name, as it was from his stage name that you drew inspiration for your own. I'm of course talking about Stevie Wonder. What set him apart from all others?
Mark Wonder: "I remember discovering Stevie's music back in the nineteen seventies and was immediately blown away. It was as if this guy was on a planet of his own; the way he sung and the way he arranged his music, he was basically years ahead of his peers. Stevie could hit notes no one else could even attempt to hit. As he was my favorite artists I decided also to adopt the Wonder moniker."

You're also known as 'The Dragon Slayer'; what's the story behind that name?
Mark Wonder: "Let me quote His Imperial Majesty to answer that question: "…even in the 20th century with faith, courage and a just cause David will still beat Goliath.". That quote really summarizes what the 'Dragon Slayer' name is all about. Here I am as little David in this time battling Goliath which is Babylon. As a soldier of Jah army I duty is to praise Jah and be the voice of the voiceless. It's also the nickname of Saint George, who is the patron saint of Ethiopia."

'Dragon Slayer' was also the title of a project you were working on with Irie Ites from France. Is that album still going to be released?
Mark Wonder: "We actually already completed that album back in 2011, but for some reason they still haven't released it. I think it's a strong album and I've recently been in contact with Irie Ites again, so I'm hopeful it will still see the light."

In the beginning of your career you hooked up with a sound called Black Scorpio. How important would you say your involvement with them has been in your musical development?
Mark Wonder: "As a Rastaman I don't care too much about a career, but my connection with Black Scorpio started when I was still a youth aspiring to become a musician. I live in Marverly Kingston 20, which is the neighboring community to where Black Scorpio had their residence. Back in those days Black Scorpio was one of the most popular sound systems in Kingston. It's with them that I started doing my first recordings. Being the ones who helped me launch my musical mission, I can't but be thankful. That being said, before Black Scorpio, I was already involved with another sound called Black Stars, whose members included people like Brigadier Jerry and Tiger. When their careers started taking off, Black Stars kind off drifted apart and that's how I ended up with Black Scorpio."

At one stage your life almost took a completely different direction however, as a youth you got involved in horse racing and wanted to become a jockey.
Mark Wonder: "In the community where I grew up thoroughbred racing was hugely popular. I had friends who were jockeys and others were grooms. When they introduced me to that whole scene I really liked the vibe and being a man of short stature, it didn't seem too bad a way to escape from the ghetto. Unfortunately at the time the Jamaican Racing Commission had just tightened restrictions for becoming a jockey, so in the end I opted to walk the path of music instead."

As a Rastafarian you're a member of the tribe of Levi. What does that mean to Mark Wonder?
Mark Wonder: "Well, in biblical terms the Levites were tasked with priesthood. One of their tasks was keeping the tabernacle and the arc of the covenant safe."

Which brings us nicely to your new album, titled 'Scrolls Of The Levite'. What made you opt for that title?
Mark Wonder: "In 2009 I hooked up with Sikandar and Nando from Nowtime Sound, a small label and sound system in the San Francisco Bay Area in California. A few recordings quickly led to plans to do an entire album. The first title I came up with was 'Sun Of Levi', but looking at the lyrics, I decided the title should not be about me but about the content of the music, so I changed it to 'Scrolls Of The Levite'."

Why did you opt to walk the path of conscious music, when perhaps it would have been much easier to venture into dancehall?
Mark Wonder: "Well, as a Rastafarian my duty is to honor Jah and as a musician I do so by singing songs honoring His Imperial Majesty emperor Haile Selassie I. To me it was important to follow that tradition and be part of this movement. Yes, it would probably have been easier doing the odd slackness or gun tune now and again, but in all honesty I never entered this profession with the intention of becoming a star or make tons of money; I just love singing and wanted to record. That stance only intensified when Rastafari found me and my music became part of I&I livity. As a Rastafarian you start reflecting on things differently and hence you also start expressing yourself another way. Basically it's a spiritual journey of self-discovery. As a Rastafarian musician I feel it's I duty to keep an account of our history as black people taken from Africa to serve as slaves in the Caribbean and beyond. Feel free to compare it with the task of the griots in Africa. Apart from that it's all about peace, love and unity, or as Bob Marley used to sing it: "One love!". Following in the footsteps of my heroes - people like Bob Marley, Peter Tosh, The Abyssinians, The Congos and so on - what I&I do is survival music. I'm neither a preacher nor a prophet; I'm just a man doing what Rastafari inspires him to do."