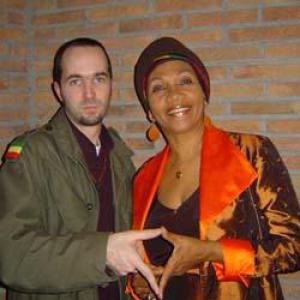 Marcia, thank you for taking the time to do this. First, I want to take you back to last February, the big memorial celebrations for Bob Marley's 60th birthday in Addis Ababa, Ethiopia. What was that like?
Marcia Griffiths: "It was very memorable! As you say, it was for Bob's 60th birthday and I'm happy it was held in Ethiopia because that's a place I know he loved very much. Believe me, it was a wonderful experience. We witnessed over half a million people celebrating in Meskal Square. Bob's spirit must truly have been there. All of his sons performed, everyone was there: Ziggy, Steven, Damian, Julian and Kymani."

Did you get the chance to visit any of the historical sites, because Ethiopia has a very rich history?
Marcia Griffiths: "Definitely! Our final performance was held in the Jubilee Palace of His Imperial Majesty. That was something else! It was like dream come true for me. We went to a few other places as well, but that performance in the palace was definitely the highlight. We got to see his throne and his bedroom, although they told us he hardly ever slept there. It was a beautiful experience."

How do you remember Bob?
Marcia Griffiths: "I will always remember Bob as the one and only prophet that was god sent to communicate God's message to the world through the power of reggae music. I say this without apology: "I truly know this man was sent by God!". That's exactly how I remember Bob, as a true prophet. His music was his life and there was nothing that came before that! I remember when we were in Zimbabwe to perform the independence concert. At one moment there were incidents, tear gas was fired and a panic erupted with everybody running all over the place. We (The I Threes, red.) ran away frightened by what was happening and eventually got back to the villa where we were staying. When Bob found us there, hiding away, he looked at us and said: "Now we know who are the real revolutionaries!". He just used one of his own lines on us and that made us feel so bad. He was not just a musician; he truly lived his own words. He was an exceptional person, unique, one of a kind! Even the little things he would say in daily life weren't like the words of an ordinary man. I used to look at him in amazement and wonder who he was and where he came from. I am very happy I knew him when he was alive. I always say that I'm happy I gave him flowers when he was still alive, meaning that I did know who he was! I usually say that if he would be in the busiest airport in the world, you would still notice him."

We also have to talk about the other Bob in your life, mister Bob Andy. How did you guys get together? Tell us that story.
Marcia Griffiths: "I met Bob Andy when I started singing. I must have been around twelve years old. He was still in a group called The Paragons then. They used to rehearse at a place near to where I was living and I loved to go there because I loved to sing. I used to go up to them and tell them: "I can sing too you know!". Sometimes they would give me the microphone and let me do a song. Later on I did a concert, I remember it was at Easter in 1964, and the morning after that they took me down to Studio 1 to meet Coxsone Dodd. There I met Bob, who was recording with the Paragons, again. He then started to write a song called 'Real Together' for me at the request of Sir Coxsone. He also wrote my first hit song 'Feel Like Jumping' and practically all the songs I did at Studio 1. 'Melody Life', 'Tell Me Now', 'Truly' and 'Mark My Words' were all written by Bob."

He's had a profound influence on your career then?
Marcia Griffiths: "Yes, very much so!"

If I were to compare Bob and yourself to a Jamaican version of Sonny & Cher, would you agree?
Marcia Griffiths: "Something similar yes, but I think our unity was stronger. We were very down to earth and Bob was always a very wise and knowledgeable person. He was very aware of all the things going on in the music business for example, so he was a very good guide for me."

You were very successful performing as a duo with Bob. The hit tune 'Young Gifted And Black' you sung here tonight together with your son, is still known worldwide. How did you then end up in the I Threes?
Marcia Griffiths: "The I Threes were formed in 1973, when I was doing some solo shows in Kingston. I invited Judy (Mowatt, red.) and Rita (Marley, red.) down to come and do the harmonies with me. I remember that at the end of one of the shows we decided to do some jam sessions of songs of the Sweet Inspirations, a group that was very popular in Jamaica at that time. The audience just loved it and some people said: "You guys sound so good together, you should form a group!", so we did and I came up with the name I Threes, like you would say: "We three". Incidentally at that exact same time Peter, Bunny and Bob were having differences and we came in just at the right time for Bob. Prior to that Rita and I had already done 'Rock It Baby' with Bob. After the I-threes were formed, the first songs we did with him were 'Natty Dread' and 'Jah Live' and Bob just loved us."

Did the I Threes ever release any albums of their own?
Marcia Griffiths: "Yes! We did two albums. The first was called 'The Beginning', produced by Tom Bell and the next one was 'I Threes Sing Bob Marley'."

It's high time for a re-release then because they've never been made available on CD.
Marcia Griffiths: "You're kidding?!"

Your biggest solo hit was one that even sprouted a whole new dance craze, especially in the States. I'm talking about 'Electric Boogie' of course. Tell us a little bit about that song.
Marcia Griffiths: "That was just a happy song written by Bunny Wailer and it turned out to be magic. It will never die. Bunny predicted that himself. The dance craze started in 1989. I was performing on the Reggae Sunsplash tour when Kiss Fm starting playing the song on the radio in Washington, D.C.. By the time I arrived there, it had already created a storm and I quickly had to learn the dance that was invented, called the Electric Slide, to perform it on stage. The song wasn't even in my regular repertoire you know! Right now that song is still being played in clubs, at parties and weddings; it's a magical tune!"

I want to talk to you about another Bunny Wailer song, my personal favorite, and that is 'Dreamland'. You just performed it here on stage tonight.
Marcia Griffiths: "I understand that that song wasn't originally written by Bunny; he deserves some of the credit because he opened our eyes to it, but I believe the original version was an American song. It's a beautiful song of course."

We can't forget talking about mister Beres Hammond. You guys seem to have an incredible chemistry going on stage, so much so even that when you see Marcia or Beres, you're automatically waiting for the other to appear. Who is Beres to you?
Marcia Griffiths: "Well, a lot of people say that, I don't know, he just brings out the best in me. We just spoke about Bob Andy; in the era of the sixties, my Studio 1 days, he was responsible for writing most of my songs. In this era it's Beres who writes most of my songs. We have something in common and on stage it's as you say, when people see Marcia, they expect Beres and vice versa. We compliment each other in a lot of ways. I love his melodies and the lyrics he gives me to sing. It's as if he has known me for years. There's definitely a spiritual connection there."

On your albums there's never solely reggae, but they always feature different styles of music.
Marcia Griffiths: "Yes, I don't put a label on music! When I was a little girl, I used to sing a song that went: "Music alone shall live under the sun.". We know we are blessed and chosen, because God has given us this talent to communicate to the world. I'm very blessed to be in this position. God called upon the singers and players of instruments. That is why I plea with all singers and musicians to put out a positive message. Music is not just entertainment. We have to bring the world good and positive music, to teach, educate and uplift. Music is purity and we have to keep it that way! Music never dies; it lives on from generation to generation. Take Bob Marley for example; his music and message still live on. Playing a Bob Marley song is like reading your Bible and it still relates to everything that is happening today. It shows us that music is a serious thing and should not just be taken for granted. We have the ability to change the world through music. Another example is Nelson Mandela. I have no doubt that it was music that helped to set him free. Everybody was singing songs to get Mandela released from prison and in the end it worked. It is word, sound and power!"