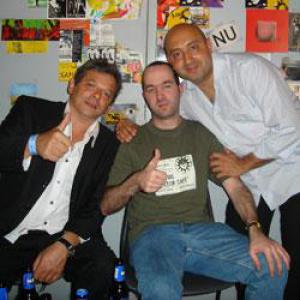 Mahala Rai Banda is still all too often seen as just Taraf de Haïdouks' kid brother, but that could change, because with their unique blend of taraf and brass band music, they're lifting Romanian gipsy music to a whole new level. We talked with Aurel Ionita, the driving force behind the band, and Michel Winter of Divano Production in Brussels, who also handles the bands management.

Aurel, Mahala Rai Banda means the noble band from the ghetto. Why did you choose that name exactly?
Aurel Ionita (violin and vocals): "There are a lot of connotations to that name both in Romanian as well as in Romani. Mahala is the name of the suburbs surrounding Bucharest, the ghetto where all the poor people live."

Several members of the band have their roots in the village of Clejani, a place that most amateurs of gipsy music already know as the hometown of Taraf de Haïdouks. The two bands are often compared, does that bother you?
Aurel Ionita: "We are the children of Taraf, so the comparison is a natural thing. My grandfather is a violinist with Taraf de Haïdouks and Neacsu (Nicolae Neacsu, violinist and vocalist with Taraf de Haïdouks. He passed away in 2002, red.) still gave me my first violin lessons and he also composed part of our most well-known tune 'Mahalageasca'. He was like a beacon to us, a very talented lautari (gipsy musician, red.) and very skilled at entertaining the crowd."

Is it a tradition in the gipsy community to pass on musical skills from father to son?
Aurel Ionita: "In the gipsy community it's really the clan, the family that decides. My grandfather was a violinist as well, but my father played the accordion. I was rather skinny and little as a child, so my family decided the accordion was just too big an instrument for me and they made me play the violin. Most of the time traditions that already exist within the family are carried on."

For Mahala you broke the mould in a way in uniting the violinists and accordionists from Clejani with the brass instruments of the Romanian army veterans. How did the project get started?
Aurel Ionita: "I already knew Michel (Winter, red.) and Stephane (Karo, red.), the promoters of Taraf de Haïdouks, and I already had some experience as a musician with Fanfare Ciocarla and Kocani Orkestar. I wondered if the world was really waiting for yet another fanfare or taraf and that's when I got the idea to combine the best of both. From the taraf I took the violins, the accordion and the cimbalom and from the fanfare the brass instruments."

Apart from uniting various musical styles, Mahala Rai Banda also groups musicians from very different age groups. The brass band musicians from the Romanian army are from a whole different generation than the much younger violinists and accordionists.
Aurel Ionita: "(laughs) yeah, that's not always easy and I always seem to end up in the middle when there's a conflict. Apart from the age gap, there's also the difference in provenance; the veterans are all country folk from Moldavia, while the others are urban youths from the outskirts of Bucharest. A little animosity isn't bad, though, it incites creativity and spirit when they have to play their music."

Gipsy music is often cheerful happy dance music. How important is the content of your songs? Is it important to understand what you guys are singing about?
Aurel Ionita: "Well, we do consider ourselves a bit as amateur poets. In general, our lyrics deal with subject from everyday life: a gipsy marrying a gadjo (Roma name for someone who is not of gipsy descent, literally: a civilian, red.), alcoholism, unemployment and so on."

With their movies, film makers like Tony Gatlif or Emir Kustorica have given the popularisation of gipsy culture quite a boost. How do you regard their work?
Aurel Ionita: "Their movies focus too much on a cliché image of gipsy life. If we're talking about Emir Kusturica in particular, my respect rather goes out to Goran Bregovic, who composed all the musical scores for his movies. His films catapulted Taraf into world fame and after them Fanfare Ciocarla and now Mahala followed suit. I'm convinced the musical cocktail Mahala brings, represents the future of gipsy music."

Let's stay in the world of movies just one question longer. Your song 'Mahalageasca' was used for the soundtrack of the movie "Borat: Cultural Learnings of America for Make Benefit Glorious Nation of Kazakhstan", a parody about a Kazakh journalist who travels to the United States. Doesn't it bother you that they use gipsy music to represent just about anything that comes out of Eastern Europe?
Aurel Ionita: "(laughs) And then to know, that the film was shot in great part in Romania. Sacha Baron Cohen, the director, who also played the role of Borat, has made some critical errors when working in Romania. He promised a lot of the local people money for appearing in the movie, but they never saw a penny."
Michel Winter: "What the music is concerned, I think Sacha used that music to give the movie a festive and exuberant vibe. You can criticize the movie on many fronts, but it's still a form of recognition for the music we do."

When you pass through Belgium, you often work together with deejay Gaetano Fabri. What is your take on the whole hype of remixing traditional gipsy music?
Aurel Ionita: "Doing it that way makes the music much more accessible for certain audiences. You can compare people like Shantel or Gaetano with designers who've created their own line of gipsy music. I'm not saying I'm into all their stuff, but I like what they're trying to do."

In conclusion, can you tell us in just a few words what Mahala Rai Banda represents?
Aurel Ionita: "Mahala is my job and my future. It's the pleasure of travel combined with a mix of other things."
Michel Winter: "Mahala Rai Banda is inspiration and it entails just about everything we talked about just now."