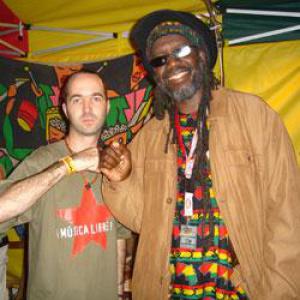 Blessings Macka B! Nice to have you back here at the Reggae Geel festival again. You used to be almost a regular here at the earlier editions of the festival. Does it have a special meaning for you?
Macka B: "Greetings! Blessed love, Rastafari! Yeah, this festival is nice; it brings the good people of Belgium, who are looking for positive vibes, together. It's a special place."

I know your name, Macka B, as a version of the Bible, but how did you come by it?
Macka B: "Well, my name is Macka - well that's what people used to call me from when I was still in school anyway (Macka B was born as  Christopher MacFarlane in the West Midlands town of Wolverhampton, England, near Birmingham, red.) - and when I was looking for a deejay-name, I was reading in the Bible and read about the Maccabees who were fighting against wickedness (The Maccabees were a Jewish national liberation movement that fought for and won independence, red.). That's when I said to myself: "That's what I want to do with my lyrics to: fight against wickedness and stand up for the rights of the people!", so I added the "B" and became Macka B. Also, in the Akan language of the Ashanti (inhabitants of Ghana, red.), it means "One who has had their say" and that's what I have to do; I have to have my say and speak the truth."

For the longest time, I believe up until the release of your last album 'Word, Sound & Power', you had a longstanding relationship with Mad Professor and Ariwa. What does he mean to you? What does he represent in the career of Macka B?
Macka B: "Mad Professor is a good person! He already wanted to link up with me when he saw me for the very first time in 1985. What I like about him is that he doesn't tell you to say this or not to say that; he knows that I speak from my heart. As you said, I did a lot of albums with him, but sometimes you have to take a break from something and spread your wings to discover what else is out there, but already I have a new album coming up that, again, was a collaboration with him."

On that last album, 'Word, Sound & Power', your music sounded much more Jamaican than the UK sound we were used to hear from you. Was that a conscious choice?
Macka B: "No not really. It all depends on the riddims that they give you and these ones just had a very Jamaican vibe to them, but I don't plan it that way."

You're also known as a devout Rastafarian. If I were to ask you: "What is the core of Rastafari for Macka B?" what would you say?
Macka B: "Rastafari is just life in its totality! It's a way of life, so everything that I do and say has to reflect that. We have to talk goodness and try to help people in selfless service. But Macka B isn't just talk alone; when I'm in the UK, I work with youths in my community. We have to try and show them that Rastafari means love and forwardness."

One thing that definitely stands out in your music is the humour in your lyrics. Is that something that is important to you?
Macka B: "Well, sometimes you try to keep it serious, but when it's too serious a lot of people will block it out and when they hear something that makes them laugh, they will take it to their heart. However sometimes you just have to be serious, you can't joke about everything, but humour definitely helps here and there."

I recently talked to some reggae musicians in the UK and they told me reggae music is really struggling there these days and that it's hard to make a living over there as a reggae artist. What are your views on that?
Macka B: "I wouldn't say the scene is dead yet. I still play there a lot and people still come to my concerts, but I think it's mainly the media who are trying to convince the people UK reggae is dead and who are bringing in Americanised stuff like r&b and hip hop. I think the reggae scene in England is still very much alive and even growing still."

This year marked the bicentennial of the abolition of slavery. Was that an important landmark for you and do you think enough attention was given to the anniversary by the Western countries?
Macka B: "I don't know... Mental slavery is still going on and there are still a lot of bad things happening in Africa as well. The West keeps robbing the continent of its riches. So to say slavery is over would be a lie, because it is still happening. We cannot only rejoice ourselves in the abolition of slavery but we also have to talk about reparations for those wrongs that have been committed. Actions speak louder than words!"

In your career you played almost everywhere in the world. Are there any places you particularly love playing at?
Macka B: "As a Rastafarian I love to play in Africa, but these European reggae festivals are very special as well, there are a lot of good positive vibrations out there! You only need one person to change another and that way you can change the world. Festivals like this one give me the opportunity to do that and that's why I like them."

That's a nice note to end on! I want to thank you for taking the time out to do this.
Macka B: "Blessed love!"