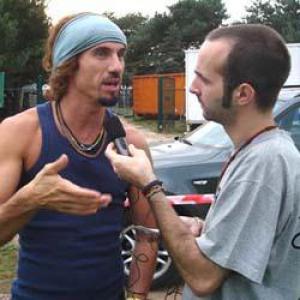 Dani, your nickname is 'el mono loco', the crazy monkey and your band is called Macaco (macaque, red.). Where did that whole fascination with monkeys come from?
Dani Carbonell: "That's something that started when I used to perform in the streets of Barcelona, the ramblas. To entertain the people passing, me and a African friend of mine, Chumo, mimicked monkeys. Soon after, people started to say: "Hey you look like a macaque you know!""

Doesn't the name have bad connotations? When we use the word "macaque" here in Belgium it's most often used as a racist slur to describe people from North Africa.
Dani Carbonell: "No, I never heard that before. That's typical for languages; something means this or that in one place and something totally different in another. In Spain "macaco" is used to describe one certain type of monkey, but in Brazil for example it just means "monkey"."

The mix of musical styles that Macaco brings and that is so typical for the region of Barcelona, the so-called música mestiza, is often compared to the music of Manu Chao. Is that something that bothers you?
Dani Carbonell: "We all laugh about those comparisons, because our music has nothing to do with what Manu Chao does. We were already playing this kind of music in Spain years before anybody had ever heard about Manu Chao. He's even from France, not from Spain so... He came to live in Barcelona and one day one or the other journalist started this story. My influences are Gato Pérez (born Javier Patricio Pérez, very famous rumbero from Barcelona, red.), Peret (born Pedro Pubill Calaf, one of the most significant players of the rumba Catalana, red.) if we are talking about the rumba Catalana and Ruben Bladez and Hector Lavoie if we are talking about the rumba Latina and even people like Bob Marley in reggae. My roots really lie in the rumba Catalana; that's the music I grew up with in my family. I came from the neighbourhood in Barcelona, called Gràcia, where the rumba Catalana was first played in the 1940s and I now live in an area called Raval (barrio del Portal, red.) that is also famous for this music. The rest of the musical influences in Macaco come from all over the world, because some musicians in the band are from South America and others are African. We basically take elements from other musical styles and give them our own personal twist."

One of the bands that already played here on the festival today, was a Belgian band called Think Of One. They also mix up a lot of different styles of music and they are from Antwerp which is also an international seaport like Barcelona. Do you think the fact that Barcelona or Antwerp are places where all these different nationalities came together for centuries played a role in the creation of the type of music you guys make?
Dani Carbonell: "Well, in my grandfather's time the area where I'm from in Barcelona was only populated by prostitutes, drug addicts and musicians. With the rise of tourism the government tore down a lot of buildings in the area and tried to modernise it to make it more attractive. Now the situation is a bit hypocritical because they try to sell the image of Barcelona as being a tolerant multicultural place, but you can't even play music on the streets anymore."

Your albums, 'Rumbo Submarino', but your newest 'Ingravitto' as well, are often inspired by writers, philosophers and thinkers. Do you read a lot and is that something that's important to you?
Dani Carbonell: "I read things that I like, I go to the movies a lot too and a lot of my friends are into comics. I like a lot of the old stuff though. I don't really want to create concept albums as such, but I like there to be a link between the different songs. For example in 'Rumbo Submarino' all songs have kind of an aquatic theme. Individually the songs are very different but they all have that same theme. Apart from that the album was also influenced by Jules Verne and by Narciso Monturiol, the Catalan guy who invented one of the earliest submarines (the Ictineo was built in 1856, red.). Now with 'Ingravitto', a word that I invented myself but that can be easily understood whatever language you speak, al the songs made me think of flying and weightlessness."

On the ring that you are wearing I see the same symbols, the crescent and the star, like on the sleeve of the new album. Most people would associate those symbols with Islam, but what's the connection with the album?
Dani Carbonell: "For me these symbols do not represent Islam, but all the people from the south, from the Mediterranean. A lot of people in the rumba Catalana and flamenco scene have this sign tattooed on their body somewhere. I've toured in Brazil recently and we went to a place called Canoa Quebrada and found they used the symbol as well. So for me it's certainly not a religious symbol. I respect all religions but my religion is my music."

You're from Barcelona, the capital of Catalonia, a region that is known for its struggle for more independence. What is your position in that regard?
Dani Carbonell: "I'm what they call a "charnego" (immigrant from another region of Spain, who resides in Catalonia but does not speak the Catalan language, red.), I'm a mix. I have family members who are from the north as well as family members who are from the south of Spain. I do speak Catalan, but I mix it with Spanish and I also think in Spanish. I respect their struggle, but I don't really care about frontiers or borders. I like Catalonia a lot and if they decide to become independent I will be happy for them. Just as long as I'm free to talk the language I prefer and do the music I love. I performed on a big festival on the beach a couple of months ago (Concerto por la paz, Concert for peace, Zurriola Beach, San Sebastian-Donostia, Spain, July 11th 2006, red.) together with Bob Dylan and Mikel Laboa. The organisers chose three acts that represented dialogue. I believe true understanding can only come through communication. In the case of the Basques for example, the new Spanish government is now opening the dialogue with ETA. You can not just ignore all the people that want independence; that simply doesn't work."

I listened to the new album on your website. Great site by the way.
Dani Carbonell: "Gracias."

In comparison with the previous albums it sounds and feels more introspective, quieter even. Was that what you were aiming for?
Dani Carbonell: "Not really, I think there are some upbeat songs on this album as well, 'Con La Mano Levantado' for example."

Maybe I should put it differently then. I had the impression that I heard you sing much more than on the previous albums.
Dani Carbonell: "Yes, that is true! After years of producing other bands - I also produce Ojos De Brujo for example - I learned how to leave unnecessary things behind in a song. Sometimes these things can blind a song. My motto is: "Less is more!" now and that is what I tried to do with this album. A song can be a lot like a woman. When you have a beautiful woman, a lot of make-up and jewellery won't necessarily make her more beautiful. I believe in simplicity, especially what music is concerned. For the first time I also used my own studio for this record. It allowed me to stay there as long as I wanted to work on those songs. In those long hours I added a lot but I stripped even more away. I tried to find the best words, the best melody and the fattest beat and really make these songs the best I could."

Dani, I want to thank you for taking the time out to do this.
Dani Carbonell: "Muchas gracias! Thank you a vosotros!"