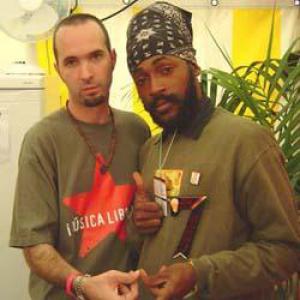 In Jamaica for every artist that has made the top about 100 others are lurking in the shadow, trying to steal his place and in that situation it's not always easy to keep up with who's hot and who's not. One of these young lions making his way to the top is Lutan Fyah. His debut album 'Dem No Know Demself' already proves his capacity and his recent association with Fatis Burell's Xterminator crew promises more to come for the future. I caught up with Lutan at the Reggae Sundance festival in Eindhoven for some Q&A.

Lutan, I read in your biography that you used to be quite a soccer fanatic before you started out in music.
Lutan Fyah: "Well, not really a fanatic, but I used to play the game. I was born with the talent to be able to play ball. I reached a certain level you might say, but music really lifted me to a higher level still. It's a calling to establish peace & love in the world. So, football is my past, music is my present and my future. Selassie I!"

Do you still support any teams or follow any players?
Lutan Fyah: "Yeah man, I support a lot of teams. I love the team from Amsterdam, Ajax. I know a lot of their players. And I love some of the big English teams like Arsenal and Manchester United. I have to watch them play on television though, because I can't go to the actual games."

I guess your love for soccer is something you have in common with Bob Marley. We saw him playing ball often enough.
Lutan Fyah: "Yeah, Bob Marley loved the game of football too, but I played it on a semi-professional level, not just for fun."

Let's talk a little bit about your 'Dem No Know Demself' album. I found it to be a very original album to be honest. There is even one track on there, 'The Youth Dem', where you even throw in a little bit of classical music. That was a first in reggae for me.
Lutan Fyah: "True true, Brotherman (Andreas Christophersen, red.) from Minor7flat5 in Germany created that tune."

If we talk about Rastafari, which philosophy do you adhere to?
Lutan Fyah: "I&I a Boboshanti! Marcus Garvey is the prophet, Emanuel, the priest, Selassie I the king and Empress Menen the mother of creation. But you see, we don't really want to separate ourselves from other Rastafarians, we are all one. Rasta means: "Haile Selassie I!"."

One man that offered you a big step forward in music, by letting you record your first single was Buju Banton. How did that come together?
Lutan Fyah: "Well, that was at the time when I had just decided I wanted to become a professional musician, so I went up to the studio. Buju immediately loved my inspiration and said: "The world will love this! Let's deal with it!", so he gave me the privilege to record that single."

Another name I have to mention is Jah Mason, because by taking you along on tour with him, he gave you another big push.
Lutan Fyah: "Yeah man, Jah Mason has always been a good friend. Even today Jah Mason keeps supporting Lutan Fyah and vice versa. I give thanks to every individual that gave I strength."

Today you are here with the Xterminator crew. Can we expect Fatis (Burell red.) to produce some new Lutan Fyah material in the near future, are there any plans for an album?
Lutan Fyah: "Yes, right now we have almost completed an album we did with the Xterminator family. There's a little more work to be done, but expect a Lutan Fyah Xterminator album very soon! ('Healthy Lifestyle' was released in 2006, red.)"

To conclude this interview I want to go back to where you started in music, which was by watching and listening to your grandfather's sound system.
Lutan Fyah: "It was just a part of me. The sound system was always there, so we danced and sung along to it. The microphone was in my hand constantly. I used to deejay too, select the music you know. Life for me is music."

I almost forgot to ask. Where does your stage name come from and what does it mean?
Lutan Fyah: "Lutan Fyah comes from Africa. "Lutan" is a Zulu word; it comes from South-Africa, Matabeleland, and means "love". The Fyah-part is the fire that comes from within I&I."