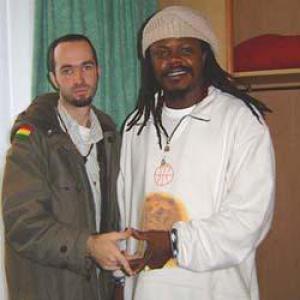 Luciano is often credited as the man who, in the early part of the nineties, singlehandedly put roots reggae back on the map, but who's the man behind the Messenger?

Messenger, I know that you consider Gambia to be like a second home. Can you elaborate a bit on that and explain what exactly your plans are over there?
Luciano: "My first visit to Gambia was soul stirring because I went to visit president Jammeh. It really revealed to me that my purpose lay in Africa. As a messenger I am out in the West doing my part, but I know that all arrows point back to Africa. As I talked with the president he told me that anytime I felt ready I could come over and set up base in Gambia. One of the main reasons for me to go to Gambia is my strong fan base over there.  When I was there my song 'One Way Ticket' was number one! That to me was a definite indication that I should come home. Also, when I tour in Europe, I meet more Gambians then any other African nationality. Those are all signs for me to look for my roots down there in Gambia."

Could you try to explain how Rastafari came into your life and where you see yourself fitting in the Rastafarian community?
Luciano: "I see myself as coming from the Twelve Tribes of Israel. I'm from the tribe of Dan. Once you are born you automatically become a member of a tribe. Every human being belongs to a tribe. What the Nyahbinghi Order is concerned; they are the ancient order of worship which, as a rastaman, I have to embrace. The Boboshanti Order is the high priest order, but I do not necessarily see myself wearing a turban. However I see myself as a high priest from the Order of Melchizedek. So I will wear my crown, my tam, which is knitted by a Rasta, and I will wear my African hats also. I want to liberate myself from any religious boundaries. I see myself as a liberated rastaman embracing all parts and all faiths of Rasta tradition but also embracing the Bible, Jesus Christ and His Imperial Majesty's teachings. I see Rasta as a true Nazarite in this time. A true rastaman must have a little bit of Christianity in him, a little bit of Twelve Tribe, a little bit of Nyahbinghi, and that is what the Messenger is. I am a little bit of all of that. I grew up in church, so I couldn't put aside my Christianity. When I read the Bible, Revelations Chapter 19 tells us about the one who comes with the name written upon his vesture: King of kings and Lord of lords. I see His Majesty fulfilling that prophecy. So I do not put up any barriers between myself and any order, because I consider myself to be part of all of them."

What does Ethiopia mean to you then?
Luciano: "I don't want to go into Ethiopia just like that. It is very spiritually and very timely to go there with royal splendour, because as a rastaman who has been taken into slavery and brought into the western hemisphere it is my duty to come back to the motherland with a certain amount of royalty. My music allows me all of this. If I were to be just a normal philosopher or a preacher or an evangelist, probably I wouldn't get the permission to enter places like Kenya or Tanzania, but as an artist I don't have a problem. I think it would be a privilege if we could enter Ethiopia to play at a festival and celebrate."

When and how did you discover your talent as a singer, your voice?
Luciano: "I grew up singing, because I grew up in church and I became very involved in the church choir. Then my father built me a guitar and this is where it all started, because with the guitar I discovered the power of music. I learned how to play the guitar myself and with that I discovered I could write and arrange my own songs. That gave me so much more ability to express myself. I grew up with the works of brother Dennis Brown, brother Bob Marley, brother Peter Tosh, brother Jimmy Cliff, Admiral Tibett, brother Beres Hammond; a very rich heritage in cultural singers. I managed to embrace the same teachings and try to depict the same image in my songs. To me music is like a ministry and I try to set up my own ministry, the Jah Messenger ministry, where a lot of youths are growing up in the same tradition and I try to teach them how to approach the music, how to write their songs, how to deal with their fans and to be respectful to others and so on. I think there is more spiritual value to music than business value. Business is one aspect, but when people can approach you and see an artist they can work with you have a lot more opportunities then were you to be an artist that is only interested in making money."

Is there any song that stands out for you or that holds a special meaning?
Luciano: "'It's Me Again Jah' is a very important song. It came to me at a very crucial time when I need to reconcile myself with God, when I realised that man can't do anything without the Spirit. And it's by this acknowledgement that I allowed the Spirit to take full control of my life to make my will harmonious with his will. After that all my achievements and my goals became so natural to me. I am not doing it on my own, you understand? I'm doing it with the spirit of the Almighty behind me, with the power of the universe and with other people who believe in righteousness, roots and culture, who believe in reality."

As a rastaman do you uphold the ital way of living and, if so, is it hard to uphold when you're on tour?
Luciano: "Ital living is very crucial. I've been a strict vegetarian for about five to seven years now, but I've added a little fish to my diet. It's easy to uphold on the road because everywhere you go you can easily find fresh vegetables and fruits and God provides for his children. What the fish is concerned; I will not eat fish from every fish market you know because some people will catch fish from any dirty gutter or any river. (laughs) But there are certain places like in the Caribbean or in Africa, where they have the Indian Ocean to catch good fresh fish. Even in Europe there are some places where you can get good salmon for example. I feel that for a person who is very active there is nothing wrong with adding a little fish to your diet; it provides you with a lot of calcium. And we mustn't forget it was Christ himself who blessed the fishes."

One of your most recent albums is called 'Serious Times' and you sing: "serious times call for serious measures", which couldn't be more appropriate than today. Where do you see the role for the rastaman in these times?
Luciano: "The rastaman, and then I mean the spiritual rastaman who is in touch with his roots and his natural mystical way of living, will stand out more than ever because people right now are in need of spiritual strength. People need encouragement, they need spiritual food. And even if it is dancehall vibes that are in the spotlight right now, we need to help people with facing reality, to get to grips with daily life; like paying bills or raising their children and re-evaluating their spiritual values.  ‘Serious Times' also talks about the atrocities going on in the world right now: people killing one another, war that is escalating all over the globe... So there is a need now for a serious message to address these political and social issues.  The 'Serious Times' album is very fitting in these times. It was produced by Dean Fraser, so I must give him some of the merits to."

In closure can I give you some names and you just tell us what they mean to you?
Luciano: "Please go ahead."

The first one then, logically, being: Dean Fraser?
Luciano: "Mister Dean Fraser is a hardworking maestro. He's a living legend and we are blessed to have him as our bandleader. I'm very honoured to have him as my musical director. We shouldn't wait until a brother has deceased or moved on to a higher plain before we give him his trough honours. He is a living legend among us right now!"

Your brother: Mikey General?
Luciano: "Mikey General is my "compañero", a spiritual inspiration. He is a good friend, a clean-hearted messenger. He's not on this tour because he had his own personal musical ambitions and I couldn't fight him on that. I miss him greatly, but I think it's only fair that he gets his chance to do his own thing. He's a very good brother, very good artist, very prolific and a very serious and dedicated man. I think if the world would pay a little more attention to Mikey General, there is a lot to be learned from his work."

Bob Marley?
Luciano: "Brother Bob Marley is my mentor, a real freedom fighter who paved the way or laid the foundations for us. I continue to see him as a light. Even after his transition he is still among us as an example that we should try to follow."

Marcus Garvey?
Luciano: "Marcus Garvey is the true visionary and messiah for the African nation. He appointed us, the African race, as the engine of humanity, as valuable, not as captive slaves but as kings and queens who had been taken into a lifestyle that is against the will of God. He showed us to find our way back home to Mama Africa. He continues to be a light and inspiration for the African nation worldwide."

And finally then: His Imperial Majesty?
Luciano: "His Imperial Majesty is Christ in his kingly character. I&I as a messenger embrace him as the comforter in the second appearance. I see Jesus Christ as the first appearance of the redeeming lamb and His Majesty as the defending lion. I will always hail and respect His Majesty as a bearer of the light and a defender of the Christian faith. He is without a doubt a deliver and defender of I&I, the people who have been through suffering and strife. He is the defender of the faith!"

Rastafari! Any final words you want to share with the youths reading this interview?
Luciano: "I just want to encourage the youths to be true, to themselves as well as to others. Respect your elders, respect tradition and respect your ancestry. Know your identity and know your history, because once you know your history, you'll be able to carve out or chart your destiny. Be respectful to authority and try to maintain the true values of life!"