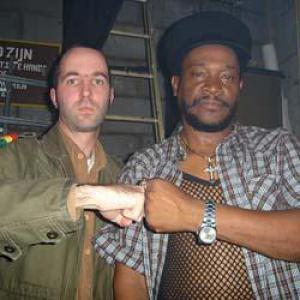 Ranger, everybody knows the name 'Lone Ranger' from that legendary TV western show, but how did you come by it?
Lone Ranger: "Back in those days most deejays had cowboy names. One night I was deejaying and I introduced a tune with the words: "Right now this one badder than Dillinger, tougher than Eastwood! My name is the Lone Ranger, that's why I act like a stranger!". It just came out like that and from that time the name stuck with me."

Why is it that the influence of those gangster and western movies was so big on the deejay scene at that time?
Lone Ranger: "Because that were the only type of movies we got to see in Jamaica, a lot of western movies."

One of your biggest hits 'Barnabas Collins' was also based on a TV show, but one that we here in Europe might not remember. Can you explain where it came from?
Lone Ranger: ""Dark Shadows" (ABC daytime serial which aired from 1966 to 1971, red.) was one of my favourite TV shows. It was on every night around 8 or 9 o'clock and we would all gather together and watch it. It was a family thing you know."

And what was the show about?
Lone Ranger: "(laughs) It was about the adventures of a vampire."

One of your first recordings, or even the first recording, you did at Studio 1. How do you remember those days and Sir Coxsone more particularly?
Lone Ranger: "My first recording at Studio 1 was a tune called 'The Answer'. I remember Mr. Dodd as... (thinks) It was like a family camp you know. Whether you worked or not you got a salary. It's sad to say he has passed away now. He's missed by many."

Is Coxsone the producer you liked working with best or is there someone else that you really loved working with more?
Lone Ranger: "Well my first producer was Chester (points at Chester Synmoie sitting across the table). We were in a group called The Ifenders. I was the lead singer and Chester did harmonies. In those days I sang and deejayed at the same time, but Chester preferred my talents as a deejay so I started focusing on being a deejay and Chester took care of the business side of things."

Your life story is a bit the opposite way around as that of most Jamaicans. Instead of emigrating from the island you lived in England and only went back to Jamaica at a later age. What's the story there?
Lone Ranger: "My mother was an English citizen. When I was 5 years old, my mother sent for me and my brother and we went to live in England. But then in the early seventies the racial tensions between blacks and whites became so high she decided to move back home."

One of your biggest tunes is of course 'M-16', you opened your set with it here tonight, but what on earth made you write a song about a gun?
Lone Ranger: "(laughs) Back in the beginning of the eighties Jamaica saw one of the most violent election campaigns ever. You literally saw guns everywhere. It was an election of war. That's how that song came to be. At that time I was deejaying for a sound called Virgo. Now when you are deejaying on a rub-a-dub soundsystem, you actually make up the lyrics while you are doing it. It's like poetry and that's also how the song originated."

Your career started when the philosophy of Rastafari became more influential. Did some of that rub of on you?
Lone Ranger: "Yeah man! I&I a Rastafarian. I give thanks and praise Jah every time!"

Last question then. What is Lone Ranger up to these days? Is there some new material we should be looking out for?
Lone Ranger: "Well, right now I have a brand new single out there called '(A Message To You) Rudie' (12" T.I.M.E.C. TIMEC091, 2006-03-29, red.), a duet with Carlton Livingston. The original was by Dandy Livingston, but we took it and gave it a bit of a reggae update. Wicked tune!"