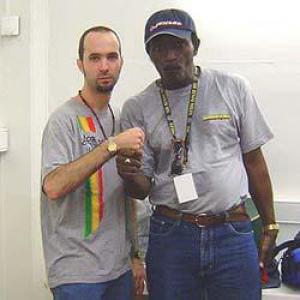 Lloyd, you're renowned as a bass player, but you got really famous when you started touring as the bandleader of the We The People Band with Dennis Brown. I want to talk more about him in a little bit, but you really started as a singer.
Lloyd Parks: "Definitely so!"

How did you start out? With what band was that?
Lloyd Parks: "I started out in a band called R.H.D. Invincibles in Kingston, then moved on to a band called Skin Flesh and Bones where I used to play bass and Sly Dunbar played the drums. That band then shattered, so I decided to do something I always wanted to do which was to form a band of my own and that's how everything got started. Before that, if you want to know about the period when I was a singer, I used to sing with a band called The Termites at Studio 1. At that time I was just 18 years old. I then joined a group called The Techniques for a short while. On the side I practiced my instrument and developed my skills."

How did things evolve then in a way that you started to sing less and less and started to focus on the bass?
Lloyd Parks: "(laughs) That was just something that was in me, an inborn thing, and I just let it out. Before I played the bass I even played the guitar for a while. One time the bass player of the band I was in at that time didn't show up and I told the bandleader I could play the bass too. That night I tore the place down! It was the first night I played! So, I never stopped since!"

Your style is quite unique; one can easily tell it apart from the styles of the other bass players in Jamaica. What would you say makes you different from the others?
Lloyd Parks: "Well, I've been told a lot that I have a unique style. I know that too now. I just like to be innovative and try to do things differently. If you hear my bass you will know it. I played for a great number of artists and always with great success. I played songs for U Roy, Ken Booth, Dennis Brown, John Holt, you name it!"

You must have met them all!
Lloyd Parks: "Yeah man!"

Let's go back to Dennis Brown then. How did you get together and how do you look back on that period?
Lloyd Parks: "I really started out with Dennis Brown when I was still with Skin Flesh and Bones. There was a hit song called 'Here I Am Baby, Come And Take Me', it was an Al Green song, but I changed it to reggae. That was a success and then there was a tour to England, where Dennis was playing for the first time with Al Brown and Toots & The Maytals. I found him a very interesting artist and I liked backing him. We were locked. There was a great togetherness between myself and Dennis and we ended up working together for over 20 years. I backed various other artists as well, but whenever Dennis moved, I was there!"

And how do you remember Dennis as a person?
Lloyd Parks: "You could never see Dennis Brown as a vex person. He was always smiling, a very easy person to work and to get on with. He's sadly missed."

The We The People Band is still what you call a full band including a horn section and everything. In the eighties Jamaican music was confronted with the introduction of the keyboard, synthesizer and later on even the digitalization of music. How do you look at all these evolutions?
Lloyd Parks: "The difference with Lloyd Parks & We The People Band is that no matter what style or fashion is in, we are always a full band because we deal with the original stuff, the real authentic music. To continue on that journey you need a full band."

Does that also apply when you record in a studio?
Lloyd Parks: "If a song calls for a horn section, then you have to do it. Sometimes it's not necessary. Like when you have got a singer with a strong voice, someone that can empower the song."

How does it feel to be on the road again now?
Lloyd Parks: "It's a nice feeling. I haven't been touring Europe for quite a while. The people really welcome me, so it's a great pleasure."

I found one CD album of yours, 'Wonder Of You', but in general Lloyd Parks material seems to be hard to come by. Can we look forward to some new recordings?
Lloyd Parks: "Yes man! Actually I have a new CD out which was released in December of 2004, called 'Lloyd Parks Collection'. It compiles about 20 of my songs. For people who want more information, my phone number in Jamaica is 876/92999163. Just phone me for any Lloyd Parks stuff you want! (laughs)"

You've been around for so long, played with so many artists, that you must have developed an eye for spotting talent. In today's reggae scene who would you put forward as an artist that could go far, that could carry things?
Lloyd Parks: "Right now I'm looking at Sizzla. He's got the strength and does what he wants to do. He's a great artist."

To end this interview, maybe a few words of wisdom for the people who are going to read it?
Lloyd Parks: "I can say one thing and that is that I really love you all. Belgium, I like how you received us! I'll be coming back here, look forward to that. One love Belgium!"