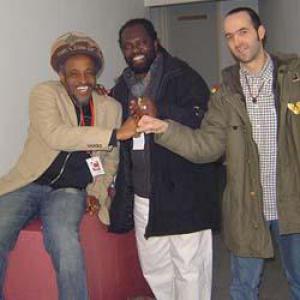 Little Roy, why is it we see and hear so little of you?
Little Roy: "It seems like a conspiracy in the music business. I've written so many great songs, but the credit has always been taken by other people acting as if it was their own."

The story goes that you got your name from the great Prince Buster, but why did he give you that name? Why Little Roy?
Little Roy: "I have always been of small stature and that was his way to describe me. The ‘Roy' part is because he saw that I was a ‘royal' youth, an upstanding person."

It was a song with a Rasta message, so you must have involved yourself pretty early with the Rastafarian philosophy. How did Rastafari find you?
Little Roy: "I grew up in a Christian home. My mother used to go to church a lot and I went along and even sang in the church choir. That was my spiritual background so to speak. At the age of 13 I started reading my Bible a lot and then, from sitting in with brethren of the faith, especially one brother called Desmond Martin, I started to reason and he showed me things. The youths back then didn't want to turn to the church because it had little to offer. I & I spirit led I to Rastafari and I've been holding onto that faith for nearly 40 years now. It really upheld me! If you can live by the principals of Rastafari, that's a great thing you know."

In your long career you've worked with about every great producer; you knocked on the door at Studio 1, you've worked with Prince Buster, with Lee Perry. Who was the one that stuck in your heart?
Little Roy: "Well, for me that's Matador, because he produced my first number one, 'Bongo Nyah' and I treasure that. I was only sixteen at the time and still going to school."

One song we can't leave out talking about is of course 'Tribal War', a song that was covered by so many artists over the years. It must hold a special place in your heart too?
Little Roy: "Yes! That's a great song! That song was released on my own Tafari label, but a lot of producers in those days exploited their artists and thinking this or that singer would never make it on an international level anyway, they replaced the name of the artist with their own on international pressings. That's one of the reasons why you find so little Little Roy material. All of my great songs are credited to other people. When I went to Jamaica recently, to perform in the Heineken Star Tour, when I was on stage singing my tunes, I saw the audience wondering why I was singing these great hit songs from other artists! I've been away from Jamaica for a long time now. I moved to the US in 1982 and after that came to London."

I guess one of the songs you are talking about would be 'Prophesy'. That was made hugely popular again by Freddie McGregor just a couple of years ago.
Little Roy: "Yes, exactly. It re-launched my career, but Freddie also put his name under the credits, so you see nobody is free from blame."

What can we expect in the near future? Is there some new Little Roy material being released?
Little Roy: "Yes, at the moment I've got a new album called 'Children Of The Most High' (Pharos, 2006, red.). So far it's doing great; go look for it because it has some serious messages on it and good songs!"

In conclusion, I would like to give you some words and you just respond by telling us what they mean to you. Let's start with your home country: Jamaica?
Little Roy: "Jamaica is my place of birth, there where my navel string was cut. But since then my life has become more international. It stays in my heart though."

Music?
Little Roy: "Music is an everyday thing to me. I still write and sing, so it's a continuous living thing to me."