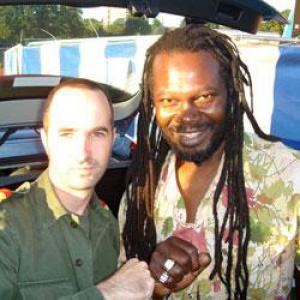 In 2006, after participating in the BBC 2 show Dragon's Den, Levi Roots changed from being a local South-London roots singer into a national celebrity with his Reggae Reggae Sauce. Meanwhile the sauce is distributed in all Sainsbury outlets in the U.K., there's a Reggae Reggae Sauce website and even a Reggae Reggae Sauce song and video. We met up with the Rasta entrepreneur at his home base in Brixton and asked him about the secret ingredients in his recipe:

Levi, blessings! The Reggae Reggae sauce phenomenon, live in Brixton! I still saw you on television just last night in a follow-up on Dragon's Den (Dragons' Den is a television programme, aired on BBC 2, that originated in Japan. The format consists of entrepreneurs pitching their ideas to secure investment finance from business experts - the "Dragons". The contestants are people who have what they consider to be a viable and potentially very profitable business idea, but who lack funding, red.) called "Where Are They Now", so I'll open with the same question: "Where are you now in your whole Reggae Reggae Sauce adventure?"
Levi Roots: "I'm right here still! (laughs) I haven't gone anywhere. The only thing that happened since Dragon's Den is that we've been exposed to more people. But Reggae Reggae Sauce has always been a phenomenon ever since I started it fifteen years ago at the (Notting Hill, red.) carnival. Everybody who tasted it knew it was going to be a success; it was just a matter of fighting the dragons we are faced with in the system every day. I was lucky enough that Rastafari blessed me and chose five dragons for me to slay in order to get my product on the streets."

Why did you call it Reggae Reggae Sauce? Why not simply give it your own name for example?
Levi Roots: "I always try to teach people to be positive and not to step away from the things they are closest to and know most about. I've been doing reggae music for thirty years now; music is in my blood, it's what I love the most, so when I went in the sauce business there was no way I was going to leave that behind. The most sensible thing was to try and merge the two together. By calling it Reggae Reggae Sauce I directed all the knowledge I gained on stage and all the fans of my music towards this new product. That was really the only way to go for me."

You're still performing. Is it easy to combine these two career paths?
Levi Roots: "Well yeah, it's quite easy. As I just said, music was my first love, but I always liked cooking and it's so great that I managed to put the two together now. Wherever I am with the sauce, my music is there also. The great thing about the Reggae Reggae Sauce song is it will always be selling the sauce and Levi Roots will always be singing it."

It's a jerk sauce. We don't really have a large Caribbean community, so could you explain shortly what jerk is exactly?
Levi Roots: "Jerk is an old-time Jamaican word that is derived from Spanish and means "smoked". It means smoking your food. That tradition goes back to the slavery time when slaves weren't allowed to cook whenever they wanted to, so they devised a way they could do it without the slave master knowing. What they did was dig a hole in the ground, light a fire in that pit, put the meat on top, cover it up again and let the smoke do its work, in a way creating a sort of natural oven. Reggae Reggae Sauce I what we call an all-purpose sauce; you can use it as a marinade, as a dip or just as a normal table sauce. It's the first Jamaican super sauce! It's very versatile."

The success here in the UK has been huge. Any plans to cross the Channel and conquer the rest of Europe as well?
Levi Roots: "Yes, absolutely! As I said before, when you see Levi, the music will always come first. In Belgium I played the Reggae Geel festival a couple of times. The public always received my music with a lot of enthusiasm, so of course I can't wait now to introduce them to the sauce as well. I'm sure everybody will love it just as they did over here. After I slew the dragons on TV and the sauce hit the shops, nobody had tasted it yet, so it was not only the taste or quality that was selling the sauce, it was also Levi Roots and the whole marketing strategy that's behind it. But the sauce is great of course; once the people tasted it, they liked it and I'm sure it will be the same in Europe."

In starting this enterprise, you also had to enter the world of corporate business. How do you deal with that, being a Rastafarian?
Levi Roots: "It's something I always prepared myself for. The thirty years I've been in the music business have kind of prepared me for this, so I can deal with these people on their level and still retain my dignity as a Rastaman. The most powerful man on this earth is the Rastaman because he has more knowledge; so even though these people might have more money than me, they don't have more knowledge. I have performed all over the world, where you're with thousands of people all under the same banner of music. These five dragons never had that experience. When I talk about connecting with people, they listen to me and when they talk business, I listen to them. I'm here to learn from them and pass on the Rastafari message to them."

What's still in store in the near future? I read somewhere you were working on a cookbook now.
Levi Roots: "It's never been just the sauce; it's the whole Levi Roots Reggae Reggae brand. We've got all types of products in the pipeline: there's going to be four flavours of the sauce and we've got the Reggae Reggae Cookbook coming. (laughs) As long as it is food-related, we can really do anything with the brand."