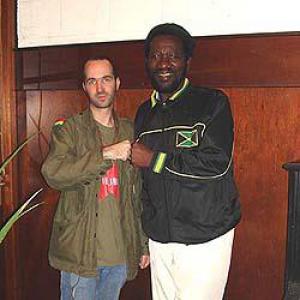 Leroy, if we go all the way back to your beginnings in the music business, the name Alton Ellis pops up.
Leroy Brown: "Yeah, Alton Ellis encouraged me when I was still singing in Trenchtown as a little boy. He acknowledged my talent and told me that he would help to develop it to the best of his abilities and so he did. From there I started to develop my own career. I moved to the east of Kingston, to Rollington Town, and that's where I met Family Man and his brother Carlton Barrett (Aston 'Family Man' and Carlton Barrett, bass player and drummer in Bob Marley's Wailers, red.). We all got involved in a group called The Hippy Boys, which also included Max Romeo, Milton Henry and Robbie Shakespeare. It was like a big family. Quite a few guys passed through that band. Later a band called The Emotions developed out of that."

It was also with those two bands that you started recording for Sonia Pottinger, the first female producer in Jamaica. Could you tell us what made the difference in working for a female instead of a male producer?
Leroy Brown: "Well, she had the knowledge about what she was doing and a feel for good singing and good harmonies. She produced a good number of hit songs, including one of my songs called 'Dr. No Go'."

Your nickname is 'Artist'. Does that just reflect to you being a singer?
Leroy Brown: "No, I used to draw a lot. I'm a real artist. I used to make a living of that, doing a lot of graphics and portraits."

At one point you left for Canada. What was the main reason for that move?
Leroy Brown: "My elder brother was living in Canada, doing well as a welder. He figured that if I came over to Canada as a student, it would be an opportunity for me to excel both in music and in the arts. He wasn't wrong."

There's been a re-release now of your legendary 'Color Barrier' album on the French Makasound label. Did that re-release mean a lot for you? Did it reopen some doors that might have been shut for some years?
Leroy Brown: "Yes! It opened many many doors. I have to credit Makasound for this. They did an excellent job with the packaging and the selection of the songs. I really think it's a success because I get a lot of e-mails from all over the world and whenever I perform now, it makes all the difference to people who never knew me before."

I had a look at your new album, 'Genuine Love', and noticed that you are one of those artists that takes care of all his own business; you have your own label and so on. Is that feel of independence something that is quite important to you?
Leroy Brown: "Yes, I've been producing myself for years and years. My main co-producer is really Robbie Shakespeare, because we go way back. He helped me to produce this latest album as well."

He was already there when you recorded the 'Color Barrier' album too, right?
Leroy Brown: "Right! We did three different versions of the song 'Color Barrier'. The first version was done in Canada and then we went to Jamaica where we re-recorded it in three different studios: Treasure Isle, Channel One and King Tubby's where I voiced the track and Tubby mixed it."

On the album 'Color Barrier' and 'Money Barrier' sound very similar. Is the one just a version of the other?
Leroy Brown: "No, we were discussing the lyrics of 'Color Barrier' one night, when Skully (Noel 'Skully' Simms, legendary percussionist and now a member of Jamaica All Stars, red.) and Alton and I were going to the studio and he said: "It's not colour that is the problem, it is money!" I got a vibe from that remark and when I got to Harry J studio the same night, I reworked it."