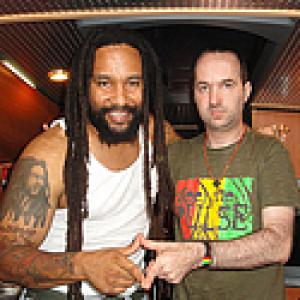 Ky-Mani, before you started out in music, you had a career going as a sportsman. What made you switch gears?
Ky-Mani Marley: "Well, to be honest I cannot remember ever having the intention to go into the music business. I never saw myself on stage as my dreams lay on the football field. My music career is something that almost happened involuntarily. I started out just deejaying every so often and people kept coming up to me complementing me on my vocal skills, but even at the time when my first album was released ('Like Father Like Son', Rhino, 1996, red.), I still hadn't made a conscious decision to redirect my focus towards music."

You've never strictly confined yourself to the reggae genre.
Ky-Mani Marley: "It's music in general that inspires me. There are numerous songs that I love but don't have a clue about who they are by. Being raised in the US in very multicultural society, I was exposed to a lot of different genres of music growing up. When I first moved to the US I listened to a lot of soft-rock, bands like Bon Jovi, Guns N' Roses and, this might surprise you, my favorite artist, George Michael! (laughs) In my own music I try to incorporate everything that I gravitate towards myself."

We don't have to look too far to see what you inherited of your father, but which elements in your character do you think you've inherited from your mother (Jamaican table tennis champion, Anita Belnavis, red.)?
Ky-Mani Marley: "My mother was an athlete, so definitely my athletic abilities. I was raised by my mother, so I think I've also inherited my revolutionary side and my way of thinking from her. Instead of reading me fairytales about Red Riding Hood or Snow White, she taught me about people like Che Guevara, Steven Biko, Nelson Mandela, Fidel Castro and so on to prepare me for the real world out there."

Starring in movies like "Shottas" and "One Love" you've also made name as an actor. How exactly did you get involved in the movie business?
Ky-Mani Marley: "I'm someone who roles with the punches he's dealt and once again, I sort of rolled into it. I was given the opportunity to star in "One Love" and growing up looking up to those great heroes of the silver screen, that was something I was not about to turn down. I quickly found out it wasn't as easy as it looked, certainly not when you want to try and portray a character in a convincing way, but I love a challenge, so I stuck with it."

For a while there was talk of a sequel to "Shottas". Is that still in the pipeline?
Ky-Mani Marley: "We've been trying to get that sequel going for some time now and hopefully it will soon manifest. There still are some obstacles to sort out though."

In 2012 a wonderful documentary about your father's life was released ("Marley", Kevin MacDonald, red.). You were barely five years old when he passed away. Did the documentary teach you something about him you didn't know yet?
Ky-Mani Marley: "As a matter of fact it did, yes. There were a few things in there that I didn't know firsthand. We are a big family and personally I always welcome anyone who can tell me a story about my dad. Over the years I've amassed a great number of these kinds of stories told to me by my grandmother, my mother, my brothers and so on. "Marley" is a brilliant documentary though."

Were you raised a Rastafarian or did that only manifest later on in your life?
Ky-Mani Marley: "Rastafari has been a part of me ever since I was born. Since my father was a Rastafarian as well, I've always been under that umbrella so to speak. The misconception about Rastafarianism is that many people still take it for a religion, when in fact it's just a way of life. Religion is built upon rules, rituals and regulations, but if you want to live like a Rastafarian you have to follow what your heart and soul, your inner voice, tells you. Unfortunately you've got people pretending to be Rastafarian, but really bending and shaping it to what they believe it should be. Rastafarianism shouldn't be overcomplicated; it's as simple as love is. Rasta is not about complexion, race or creed, it's about one love, living together in unity!"