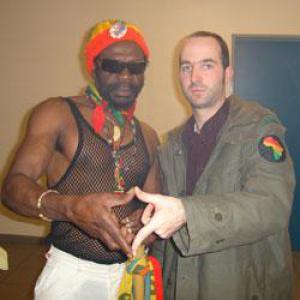 You also mentioned the name of Zere Yacob on stage. He's the grandson of Emperor Haile Selassie and the heir to the throne of Ethiopia, but what does he represent to you as a Rastafarian?
King Kong: "He can be anything you perceive him to be. How you see him; that will be the glory you will get. But you have to read! I was a youth that couldn't read and I only learned it when I was already in my thirties. They told me I had something called dyslexia. I went to prison in England and there I asked the Father to teach I to read. I learned and went back to school to get a business degree and I eventually got a master in business administration. I also discovered that Jesus Christ and Selassie are the same. When Abraham met Melchizedek (Melchizedek's name can be translated either as "Zedek is my king" or as "My king is righteous". The former, which treats Zedek as a proper noun, is the translation favoured by most biblical scholars and refers to a Canaanite deity with that name. In Genesis, Melchizedek is also referred to as king of Salem - generally believed to be ancient Jerusalem - and priest of El Elyon. Though traditionally El-Elyon is translated as "most high God", and interpreted as a reference to Yahweh or El, other scholars believe that it refers to Zedek - regarding El Elyon as referring to the most high god, and using Melchizedek's name as the indicator of who the deity was. In the Tanakh or Hebrew Bible, Melchizedek brought bread and wine to Abraham after Abraham's victory over the four kings, led by Chedorlaomer, who had besieged Sodom and Gomorrah and had taken Abraham's nephew Lot prisoner. Melchizedek is also described as blessing Abraham in the name of El Elyon it was the same thing; just a different time and different flesh, red.)  I knew that even before I became a member of the Twelve Tribes of Israel. I'll go even further; it was that knowledge that made me recognize the Twelve Tribes as the right path for me. In prison I read the Bible in its entirety just because there simply wasn't anything else to do."

Have you had the chance to go to Ethiopia yet?
King Kong: "No, I'm still on the journey to reaching it. I will be there soon though, because I would like to be there for the millennium celebrations coming September (The Ethiopian calendar or Ethiopic calendar is the principal calendar used in Ethiopia and is also the liturgical year of the Eritrean Orthodox Tewahdo Church where it is known as the Ge'ez calendar. It is based on the older Alexandrian or Coptic calendar. Like the Coptic calendar, the Ethiopian calendar has twelve months of 30 days each plus five or six epagomenal days, usually called a thirteenth month. Furthermore, its months begin on the same days as those of the Coptic calendar, but they have different names, that are in Ge'ez. The current year according to the Ethiopian calendar is 1999. Enkutatash is the word for the Ethiopian New Year in the official language of Ethiopia: Amharic, while it is called Ri'se Awde Amet - Head Anniversary - in Ge'ez in Eritrea. It occurs on September 11 in the Gregorian calendar, except for leap years when it occurs on September 12, red.). The Ethiopians also have the oldest version of the Bible. All versions are more or less the same but the Ethiopian version contains more stories."

I can't leave out asking you where you got your name. Apparently your father already called you Jr. Kong.
King Kong: "Well not really my father, but some of my friends and brethren started to call me Jr. Kong because at that time my father was known as King Kong. After a while they started to call me King Kong too and I carried that name ever since I was about ten years old."

How do you feel about that name now, because it is of course still best known as the name of that gigantic ape from the movies?
King Kong: "(laughs) Yeah, I saw the movie just recently; it was the new version though, I still have to see the original (King Kong, directors Merian C. Cooper & Ernest B. Schoedsack, 1933, red.). I still feel good about the name because in the movie he does a good thing when he protects the woman (Ann Darrow, red.). The real beasts in the movie are the people who want to make money and capture him to do shows. It's just a name, but if you take it literally and look at the works that I'm trying to do on this earth, bringing love and peace, I'm a king from birth! I'm from the tribe of Benjamin; the tribe that brought forth the first king of the Israelites, king Saul. So it's an inborn thing."

Just last weekend was the bicentenary of the abolition of slavery in the Caribbean. In Jamaica a minute of silence was observed. What did that day represent to you?
King Kong: "Well, to me there's a lot of hypocrisy there. Some countries abolished slavery 200 years but others never really let it go. Really and truly, slavery has been a blessing to the world, because out of slavery came I&I to help the world. It built the world too, because slavery really built the West! However black people themselves were the first slave masters! Slavery is just a thing that mankind used through creation and through time. Even right now slavery is still going on. We might not be wearing any chains anymore, but the way we are restricted by the work you have to do to make a living still enslaves you. You can however free up your mind and recognise the Jesus Christ, His Imperial Majesty Emperor Haile Selassie I or even Buddha is the same man. You just have to have clean hands and be pure in spirit. Read your Bible a chapter a day and you will discover the truth for yourself."

If there is one King Kong tune that all the youths still know, it must be 'Rumble Jumble Life'. How did that tune come about?
King Kong: "That tune is a ghetto tune. When I returned to Jamaica, around 1996, I went to check Bounty Killer and I was just waiting for him, reasoning and just hanging around outside. Now I saw one person pass that place about twenty times that night, just going up and down the whole time. Those kinds of youths have nothing to do and their life is really rumble jumble as we say, so I watched them and said to myself: "Boy, what a rumble jumble life! When you check it out, it's just really poor people who pay the price." Most of my tunes started out that way, because I'm someone who gets inspired by reality, by the things that are going on around me. Sometimes people ask me why I don't sing any love tunes, but the reality is that I have recorded a whole heap of lovers tunes, but I kept them for myself. Only love can conquer this mark of the beast thing that is coming, the chip we will get implanted to be checked at the airport and all those things. These people would really love for us to be ruled by something created by man like a computer. It's really terrible to think that we won't even have any privacy left in our houses, without someone or something checking up on us. The people who aren't into this will really have to repatriate and go form the kingdom of God, like it is written in the Bible. There will be pure love there and a shield will be over us, so no matter what is going on somewhere else in the world, it will not affect us. Why would the oppressors, or whatever you want to call them, have rewritten or translated the Bible in English to discriminate their own people? You can read: "I am black and astonishment has taken hold upon me." (Jeremiah 8:21 "For the hurt of the daughter of my people am I hurt; I am black; astonishment hath taken hold on me", red.) or "Ethiopia is the land of our God" (The Blackman's Universal National Anthem written by the Honourable Marcus Garvey "Ethiopia the Land of our Fathers, the Land where all God's love to be, as swift bees to hive suddenly gather, thy children come rushing to thee with the red-gold-and green floating o'er us and our Emperor to shield us from wrong. With our God and Our Future before us we hail thee with shouts and with songs.", red.) and Jeremiah says: "God shall rise Christ to sit upon David's throne in the last days according to the flesh." (this excerpt is actually from Acts 2:29-30 spoken by the prophet Joel: "Men and brethren, let me freely speak unto you of the patriarch David, that he is both dead and buried, and his sepulchre is with us unto this day. Therefore being a prophet, and knowing that God had sworn with an oath to him, that of the fruit of his loins, according to the flesh, he would raise up Christ to sit on his throne.", red.). You can find these kinds of things all over, so we know it's the truth. Read the Bible a chapter a day and you will see! And all who desire love and peace have to leave the West. It doesn't matter if it's Jerusalem or Shashamane or anywhere else in Africa. We might say Ethiopia now, but when we actually go there Jah might direct us somewhere else. So we really have to watch the whole earth, because the earth is the Lord and the fullness thereof is man. It's all about the unification of the minds and spirits of the people coming together to make the New Jerusalem reign."
Alright nuff nuff wisdom King Kong! I want to thank you for taking out the time to share this with us.
King Kong: "Yeah man! Selassie I my brethren! Bless!"