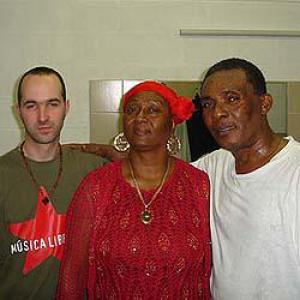 Ken, you come from a musically inclined family. Your sister and your mother both sang. What was the first music that touched your ears? What did you listen to?
Ken Boothe: "Gospel music. When I was young I used to go to church with my mother. While she was washing clothes she would sing the most beautiful hymns from the Bible. Then growing up I listened to my eldest sister, her name is Hyacinth Clover and she just died at the age of 75. When I saw her I really wanted to do what she was doing. I saw her dressing up, and even though I'm not a woman, I used to think: "I want to be like that!" In the beginning I used to sing on the street corner to my friends, a cappella. Sometimes elder people would pass and say: "Hey boy you can sing you know!", but back then I still thought they were joking. When I started going to school - it was still the colonial days back then - the only institution there was to learn (some music after school) was called Boys Town. It was situated on the border of Trenchtown and Denham Town. On my way home - I lived in Greenwich Street - I passed Stranger Cole's house."

How did you two eventually meet up? Were you school friends?
Ken Boothe: "No, when I passed, I always heard them singing, so every evening I would stop to listen. The music just drew me closer, until I was sitting with them and started to participate. Stranger noticed I could sing and we started to hang out every evening. From that point onward, Stranger and me started to write songs together and became as one. Two of the songs that still stand out are 'Artibella', which we did for Coxsone at Studio 1, and even before that one we recorded a tune for Duke Reid called 'Uno, Dos, Tres'. In that last tune we would count from one to six in Spanish. When Stranger took me to Duke and told him he wanted to record a song with me, Reid asked him: "You sure he can sing?" Stranger replied: "Yes man! Listen to him!" To convince him I started singing (sings): "Uno, dos, tres, quatro..." and when Duke heard that he shouted: "Straight to the studio!" and he sent me straight there! In those days when a recording studio was occupied, a red light would be burning. I remember that session was with The Skatalites. They played for both Sir Coxsone and Duke Reid, because they were the only recording band in those days. They got paid per riddim, so the more riddims they recorded in a day, the more they would earn. By the time my slot was up, I was praying to the Lord, asking: "Lord, let me do this!", because when you would make a mistake, the musicians would get annoyed and start complaining about the time. Finally I did it in one cut and Duke shouted: "That's it!" Stranger and I had become like brothers you know, so by the time we wrote 'Artibella', we decided to audition it for Coxsone at Studio 1. You have to realise that at that time Studio 1 was like the Jamaican Motown; everybody wanted to record there."

How do you remember Coxsone then?
Ken Boothe: "Well, I went there with Stranger to audition as a duo. Coxsone loved the songs, so we recorded them and they did quite good. After that I kind of fell in love with Studio 1 you could say. I started to hang around there every day and every day Coxsone would pass me by. I met people like The Wailers, The Gaylads, Delroy Wilson, Jackie Opel and Owen Gray. Eventually the waiting paid off when Coxsone called me in one day and told me he wanted me to sing a solo. I did a soul song first but that didn't catch on because the people were already into the ska-sound. The second song I did was the ska-tune 'The Train Is Coming' and then Coxsone brought 'Puppet On A String' back with him from a trip to the UK."

'The Train Is Coming' was recorded with The Wailers on backing vocals no?
Ken Boothe: "Yes, with Peter Tosh, Bunny Wailer and B.B. Seaton of The Gaylads. That's what used to happen you know; we all did backing vocals for each other. You used to get about 5 Jamaican Pounds for doing that. I almost lived at the studio in those days. 'Puppet On A String' and 'The Train Is Coming' made Ken Boothe a household name in Jamaica. After my period at Coxsone's,for whom I still recorded a string of hits like 'Moving Away', 'Come Tomorrow' and 'The Girl I Left Behind', I moved on to Beverly's where I did 'Freedom Street' and after that still - it's a long story so I'm giving you the short version - to Gayfeet, miss Sonia Pottinger's studio where I did 'Say You'. However, I felt I wasn't being compensated enough for what I was doing, so I eventually started to record for myself. Bob Marley had opened his Tuff Gong store and I, The Melodians, The Gaylads and Delroy Wilson opened a place we called Links, referring to the fact we linked up together. We produced a couple of hit songs but faced a huge contest in the form of the other studio bosses and the radio promoters who saw us as a threat and boycotted our releases. In the end we had to give in and go work for them again. Lloyd Charmers, who lives in the UK now, rediscovered me and loved me a lot. He worked at Federal Records which later became Tuff Gong when Bob bought it. It was also around that period that the music started to gain popularity even outside of Jamaica. I started travelling quite a bit and one of my trips was to Canada. One night, when staying at a friend's place over there, he put on an album by Andy Williams, a white balladeer, and I heard 'Everything I Own' for the first time. My friend, called Paul Buchanan, looked at me and said: "Ken, when you get home record this song!" As it happened I was just completing an album with Lloyd and we still lacked one song to complete the set. I remembered Paul's suggestion but Lloyd Charmers is a person who when he is producing something doesn't like to be told what to do. However when I sang the first line to the musicians they were immediately enthusiastic and started looking for the right arrangements to play it. The song was an immediate hit of course and went straight to number one in Jamaica. Shortly afterwards it also became a hit in the UK and I got an invitation to go on Top Of The Pops. In total I did Top Of The Pops 14 times!"

The song was made hugely popular again in the eighties...
Ken Boothe: "By Boy George!"

Were you surprised that he covered it?
Ken Boothe: "No, he loves me and the way that I sing. When I recorded the song I gave it my style and Boy George sang it exactly the same way. It went to number one again. I've seen the good and the bad side of the music business you know. At one stage the Trojan label went bankrupt and took all my money. However, I just love to sing too much to quit. I always persevere and bounce back. At another phase in my career I started to take drugs. I was hanging out in more sophisticated circles with people who had a lot of money and that way I came into contact with cocaine. After a while I realised that scene just wasn't me. God had given me a task to do and I couldn't waste it on that. When I realised that, I didn't even had to go into a detox program, I just detoxed myself! I still smoke my herb though (laughs). I tell everybody not to fool around with drugs, but herb is not a drug, it's a bush; a bush that they even found on Solomon's grave! It's described in the Bible as giving wisdom. If you do it too much it can hurt you though! I'm not encouraging anyone. Smoking is still damaging to your health. I'm just telling you my experiences. It wouldn't be fair if I only told you nice things and forgot to mention the sad or bad ones. I think I'm a successful person in my own way. I love what I do. For the past 3 years now, I've been coming to Europe. I dreamed of coming to these places to perform and I now see the fulfilment of these dreams. I wanted to get to know and learn about all these places because experience teaches wisdom. I went out shopping today to find a copy of that little peeing fellow..."

Manneken Pis?
Ken Boothe: "Yeah, that's the one! Everywhere I go I want to buy a something as a souvenir to remind me of the places where I've been. My musicians in this tour, a band called No More Babylon, are from France. Music is a universal language though and it doesn't matter where you come from, anyone can understand it. I give thanks to No More Babylon. Colour is not the answer! You have white people who are racist and black people who are racist. We need to put all of that aside and come together. That's the only way we can achieve peace. So when I tour with a band that has some white people in it, it's to show that harmony is possible. There are no colours there, only music. That's why I try to be an inspiration to people who still can't see beyond colour. One of the things holding back the world today is racism, but I believe a generation of people that want peace will come and no one will be able to stop that! Give thanks!"