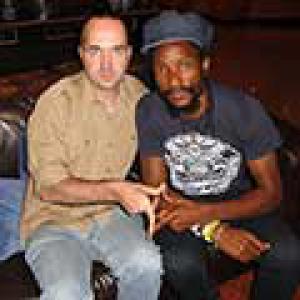 Kabaka, in your music you combine both influences from reggae and hip-hop. Being Jamaican, reggae is in your blood, but how did you get involved with the latter?
Kabaka Pyramid: "Hip-hop was just something I was exposed to from a very early age and the lyricism that goes with it attracted me from the get-go. The content of a lot of hip-hop is also very different from the topics broached in reggae music, with rappers rather talking about their day-to-day situation as opposed to the more generalized social topics you would find in a lot of reggae music. I was always deejaying and doing my reggae thing as well, but hip-hop isn't that dependent on melodies and much more focused on the lyrical side of things, so it always came easier to me."

Like Jamaica has reggae and dancehall, in the US hip-hop is also divided in a conscious and a gangsta scene.
Kabaka Pyramid: "I'd rather call it rap and hip-hop if you want to make that comparison with dancehall and reggae and considering myself a conscious youth I was always drawn more to the hip-hop scene where you'd find artists like Common, Talib Kweli, Mos Def, Dead Prez and even Wu-Tang Clan and Eminem when he was in his prime, because back then his lyrics and rhyme schemes were quite impressive. Like every true amateur of hip-hop I shouldn't forget mentioning original old school rappers like KRS-One, Erik B. & Rakim or LL Cool J, who really laid the foundation."

If I'm well informed, in reggae music it were mostly Sizzla and Peter Tosh who influenced you as an artist. Both could be described as being "militant artists", is that what attracted you to their music?
Kabaka Pyramid: "I think that wouldn't be too far from the mark; most of the artists I listen to have at least some degree of militancy in their music. When you watch Sizzla or Peter Tosh perform, or even just listen to their music, you immediately feel you're listening to the kind of music that could start revolutions. I can only hope my music resonates in a similar way."

I know the "kabaka" part of your stage name was a term used to describe royalty in Uganda. How did you find out about that title?
Kabaka Pyramid: "To be completely honest with you, I just found it online. I was looking for an African sounding name one day and doing a little searching on Google, that name really spoke to me. It's used in the kingdom of Buganda, which is a part of what today is Uganda (Kabaka is the title of the king of the Kingdom of Buganda, the largest of the traditional kingdoms in present-day Uganda, comprising all of Uganda's Central Region, including the Ugandan capital Kampala. According to the traditions of the Baganda they are ruled by two kings, one spiritual and the other material, red.)."

You're part of the Bebble Rock family. How did you get involved with them?
Kabaka Pyramid: "We already used to be friends from when we were kids and used to run our own little sound system called Time Bomb and eventually that also led to us building our own studio. At first we still referred to ourselves as Bebble Team, but in time that developed into Bebble Rock, which is now also the name of our record label."

When you released your first EP 'Rebel Music', why did you opt to offer it online a free download?
Kabaka Pyramid: "That's pretty simple really… At that time nobody really knew who Kabaka Pyramid was yet, so who was I to say: "Buy my music!"? To me the most important thing was to get my music out there and for the people to get to know Kabaka Pyramid as an artist. In that respect offering the EP as a free download was absolutely the right move. In my opinion people shouldn't be restricted by money when it comes to music."

The follow up to 'Rebel Music' is called 'Lead The Way'. For you as a musician, what has been the big difference between both EP's?
Kabaka Pyramid: "Both were completely different experiences really; 'Rebel Music' was just me in the studio trying to define this reggae-hip-hop hybrid I wanted to become my signature sound, while the songs on 'Lead The Way' are mainly a compilation of tracks I recorded collaborating with various producers from around the globe (Irie Vibrations, DJ Smurf, Chimney Records, Israel Records, Union World Music, red.). That's also why I don't really regard 'Lead The Way' as being the follow up EP to 'Reggae Music'; the approach in recording both EP's was just too different."

Something you're involved in outside the scope of music, as is Jah9 for that matter, is yoga. How did you discover that practice and what would you say do you get out of it?
Kabaka Pyramid: "The world is changing fast and people are getting ever more conscious of what's happening around them. Things that before might have been regarded as exotic or mystical are now becoming the norm. Personally speaking I've always been someone who's gone in search of knowledge and that's also how I discovered yoga. I'm not the type of person that knows the history and facts behind everything; I'm much more interested in what having that knowledge can do for me. When I first tried yoga I noticed that in a short time my body started becoming more flexible and I started feeling more energetic and balanced, both on a mental and a physical level."

When talking about this new wave of conscious artists coming out of Jamaica, people like Protoje, Chronixx, Jah9 and Jesse Royal, music journalist often try to portray this as being one coherent movement. How much of that image is accurate?
Kabaka Pyramid: "Well of course reality is always in the eye of the beholder, but personally I would say there's definitely a certain energy, a certain vibe being shared by these artists you just mentioned. We all more or less started out sharing the same small stages, so we saw one another develop as artists and I guess that has created a sort of unity among us. It's just a natural vibration among likeminded musicians supporting each other. I just see it as a joy to be associated with this group of talented young artists. In the end we're just replicating in our music the things we like to listen to ourselves, and I mean that both in a lyrical and a musical sense. I think this type of movement or energy is nothing new; it's something that comes around every so many years and I'm just lucky to be a part of it."