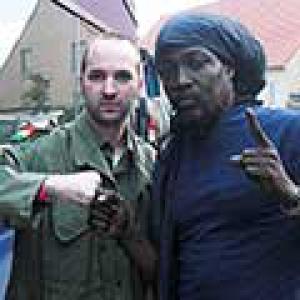 Junior, you were born in a part of Kingston known as Waterhouse. People have often compared your vocal style to that of Michael Rose, but also to that of singers like Yami Bolo and Don Carlos, all of whom were also from the Waterhouse area. Do you think there's such a thing as the "Waterhouse Wail"?
Junior Reid: "Not really, no, it was just a way of singing that was popular for some time. Personally speaking I grew up listening to people like Dennis Brown, Hugh Mundell, Freddie McGregor, Leroy Smart and even Michael Jackson."

Hugh Mundell was more than just an influence; at the beginning of your career he was your mentor and the one who produced your very first tune ('Speak The Truth', red.). You were even with him in the car the day he got shot and lost his life. How do you remember him?
Junior Reid: "Hugh was good man and a great great inspiration to me. It just happened that that day the evil forces decided to descend upon us and take him away, all for some material things. Fortunately his music still lives on."

Did that incident change your outlook on how you wanted to deal with things?
Junior Reid: "Well, it mainly left me feeling that it was now up to me to carry on the works. Hugh Mundell had always encouraged and pushed me, so after he passed away it was up to me to continue the voyage we had begun together."

A lot of reggae fans will know you from your period with Black Uhuru, but earlier on in your career you were already part of another group called The Voice Of Progress. Why didn't that project last longer?
Junior Reid: "The Voice Of Progress was Terry (Progress, red.), Sammy (Progress, red.) and myself. We even had quite a hit with 'Mini Bus Driver' at one point, but to keep on top in the music business you have to keep on moving all the time and after a while I felt Terry and Sammy didn't want to go where I wanted to go or at least not at the same speed. (laughs)"

How did that whole Black Uhuru thing start for you? Did they come to find you or did you go to see them?
Junior Reid: "When Michael Rose left the band they needed a new lead singer, so that's when they came to see me. As you already stated earlier, I'm from Waterhouse and Black Uhuru is also a Waterhouse band really. At that time they were at the top of their game and had just won the very first reggae Grammy Award (1985, red.). To disappear at that point would have been a sad thing, so I felt it was kind of my duty to put my solo career on hold and step in."

You're also one of these artists who are completely independent, running your own label (J.R. Productions, red.) and studio (One Blood Studio, red.). I guess I don't have to tell you the music business is struggling these days, so how are you coping with that?
Junior Reid: "I just do my music you know and whatever comes comes. I never went into the music business for the money; I just loved the way you could touch people through song. I still have a loyal fan base buying my records and apart from that there are still the live shows."

As a reggae singer you're one of the rare ones who successfully managed to crossover into the hip-hop scene. What do you look for in these collaborations?
Junior Reid: "To me it's all about unity in music and to show people that even a reggae singer from a small country like Jamaica can have this little something to offer. For me working with these hip-hop artists is also a chance to take my music into another direction. Music shouldn't be limited you know."

And the bling hip-hop lifestyle doesn't clash with your Rastafarian convictions?
Junior Reid: "No it doesn't really. My music has never changed, so even when I'm doing a song with a hip-hop artist, my message remains the same. I always bring positive vibes and my fans know that."

Your biggest tune to date is still 'One Blood', a song that's become so well known, even in hip-hop circles, that's it's almost bigger than Junior Reid. Do you agree?
Junior Reid: "(laughs) I guess however big that song has become it still represents Junior Reid in a way. I just give thanks that a song that I've recorded over twenty years ago is still relevant today. A good seed will always bear good fruits and that's exactly what happened with 'One Blood'. I can only take pleasure from that."

You were one of the first artists who publicly profiled themselves as being boboshanti. What attracted you to that branch of the Rastafarian movement?
Junior Reid: "Well, as a youth I was already interested in Rastafari, but I never felt I got the full understanding of the movement, so what I decided to do was to visit all the different camps from Twelve Tribes or Orthodox to Nyahbinghi. Now when I visited the Boboshanti at their camp, I really felt this was the place I wanted to be. Bobo Camp is like a place where the poor and the have not's and the homeless can find shelter. Apart from that there's also a productiveness going on there that I couldn't really find in the other organizations. The boboshanti have a tradition of making brooms for example, which they sell to make a living. Ten percent of the proceeds always go back to the organisation. I just felt really at home with their ideas and the way they went about in realizing them. Boboshanti is about three in one and one in three about this we never disagree; Holy Emmanuel I, Marcus I & Selassie I! One man so round you can't go round him, one man so short you can't go underneath him and one man so tall you can't go over him! Representing Emmanuel I, Marcus Garvey and Selassie I in this way prevents discrimination as each one represents a part of society, so you can't look down on anyone for being this or that as all are a part of the Holy Trinity. Emmanuel taught us God always moves through man, but unfortunately the same is true for Satan. It's up to us to do good, fight bad and fulfil God's plan! Rastafari!"