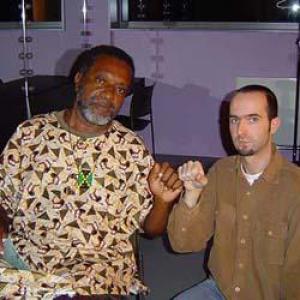 Forever and a day, Junior Murvin's name will be synonymous with his biggest hit single 'Police And Thieves'. Fact is the man has one of the most remarkable voices in reggae music, even though he'd rather avoid using the term "falsetto"...

Junior, your unmistakeable falsetto voice is still as strong as ever. Is there anything you do to protect it or to train it?
Junior Murvin: "I'm not criticising music schools or anything, but I have a "real-setto", not false. Anything false can not come from your body. So I correct that: it is a "real-setto"! I'm a disciplined singer.  I do things that are disciplined: I jog, I don't smoke, I don't drink, I don't have a lot of women, I go to bed early and I keep singing and basically I'm talented from God."

An artist that really influenced your singing-style was Curtis Mayfield (just as it was for Bob Marley red.). What was it about Curtis Mayfield that grabbed you?
Junior Murvin: "Well, a lot of singers, people like Nat King Cole, Marvin Gaye, Sammy Davis Jr., Sam Cook, Billy Epstein - I could go on and on - inspired me from when I was a little child, but Curtis Mayfield was a spiritual singer. He sang for the people, to help them to live better. He was an American type roots singer. All black men come from the same root, so spiritually and musically Curtis Mayfield came to Bob and to me."

Lee Perry already prophesised it a long time ago: "'Police And Thieves' will never die!", but what does the song mean to you? Has it been your blessing or more of a curse?
Junior Murvin: "That song is a song that just came to me. It was like a messenger, an angel of some sort, sent that to me. The rest is history. I went to Lee Perry and we sorted it out together. Sometimes I sing songs and don't even realise the impact they might have until afterwards. It was like that with 'Police And Thieves'; they called it a social comment."

On that topic, the song was definitely hot back then but apparently not all that much has changed?
Junior Murvin: "Worldwide now and more even. A new generation is also catching onto it. I'm doing a lot of college shows now, so I'm singing to a whole new generation and it makes me feel very good inside to be able to do that. My interest is to uplift human beings to the highest heights!"

Can you recall your time with Lee Perry and how he was to work with?
Junior Murvin: "When I went to Lee Perry, he rated me very high. He told me one time I reminded him of Bob. Bob was influenced by Curtis Mayfield and by Lee Perry to. And with me that came right back, so when I did 'Police And Thieves', Scratch said: "Well this youth sound like Curtis Mayfield!"  He is a great producer and he taught me a lot. What he did was good stuff; the 'Police And Thieves' album is still selling!"

You released a whole string of albums in the seventies and eighties, but, except for 'Police And Thieves', they are very hard to find. What happened there?
Junior Murvin: "What really happened is that the producers that I recorded these albums for, never really understood how to market them properly. For example, I did a record for Mikey Dread called 'Bad Man Posse'. It went to number one in the Black Echo charts in 1981, but bad marketing stopped it from selling. 'Police And Thieves' did so well partly because Chris Blackwell knew a lot about marketing reggae properly and also because that tune went internationally. It was in the British charts, Boy George covered it, it was in about five movies, Luciano did a version, George Nooks did a version, The Clash did a version..."

In closing, do you have any special words for the readers of this interview?
Junior Murvin: "Yes...you people keep on doing what you are doing for reggae. I'm so very happy that people like you can help us to push reggae further. May God bless you!"