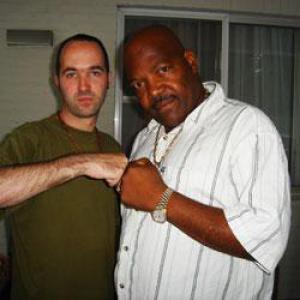 Josey, if we take it all the way back, when did your musical career start? When was the first time you held a mic in your hands?
Josey Wales: "As a youth, U Roy, who was still with King Tubby's Hifi at the time, was my idol; it was really him who inspired me to get into music. It was the whole package that appealed to me: his style, his craft and the dress code he upheld. I started out doing a little soundsystem here and there; there was Roots Unlimited at Waltham Park Road, for example, small-time stuff really, but I persevered and eventually ended up with King Sturgav around '78 or '79."

King Sturgav is one of the oldest sounds in Jamaica and maybe more importantly it's still running today. What does it represent to you personally and what is Sturgav's place in Jamaica's musical history?
Josey Wales: "What it represents to me personally is my craft, the medium I use to express myself. The music we bring is roots music; we represent an era that has gone out of the minds of most of the people from younger generations. By being around Sturgav, I can still inject the wisdom of the past into the present. To me doing sound is also much more pleasurable than doing a live show. When we do a sound system set, it can go on all night allowing me to go wherever I feel like."

Musical taste has changed a lot over the past decades. Do you think the sound Sturgav offers is still relevant to today's youths?
Josey Wales: "Oh yes! If you're going around singing slackness tunes or gun lyrics, propagating negative things so to speak, you will incite more negativity. Everything has its place, even slackness, but we are there to serve the people who love positive things. The message we spread should not be underestimated, it's very very important we're still around!"

Back in the days the Rastafari philosophy also played an important role in Sturgav. Is that still the case?
Josey Wales: "Well, I see a lot of artists wearing dreadlocks and proclaiming they are Rastafari, but the doctrine they are preaching is a far cry from the Rastafarians that used to be around back in the days. If you just look at the dress code of some of the Rastafarians today, Rastafarians back in the day wouldn't have dreamed going dressed like that. I'm not judging anything, but just pointing out that things have changed. That's why, where Sturgav is concerned, we still put out the same conscious vibe we did before, but without really emphasizing too much on the whole Rastafarian thing."

Most non reggae lovers will know your stage name as that of a character played by Clint Eastwood. How did you come by it?
Josey Wales: "(laughs) Back in the day you really had a trend of deejays taking on cowboy names - you, John Wayne, Lone Ranger and of course Clint Eastwood - where the name you took on had to correspond in some way with your own character. Josey Wales was just a name that fit me; let's keep it at that. (laughs)

One of your other nicknames is 'The Cornell'...
Josey Wales: "That started when I joined Sturgav. You had Charlie Chaplin, nicknamed 'The Principal', Daddy U Roy, 'The Teacher', Inspector Willie and Josey Wales, The Cornell. It was a street thing and I can't even exactly remember when or where that started."

You pierced the recording market when you started to work with Junjo Lawes. How do you remember him? What kind of a guy was he?
Josey Wales: "Junjo was a nice guy. God bless his soul. Him step off now ("he passed away", red.), but that's life. He really supported me in the beginning of my career and I really appreciated that because I was trying to escape a certain lifestyle through music. But the same can be said for George Phang of Power House or even King Jammy, who I regard as a brethren, but who maybe didn't love me as much as I loved him. (laughs)"

At the end of the nineties you were the victim of a violent robbery. Violent crime is one of major problems in Jamaica, so has that incident focused you more on that subject, in your lyrics for example?
Josey Wales: "Yes, of course. We've got a saying in Jamaica that goes: "If you don't dip your foot in the water, you can't tell the real temperature", meaning that if you haven't experienced something first-hand, you can only give an opinion. That night in 1997 I was returning from a Bob Marley memorial in St. Ann and I got robbed and shot in the back, but they say: "Out of evil come forth good.", because what happened next was a blessing. I got shot at St. Ann, but they had to transport me to Kingston for treatment by helicopter. Now afterwards I heard I got lucky, because just the day before the only two helicopters on the island were broken down. Now months after the incident when I was revalidating in New York, I remembered that and decided to invest in a small ambulance and ship it over to the island. The mystic one, whatever you want to call him, God, Jah or Jesus Christ, always knows best, because if I hadn't gotten shot, I may not have had the mindset to buy that ambulance. Sometimes a little blood has to run to make things right!"

In conclusion, what is Sturgav's secret, is it the music or the people behind it?
Josey Wales: "It's a combination of the two. What I brought to the sound when I joined is a sort of Rastafari roughness or vigilance - I don't want to use the word aggressiveness - and a more up-tempo vibe; I toughed it up so to speak. (laughs) I think the real secret lay in the diversity of faces behind the sound, each with its own style and personality. And by the grace of the Most High we're still together! One love, Rastafari!"