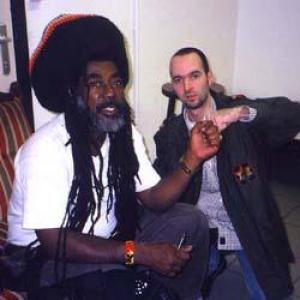 Although Johnny Clarke has never reached the status of some of his contemporaries like Bob Marley or Burning Spear, he undoubtedly belongs to a select club of top vocalists in reggae's history. Probably the most prolific moment of his career was his collaboration with producer Bunny Lee. Using the so-called flying cymbal, they created what today is known as the rockers sound. True reggae aficionados can spot the real deal immediately and Johnny Clarke is just that. After a well received set at the Hove Live festival, we were lucky enough to get the man to grant us this interview.

Johnny, you just finished performing at the Hove Live festival. What feeling does a performance like that leave you with?
Johnny Clarke: "I really feel very much encouraged. It should have gone on and on and on. It's like a blessing for I & I & I, it's all about "us", unification. Unity and strength is what I saw here tonight. It was really strong and powerful, both the audience and the performer were full of energy."

When the name Johnny Clarke pops up, a lot of people immediately think of the song 'Roots Natty Culture'.
Johnny Clarke: "Alright...The hit song! Actually, that's my favourite number as well, because I wrote that song. That's a Johnny Clarke original that came from deep meditation. Those are the type of lyrics that keep coming out when I'm sitting alone meditating. That song has a real strong message."

Why did you do so many cover versions in your career? What was it that made you record these songs?
Johnny Clarke: "Well sometimes I covered songs of which I felt that they needed to be known more. Sometimes you have songs that are "hidden" on an album. Singles or 45's are more focused on the public and get more airplay from radio stations, so if I felt a song was strong enough, I did a version and put it out as a single. I also did it to show my versatility, to show that I could do my own material as well as that of other artists and to get the roots, the culture and the message across."

You've worked with a lot of producers during your career, people like Bunny Lee, Rupee Edwards, King Tubby, Joe Gibbs, Mad Professor, King Jammy and so on. Who left the biggest mark in your memory?
Johnny Clarke: "My favourite was the one that produced the most hits for me, the one who was involved in my most popular songs, and that was Bunny Lee.  He was the one that really established my name and made me popular throughout Jamaica and all over the world with songs like 'None Shall Escape The Judgement', ‘Rock With Me Baby', 'If You Should Lose Me', 'True Believer In Love', 'Roots Natty Congo', 'African Roots' and so on.  Rupee Edwards was there in the beginning, my dancehall days, with songs like 'Everyday Wondering', that he redid and called 'Irie Feeling'. It went straight up in the British charts; the first time one of my own songs went up in the charts. That was in the seventies, in the time before the flying cymbal. It was Bunny Lee who introduced the flying cymbal and made the tempo of songs more upbeat. The cymbal was the symbol! At that time it was like there was a new sound and a new singer: Bunny Lee sound and Johnny Clarke!"

How do you keep things fresh? Where do you keep finding the inspiration, something I can imagine not being entirely evident after thirty years?
Johnny Clarke: "It's all about keeping active. Doing a lot of touring pays off, you get the vibes from the fans everywhere and that plays a big part for me. It is so encouraging and it charges my battery again and again. My fans play a big role and I give thanks for that."

You were born in Trenchtown. Could you tell us something about your youth there?
Johnny Clarke: "Kingston 13 and Kingston 12...in my time it was all about music. In those days I was still an amateur, I wasn't an established artist yet. I was trying to get a break in the business, so I did a lot of small-time club shows in my neighbourhood and my community and I played at school concerts, barbeques and so on. In Jamaica you have to make name in your own community first and then after that you venture out into the national or maybe even the international arena. When you made it into a studio, automatically you became more known, because the studio released your music on a 7", and those 7" circulated the whole island. Then if you had had enough singles that became hits, you got the chance to do an album."

It seems that nowadays everybody in Jamaica wants to become a singer, but only few still want to take the time to learn how to play an instrument. Is there any truth in that?
Johnny Clarke: "It's good to know that you have learned about that. If you heard it all the way over here, in Europe, so far away from Jamaica, there must be truth in it."

Isn't it also part of the musical evolution in Jamaica? A lot of these new dancehall or ragga riddims are created digitally on a computer.
Johnny Clarke: "You see, you know what is happening! Nowadays the technology increases day by day!"

And do you regard this evolution as positive or negative?
Johnny Clarke: "I see it more as a negative thing. The Bible already told us about the singers and players of instruments, who play the harp, the timbrel and the horns and so on. This should not be erased from the music! It shouldn't be like that!"

The explicit nature of dancehall music seems to be having an ever increasing, mostly negative, impact on the Jamaican music industry. What are your views on this evolution?
Johnny Clarke: "Well you know, reggae music has been getting a fight for years. I don't really see what is new about it. I never made a distinction between whom or who was buying reggae, gay or not. I just saw a man, so if you are this or that, it is up to you to deal with that. It is also true that the majority of the people in the world are not gay, so we could also go with that fact. You have to realise that we in Jamaica are not even five million strong, so music-wise we are mainly catering for the outside world. We have a lot of support from all over, but there are some people who have been fighting reggae from long time and now they are coming up with new excuses about this and that. But righteous people will ignore that and see it as just another stumbling block, because that is really all it is: just another stumbling block. Years ago it was something else; look at what Bob Marley was doing, and still some people were speaking up against him! That's also part of this issue; after his death people departed from his message and from roots music and went more into dancehall. It's a different style of reggae music; from the same tree, but a different branch. And with that comes a whole new bunch of people who let us know what they are dealing with through their kind of music. You have to make a distinction between roots rock reggae and dancehall."

There seems to be a lack in spirituality in that music though. The blend of roots rock reggae and Rastafari created not only a style of music but also a spiritual identity, while, looking at the dancehall community, they seem to be mostly copying or propagating things they see in the west, like in the United States.
Johnny Clarke: "What they are doing is looking around the world, seeing what is happening and focusing on that. Dancehall is a kind of retaliation. They are sending out a warning: "If you step on my corn, I will defend it!" Sometimes it's all about war. Maybe the lyrics have so much impact now because melody-wise there is not much to listen to. In this way of course you may stumble on some things you don't want to hear. But what I&I is concerned, my way is about roots and culture."

In conclusion, what message do you want to leave the readers of this interview with?
Johnny Clarke: "Just stay focused! I hope that reggae music will become even more popular than it is now. You have different eras in reggae music and you have to know which one to choose. Ask yourself which one can bring something more to you. It's all about what the music can do for you: the comfort, the enjoyment, the joy and so on. And remember God is responsible for the whole of I&I&I! I&I must be a servant, because H.I.M. knows best and no man knows better than the Most High. The man who created I&I is greater than the whole of I&I&I. The one who is greater than I&I lives within I&I, there are no secrets. I can hide things from you or do things behind your back, but from the one who is greater than I&I there is no place to hide. He knows everything and guides and protects us. He secures our livity from day to day. We are all depending on Rastafari. We are all one as man. Some act negatively and some act on a more positive level, but as I said before, man will get the pay for the works he does. The Father knows what pay we deserve. So leave everything to Rastafari, he will penalise who is to be penalised, and beat who is to be beaten. That is why I say: "Leave all vengeance unto H.I.M.!" Not even your tears will save you! Crying won't help, just spiritual righteousness, because the weak hearts shall fall and the righteous shall stand and no one shall escape this judgement. We will all have to face it when the right time comes. So just stay focused and strong and live clean. Remember godliness don't deal with dirtiness! Stay clean inside out and when you smile make your heart smile as well. Bless!"