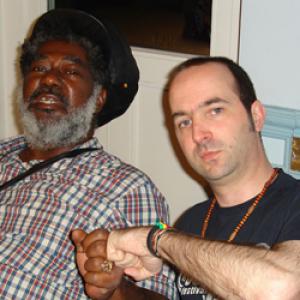 Johnny, judging from archive photos I've seen, you were still a very young guy when you took your first steps in the music business.
Johnny Clarke: "Well, I kind of grew up in a very musical family, you know. Like so many in Jamaica I started out as a choirboy, singing in church, but my first steps in the commercial circuit I really took when I started hanging out with a local sound system called VJ the Dub Master. That man motivated me a lot in those early days. At that time I was still attending school, but I already knew what I wanted to do with my life, so what you did in those days was go to downtown Kingston and visit all the different producers there, hoping that one of them might take a shine to you and let you voice a tune. It was all about persistence and determination in those days. I got my first break when Clancy Eccles let me voice a tune called 'God Made The Sea And The Sun' (1972, red.). It didn't do too much to be honest, but I kept on going and moved on to work with Rupie Edwards. For his Success label I recorded a tune called 'Everyday Wondering' (1974, red.). On the B -side of that 7" was another tune called 'Julie' and it was that track that became my first real hit in the dancehall. I voiced that tune at King Tubby's studio and that was really the beginning of my career as a hit maker. Of course, the ball really got rolling when I voiced 'None Shall Escape The Judgement'. The instrumental part of that tune was recorded at Treasure Isle and I did the voicing at King Tubby's. I always voiced my songs at night, because my throat tended to clearer then and my voice would sound smoother. That song also launched a new revolution in reggae music, the sound we now know as the flying cymbal."

Santa Davis told me he almost stumbled on that whole flying cymbal thing by accident.
Johnny Clarke: "When musicians go into the studio, they often like to fiddle around with their instruments a bit before getting to the serious stuff. That's also how that flying cymbal sound came about; Santa was just flexing his muscles before a recording session. Now when we all heard what he was doing we asked him if he could repeat what he'd just been doing and the rest is history, as they say. I was just at the right place at the right time: a brand new sound for a brand new youth on the scene. Capitalizing on this new invention I scored hit after hit after hit in that period. For a youth coming from the ghetto, that was important; not only to make a name for yourself, but as a way out of poverty. In my opinion, that's also the reason why these songs are still as strong today as they were back then; we weren't making music to have a bit of fun, we were giving it all we had because it was the only thing we had. Personally, I also give thanks for the invention of the compact disc, the CD; because thanks to that invention a whole new generation was able to discover the music we did back in the sixties and seventies. With the internet and mp3 things have moved to a whole other level altogether now. For me it's all good, because now they can't hide good artists anymore. Back in the day you could be boycotted or they could remove your name from the record, but thanks to things like YouTube or MySpace you can reach the whole world now and no one can stop you! Of course it also confronted us with a big wave of piracy, that's a negative thing that came with it, but we will just have to learn to deal with it. As long as I have some food on my plate, I'm not going to start to point the finger, you know. Even if it's daylight robbery, it's still promoting the music, though. Pirating has already been around for ages even back in the day when vinyl was still king. People will always try to find a way to beat the system, you know."

You were part of a whole host of artists that got signed by Virgin Records back in the seventies.
Johnny Clarke: "Now you're mentioning Virgin, I don't know if you know this, but 'Authorised Rockers' was the first reggae record ever to be released on CD, it was first released in 1991 even before Bob Marley's albums were re-released on CD (Bob Marley's ‘Legend' compilation was actually released in 1990, just slightly earlier than Johnny's ‘Authorised Rockers', red.). The arrival of Virgin Records in Jamaica came as a blessing because they were a company that really took care of their artists. These Front Line (Front Line Records or Virgin's Front Line was a label for issuing Jamaican and English reggae music from 1973 to approximately 1987. It became an actual label name in 1976 when it succeeded a category of Virgin albums and singles marketed as 'The Front Line Series' which went back to 1973, when a reggae compilation album titled 'The Front Line' was issued on Virgin, red.) records are still being re-released regularly today, that has to mean something. When Virgin came to Jamaica they were looking to sign the cream of the crop, so to speak, and as I was at the top of my career in that period, I was one of the artists on their list. I think the investment they made back then paid off for all parties involved. The tracks I did for them - songs like 'African Roots' or 'Roots, Natty Roots, Natty Congo' - are still the ones people probably know me for best."

Despite that success, you migrated to the United Kingdom in the early eighties.
Johnny Clarke: "Well, Jamaican people are loving people most of the time, but at times we can be violent as well. (laughs) In that period there was too much division on the island (Supporters of Edward Seaga and the Jamaica Labour Party or JLP and Manley's People's National Party or PNP engaged in a bloody struggle which began before the 1976 election and ended when Seaga was installed as Prime Minister in 1980. While the violent political culture was not invented by Seaga or Manley, political violence reached unprecedented levels in the 1970s. Violence flared in January 1976 in anticipation of elections. A State of Emergency was declared by Manley's party the PNP in June and 500 people, including some prominent members of the JLP, were accused of trying to overthrow the government and were detained, without charges, in a specially created prison at the Up-Park Camp military headquarters. Elections were held on the 15th of December that year, while the state of emergency was still in effect. The PNP was returned to office. Violence continued to blight political life in the 1970s. Gangs armed by both parties fought for control of urban constituencies and in the election year of 1980, around 800 Jamaicans were killed, leaving many Jamaicans shocked by the violence that had occurred. In the 1980 elections, Seaga's JLP won and he became Prime Minister, red.), with one set of people on one side and one on the other; in Jamaica they call this politics... That negative vibe even started influencing the music and politicizing the dances. After a while the dances just started to die down, because people either didn't want to come anymore or were too afraid to do so. On top of that, as you just said, the music itself was undergoing a change as well, becoming digitalized and straying away from the roots message that had been popular until then. All these things made a lot of artists from my generation decide to move away from the island for some time. Personally I just didn't want to get mixed up in all that negativity."

What kind of music do you enjoy yourself these days? I read somewhere; you're a bit of a jazzman.
Johnny Clarke: "Music is more than just music, you know. People who drink alcohol or like a little smoke now and then, do so because they enjoy the mind state these things bring them, but I experience all of that by listening to good music. Good music can even have a healing effect. It's like good food; it has a nurturing element to it. To me there's nothing better then a bit of nice melodious jazz; that's the music I can go to bed with. Sometimes I can just sit down at home and play music for hours on end. For me it's never just been about reggae, it's about the feeling a piece of music, whatever the genre, can give you. It's not for nothing the Bible talks about singers and players of instruments (Psalm 87 verse 7, As well the singers as the players on instruments shall be there: all my springs are in thee, red.)."

Johnny, thanks for sharing your wisdom with us!
Johnny Clarke: "Respect my brethren, stay true! I&I tell it like it is, without fear, plain and straight as they would say a yard! Selassie I!"