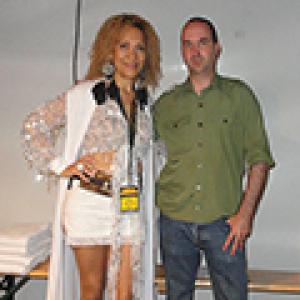 J.C. the first thing that struck me in your biography is that your first big love in music was The Beatles.
J.C. Lodge: "Beatles music has become iconic, so even after all these years they are still among my favorites, but of course the list has grown a lot longer over the years."

Contrary to a lot of Jamaicans, you were born in the UK but moved back to Jamaica as a child. What was the story there?
J.C. Lodge: "Well, my parents split up when I was only three years old and I ended up living with my dad until about the age of ten. I guess at one point it became too hard for him to raise me as a single parent, so he took me to live with his family in Jamaica. At first it was quit traumatic, but then I got used to it and fell in love with the music and the culture. If I'm honest to this day, I still feel more Jamaican then English."

I can't but wonder… If you lived in Jamaica for so many years how did you manage to hold on to your British accent?
J.C. Lodge: "(laughs) Even though my father was Jamaican, he was very particular about how people spoke and he always used to tell me: "Don't start speaking that Jamaican patois!". I always kept that in mind, but also the social circles I mingled in were mostly upper middle class and even though you'd hear the odd word I patois used, the Queen's English was the preferred way of expressing yourself."

When you were still in school, music wasn't even on your mind as you were contemplating a career in arts and drama. At which point did that change?
J.C. Lodge: "I had always loved singing and music, but it wasn't something I was seriously considering as a career choice. Towards the end of my high school years I met Errol O'Meally, who is my husband and manager now. He fancied himself a songwriter and in fact was quite good at it. He told me he'd heard me singing and asked me if I'd be willing to voice some of his songs. Those first recordings were still an amateurish affair: Errol tapped the riddim on the table with me singing over it and we recorded everything on a simple cassette recorder, as you did in those days. The idea was to pass those tapes to people in the Jamaican music industry to see if anyone would be interested. That's how they ended up with people like Willie Lindo and Clive Hunt, at that time working for Joe Gibbs. Eventually Errol Thompson and Joe Gibbs showed some interest and invited me to come back to the studio. It still took months though, cause there were always people lined up to use the studio and I certainly wasn't given any priority treatment. Looking back on it now, I even wonder why I kept going back… (laughs) The very first song they had me voice was 'Do That To Me One More Time', but that didn't cause much of a stir. And then of course Joe came with this tune by Charly Pride called 'Someone Loves You Honey' and told me he wanted me to do a reggae version of it. I recorded my version in September of 1980 and by 1982 it had already become record of the year in The Netherlands."

As you just stated, the tune was massive in The Netherlands resulting in you being invited to perform on TopPop, the now legendary television music show hosted by Ad Visser. Do you remember that performance?
J.C. Lodge: "Oh yes, absolutely… In fact George Nooks or Prince Mohammed as he was known back then didn't make it or they couldn't track him down or whatever and on the show he was replaced by a guy called Patrice (Tan, brother of radio and television presenter Humberto Tan, red.), who I still have fond memories working with."

Unfortunately 'Someone Loves You Honey' was also the tune that reportedly bankrupted Joe Gibbs. When were you made aware of that fact?
J.C. Lodge: "Well at one point I learned he'd put his own name down as the author of the track, just to make more money. That's unfortunately how he was you know…"

You then moved on to working with Gussie Clarke with whom you recorded among other things 'Telephone Love', which was on the 'Selfish Lover' album. The cover of that album was quite revealing; your own idea?
J.C. Lodge: "(laughs) I agree, it was quite revealing, but to answer your question, yes it was my own idea. Some of the songs on the album were quite suggestive in nature, so I felt it should have a matching cover. It was actually more suggestive than revealing, as I was actually completely covered, so you can't really see anything, but it gave the illusion of being a bit naughty, which was exactly what it was intended to do."

After the birth of your daughter, your career took another direction, as you started focusing on children's music with the Sing & Learn project.
J.C. Lodge: "I started enjoying songwriting when I was still working with Gussy and when I had my daughter Gia, I started contemplating if I could write her songs I could teach her things with like reciting the alphabet or counting from one to ten. I had done quite a few of these, when my husband commented one day that it would perhaps be something we could market. In the meantime we've released three different cassettes: one for children age 4 to 6 and the others for children up to the age of 10. It's something we'd certainly want to pursue further, but I got otherwise occupied…"

I read on your Facebook page you recently got your degree as a teacher.
J.C. Lodge: "Exactly and getting that degree kept me quite busy for a while. I want to start working as a primary school teacher and see if I can perhaps integrate our Sing & Learn project somehow."

To me, and I guess many other reggae lovers out there, you're one of the icons of lovers rock. Is that also how you see yourself?
J.C. Lodge: "To me lovers rock is a term English people use to describe music that was made by West-Indians living in the United Kingdom, when my career really started in Jamaica where that term isn't really used. I accept if people want to consider me a lovers rock artist, but not all of my music fits into that one category."