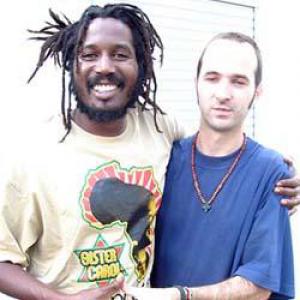 Jahmali, I gathered from your biography that you weren't completely sure about a career in music at the very beginning. You walked around with plans to become a teacher at one point.
Jahmali: "(Laughs) Ah the teacher thing... Well what happened is that by the time I was a teenager, my mother had started a school in our community. I was a youth that did quite well in high school and I was also leading the choir at church and things like that. I clearly showed I had the ability to lead people. My mother then asked me to help her out and teach the kids. Initially, I taught there for two years. That was all before my mother migrated to the United States and right now there's a school carrying her name in Clarendon to honour what she did for the community. She's now an ordained minister in the church and has turned over the school to someone else. I'm telling you all this just to show you that teaching was like a natural part of me. After high school I wound up going to teacher's college but I realised that my true passion was teaching in the wider classroom of the world through my music."

You feel you can still teach people through your lyrics and your music then?
Jahmali: "Yes, I feel really good that I can try to affect change in the world by coming to these different places. These days the people's minds are filled up with the contrariness that is going on in the world, the wars and so on, but essentially all people thirst for righteousness and cry out for peace and justice. That is an international cry and I really feel obliged to go out, share this vibe and let the people know that no matter where in the world we are from we share the same experiences and that it is time to be positive and to stay positive and focused. We should become more aware of ourselves and our brethren in the global community and cherish a fellowship between humans, a communal vibe. We're all one human community you know. We should see actions and deeds. That is the bottom line."

I couldn't agree more. You started out in music partly because you were a big fan of Cocoa Tea. You even started out under the name Ryan Tea if I'm correct.
Jahmali: "Yeah, Ryan Tea or Junior Tea."

When did that change into Jahmali and what is the meaning of that name?
Jahmali: "Well, first of all, my name changed because of my new-found way of life. I decided that since I started out with the name Junior Tea - a lot of people knew me that way - now that I was changing my livity, I thought it was only natural I should also change my name. However, over the years I had fallen in love with the "J" sound of my name, so I wanted to keep a name starting out with the letter "J". One day I was working with one of my brothers in a carpentry shop and a guy we both knew passed by. I didn't know his surname but I heard my brother call him Damali and that name had a ring to me. It was just around that time that I was looking for a new name for myself as well, so I just replaced the "D" with a "J" and that was that. Later on I went to look if the name Jahmali also had a meaning and found out that "mali" means "free" and "jah" means "that what will live forever". That kind of epitomises the kind of person I am in my heart. I'm a very free, very open-minded person. It was very satisfying to me to find out that my name really meant something of that level."

Your first big break came with your first album that you recorded with Donovan Germain (producer for Penthouse records, red.), 'El Shaddai'. How did you hook up with him?
Jahmali: "Well, in Jamaica you have a lot of prolific producers and they each have their own headquarters so to speak. As an artist you "circle", meaning you go from place to place every day to check out what's new and what's going on and what we could voice. Penthouse was one of these places where we used to pass. A lot of artists used to gather there. You had Penthouse and Anchor studios in the same yard then. At first Germain didn't even want to record me, but eventually I managed to record some tunes for some of his sound engineers and he noticed me. It was really the song 'El Shaddai', which made him start to take me more seriously."

About a year after the 'El Shaddai' album, you released the follow-up 'Treasure Box', which was also a very good album, but after that... nothing... Everything surrounding Jah Mali went silent. What happened in that period?
Jahmali: "I was at the crossroads. Trying to figure out, not really which way to go, but why people were not even aware of these crossroads. I stayed at that place or point in my life for years; studying music, training myself and in general trying to make my vision more complete. And now that my vision is complete I think the people will hear and see a lot more of me. I think a lot of what is going on in reggae music today is too stereotypical and through my vision I would really like to change that. I would really like reggae to become a force to be reckoned with. This can only happen with artists that are not only there because they have the talent, but because they love the music and they want to create and offer more. I think one of the biggest problems in reggae music today is the lack of creativity."