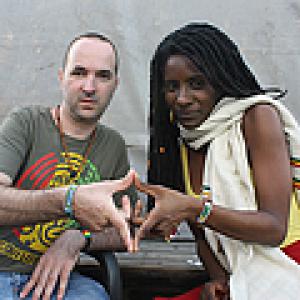 Jah9, in interviews as well as on your website, www.jah9.net, you refer to yourself not only as a singer-songwriter, but also as an activist. That's a pretty broad term, so what do we have to imagine that part of your life like?
Jah9: "I think I can best sum it up by saying I use the arts, whether it be spoken word, poetry, visual arts or dance to help inner city youths unlock their full potential. I'm just one person in a movement of young artists. In Jamaica, reggae music has been pushed back in favor of more US-influenced dancehall, so we try to make people aware of the importance of conscious music. In short, we push to give the arts the place they deserve."

I think I can say a lot of people will have gotten to know your name through 'New Name', a song that very quickly grew into something of a Rastafarian anthem. Your collaboration with Rory Stonelove eventually also resulted in an eponymous album. Talk us through how that all got started.
Jah9: "That whole relationship started when I was introduced to Rory by Gabre Selassie (radio presenter on Bess FM and soundsystem selector for his own Rockers Station Sound, red.). Gabre is a soundsystem operator focusing mostly on dub music. When he learned Rory was looking for a female vocalist to voice one of his riddims, Gabre decided the two of us should meet. When we met there was an immediate natural chemistry between the two of us. He just provided me with the music that suited me perfectly: down-tempo and very rootsy. One song led to another and eventually we started talking about doing a whole project together. At the time I was still working on another album project as well, but because working with Rory felt so natural and easy, I decided to give the project I was doing with him priority. In fact, 'New Name' was one of the last songs we recorded, but once I voiced that song I just knew it should also be the title of the album."

For that other album project you were working with Beres Hammond.
Jah9: "I'm not one of these persons who grew up wanting nothing else than a career in music. I went to university, got a job and my music was something I just considered to be a hobby. One day I met Sheldon Bernard, who is the keyboard player, flautist and musical director of Beres' Harmony House Band. He told me he was impressed with my work and thought it a good idea to introduce me to Beres. When Beres heard my music he was equally impressed and invited me to come and record at his Harmony House studio. Beres is an artist in his own right, so very often he would be out of the country because he had to do a string of concerts somewhere and that's why that album hasn't been completed yet. I'm hopeful to be able to release it soon, though."

As the daughter of a Baptist minister and now a devout Rastafarian, the Bible has played a big part in your life.
Jah9: "The Bible translation I'm using is the Scofield Reference Bible (The Scofield Reference Bible is a widely circulated study Bible edited and annotated by American Bible student Cyrus I. Scofield. Published by Oxford University Press and containing the traditional, Protestant King James Version, it first appeared in 1909 and was revised by the author in 1917, red.) and that version contains a lot of references, footnotes and what have you helping you to put things into context. I'm not reading my Bible as a history book; to me it's my daily dose of medicine. I'm not trying to take in everything at once either and that's where reading it a chapter a day really helps. I think you have to consider the contents of a book like The Bible on a metaphysical level, trying to unlock the truth hidden within the stories. I don't think we should limit ourselves to just reading the books that were included in what we today consider to be The Bible; there are a lot of so-called "lost books" that were banned by the church for some reason, but which also offer a lot of wisdom and insight. If you read the Bible in this way you won't be bothered with the contradictions you might encounter as you will find what you were looking for. It's by reading my Bible that I've discovered the prophecy of His Imperial Majesty is really manifesting itself. Haile Selassie I once described the Bible as a comfort ("…from early childhood, I was taught to appreciate the Bible and my love for it increases with the passage of time. All through my troubles I have found it a cause of infinite comfort.", Haile Selassie I on the Bible, red.) and that's how I consider it as well."

How do you look at the figure of Haile Selassie I?
Jah9: "When you consider His Imperial Majesty, you shouldn't focus on his physical appearance, but on what he embodied and the significance of his message in current times. In a era where none of the European powers were interested in an African emperor because they wanted to divide the African continent amongst themselves, with his grace and diplomacy he still prevailed."

You often quote "The Wretched Of The Earth" ("Les Damnés De La Terre", Frantz Fanon, 1961, red.) as having had a profound influence on you.
Jah9: "It's a book I would recommend everyone to read! "The Wretched Of The Earth" (a psychiatric and psychological analysis of the dehumanizing effects of colonization upon the individual man and woman, and the nation, from which derive the broader social, cultural, and political implications inherent to establishing a social movement for the decolonization of a person and of a people. The French-language title, Les Damnés de la Terre, derives from the opening lyrics of 'The Internationale', the 19th-century anthem of the Left Wing, red.) was banned in Jamaica for the longest time, but thanks to Frontline Distribution, a publishing company based in the United States and focusing on re-issuing Rastafarian and Pan-African books, I was able to get my hands on a copy. When I read it, that book ignited a fire within me. It's the sort of book you feel like reading again every so many years. "The Wretched Of The Earth" also shows that what our forefathers went through, they went through so that we shouldn't have to. It doesn't make sense to keep on hating for something that happened ages ago. Frantz Fanon writes in a style I can really relate to."

If there's one criticism that's often heard about Rastafarianism it's the fact it's rather patriarchal in nature. How do you cope with that as a young woman?
Jah9: "First and foremost, I consider myself to be an African woman, an Alkebulan (original name for the continent of Africa, meaning "land of the blacks" in Arab, red.) if you want, above all else. I consider myself to be Rastafarian as I hail Haile Selassie I as my spiritual council and government, but I don't affiliate myself with any of the houses. Yes, the Rastafarian movement is male-dominated, but in that it's no different from most things in this male-dominated world! (laughs) I think we should try to look past outward appearances and focus on the true intentions; consciousness and heart of who we deal with. His Imperial Majesty himself stated using terms like black and white doesn't help anyone ("I must say that black and white, as forms of speech, and as a means of judging mankind, should be eliminated from human society. Human beings are precisely the same whatever color, race, creed or national origin they may be.", Haile Selassie I on NBC's Meet The Press, October 1963, red.). It's all about trying to set our prejudices aside, because in the end we are all African!"