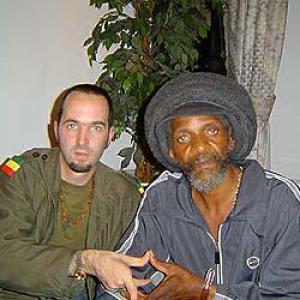 Jah Shaka! For lovers of roots and UK dub steppers this is not just a name but a battle cry. After three decades his reputation as a deejay icon still seems untouched. We had a rare conversation with the man behind the name:

Shaka, as an introduction, could you tell us how you got involved in music? Was it always music for Shaka or did you do something else before that?
Jah Shaka: "Well, music really, but I studied the history of the people, poverty and other things that effect the world in general and then put that into the music to enlighten the people about themselves and to show them what they can do to make a difference."

You do that through playing really heavy dub steppers or UK dub. What was it in dub that grabbed your attention; that got that hold on you?
Jah Shaka: "It was an era of music. The seventies era of music was completely different from now. Most singers and players were talking about love, unity and peace, like Bob Marley's 'One Love'. These were the topics back then. Today's topics are very different. So it were those topics, that togetherness that inspired me to do this music."

Your style is very unique and recognisable. One very remarkable thing is for example that you only use one record player when other sounds usually use two. What's the philosophy behind that?
Jah Shaka: "Well, I'm old school you know. When I grew up, people didn't even have soundsystems, they just had what we called a "gram", a little record player. The turntable I use is over 50 years old! It's not shop-made equipment. It's all handmade and I tune and specify it together with the builder to make it sound the way it does. It's completely different from buying something in a shop."

Jah Shaka is just one man, mixing and spreading the vibes. How do you see the future? Will the sound of Shaka still live on even after Shaka himself is gone?
Jah Shaka: "Passing the message, that is what it is all about. In what you are doing now it is significant that you are planting seeds that can grow. All sorts of people have been to Shaka dances, teachers, customs officers, people that tend certain positions in society now but who have been influenced by Shaka. Lots of seeds have been planted, so the Shaka-message can never die out. It's not like there are only leaves and branches, it's the root that can never die! So many artists were influenced by Shaka as well; people like Aswad or Maxi Priest came to our dances and picked up the message. We in our turn grew up with people like Dennis Brown, Gregory Isaacs and Augustus Pablo. So I am already talking about a whole era of people influencing and teaching each other. We were inspired by His Imperial Majesty to recognize certain artists before they were recognized by the world, so we were playing their music. At that time reggae wasn't played on the radio, so to bring the music to the people soundsystems were necessary. We, the deejays and soundsystems were there to promote records, promote artists and promote a philosophy and religion. Jah Rastafari. And for that, now we get recognized. That is also why we are still here today."

That's my next question. What is it that sets Shaka apart? After all these years there hardly seems any question about it: Shaka is still number one! What is your explanation for that?
Jah Shaka: "(laughs) It's Jah that really makes things happen! We give thanks for the part we were able to play in the development of reggae music. What makes it carrying on is the multitude of people of all races and places in the world listening to this music and taking it very serious. They saw the messages in the music come true! You had Bob Marley singing 'So Much Trouble' many years ago and today the people say: "That's exactly what's happening!". So people are starting to recognise these artists as prophets predicting things to come 30 years in advance. These singers were really messengers sent to guide the people, because in every generation Jah has never left the people naked. There's always someone there to show and guide them ever since Moses' time. Give thanks to Jah for letting us play such a big part!"

You have the name of the great Zulu king Shaka, so Africa must be close to your heart. I read somewhere that one of your dreams was to play a big dance in Africa. Have you realised that yet?
Jah Shaka: "Yes we've done that! We have played in Ghana in front of 50.000 people, then brought Kente Band from Ghana over to London to do 11 shows and then did a tour with them in Ghana again. Even greater things have developed from there because we met some people who liked what we were doing and the message we were spreading. So when we saw that clinics over there were in desperate need for equipment, we started to focus on that. We didn't want to go to Africa just to play music but also to start projects, like sending school books for example. In London they throw away old school books when they get new ones, so we collect them and send them to Ghana. We got 3 football teams there as well, where even talent scouts of Ajax and Feyenoord in Holland are coming to check the little boys out. We're involved in many things over there. It was never just about the music. The message brings you somewhere and then somewhere else and so on and on. We couldn't just go to Africa and not be part of its development. I was surprised when I wasn't called upon for this Live 8 event!"

I completely agree.
Jah Shaka: "They could even have made songs especially for that event. Instead of singing their regular songs just because they are big stars; they should have invoked the spirits of the people so they would continue to give, and those of the politicians so they would start to listen. We need that message to be hammered in! When they fight their wars like in Iraq, it's like a million Pounds for one bomb. That money could feed a country for six years! It's as simple as that. If you're not involved in things that tear the world apart, you might actually be able to repair it. Our message is there and more and more people all over the world are starting to link up with it. There are so many issues in the world still to deal with: war, crime, poverty, drugs..."

Rastafari! Thanks for this interview.
Jah Shaka: "Selassie I, bless His Majesty!"